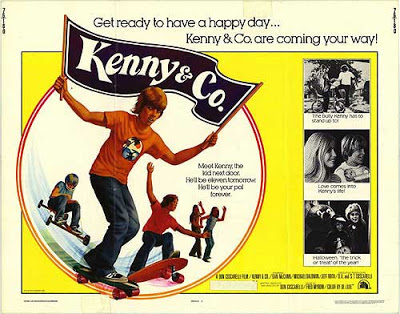 Anchor Bay released this on DVD back in 2005.  Since, it has gone out of print and is now hard to find and extremely expensive.  So, until it is re-released or more readily available, I was only able to view an incomplete film in seven parts on YouTube via some awesome dude named Phantasmed.  (Thank you).  However, because of that I can’t say my experience with the film was what I wanted it to be.  The aspect ratio was crunched down to 1:33 to fit an old television screen, so it was sort of... smushed.  Also, the different parts made for a short intermission every ten minutes.  And, the two parts missing were the last two.  Needless to say, this is not how Coscarelli would have wanted to show it, and if you have the opportunity to, buy it and watch it how it was supposed to be seen.  That being said, I’m just thankful I was able to see any of it at all.

When I heard Coscarelli had done a kids movie early on in his career, I knew I wanted to see it as soon as I possibly could.  What crazy treasures lie in wait as he unearths the secrets of childhood?

Coscarelli is a very talented guy.  This film shows his ability to capture the emotions of what it’s like to be a kid.  In some ways, I think Coscarelli is very similar to Bob Clark.  Their careers are somewhat opposite.  Where Clark started in horror and finally made it in comedy (Porky’s, etc..), Coscarelli started in heartfelt and honest comedy (this and Jim, the World’s Greatest), he made it with horror (Phantasm, Beastmaster, Bubba Ho-Tep). There are more similarities, however, as this feels very similar to A Christmas Story.  It is episodic and fragmented, portraying those cataclysmic moments of childhood.  And, also similar to Clark’s view of childhood, this is not a PG foray into kid-dom without caveats.  These kids swear, look at Playboy and witness violence.

Kenny (played excellently by Dan McCann aka best-name-ever) is a white kid in suburban 1970s America.  It starts with him playing flag football, his father watching expectedly.  Kenny gets called in because some other kid is sucking big time.  His friend Doug, (A. Michael Baldwin, aka Mike from Phantasm), is the quarterback and Kenny makes a great catch, but proceeds to run the wrong direction.  Luckily Doug runs him down and turns him around, then makes a (now illegal) chop-block to let Kenny dive into the endzone.  It’s a pretty wonderful image of friendship that Coscarelli plays on for the rest of the film.  This isn’t a dramatic / traumatic view of betrayal, but a portrayal of devoted friends.

At first, I thought this didn’t feel anything like the Coscarelli I know.  However, as it goes it just gets crazier and crazier and Coscarelli’s sensibilities shine through.  For instance, there is a moment later on when Doug’s dad is doing a show & tell thing about his job for their football team.  Doug’s dad tells them he is a Secret Service officer.  One of the kids asks to see his gun.  Doug’s dad says of course, unloads the gun and hands it to the kid!  The kid then proceeds to cock it and point it at the coach’s head.  Then, he pulls the trigger!  At this point I was laughing so hard, I couldn’t focus on what I just saw.

Anyway, I’m getting ahead of myself.  Kenny has to deal with all the regular problems of childhood.  He’s got a bully named Johnny,  which may be a trope nowadays, but for most kids this is still all too much of a reality.  The cruelty felt in school then, as now, is misunderstood by parents.  Here, Kenny’s dad tells him to stand up to the bully and punch him in the mouth.  Not surprisingly, this strategy does not go well for Kenny.

At the same time, Coscarelli isn’t painting a picture of a bunch of sweet victims.  Kenny and Doug have a little neighbor, Sherman, who wants to be their friend and they treat him terribly.  Granted, Sherman is super annoying, but the passage of cruelty from bully to victim to victim is so apparent.  At the same time, he shows how adults can shape the ways that kids see the world.  For instance, Mr. Donovan (played by the amazing Reggie Bannister aka Reggie from Phantasm), is a wonderful teacher who reaches out to the new kid, who speaks very little English, Paco.

The one moment that I found truly devastating was when Kenny learned that his dog, Bob, would need to be put to sleep.  Earlier in the film, Kenny takes Bob out to the backyard, and just lays by him as Bob is too old and sick to play.  There is a heart-destroying sequence where Kenny rides in the backseat of his parents car, clutching Bob tightly all the way there.  I remember that exact moment when we put down my childhood dog, Cathy.  At that point, I had never known sadness to be so deep and dark.  And, Coscarelli portrays it perfectly.  Kenny starts asking questions.  Not growing up in a religious family, Kenny’s parents leave the afterlife pretty ambiguous.  Soon after, Kenny and Doug witness a bloody car accident, leaving more questions.  Having been raised by a very Christian family, these questions were almost met with definitive answers.  Heaven.  God.  Hell.  Eternal life.  But, it was fascinating for me to watch what a young kid does with those questions when there are no concrete answers.  It’s exciting to see that ambiguity and existential mystery that he would later play off and expand on in the Phantasm movies.

And, that's where my viewing ended.  I can only speculate as to how it actually ends.  There is some allusion to Halloween and going into the crazy old lady's house.  I'm assuming this happens and goes badly.  I’m also assuming there is an awesome scare somewhere in there and that Sherman has his come-uppance.

Either way, however it ends up, I thoroughly enjoyed my time with Kenny and Company.

Here's a fan video with the theme song for you...

The Goods:
The Anchor Bay release has what sounds like a decent transfer and a trailer.  The YouTube version is an incomplete smushed mess in seven parts.  Which you can watch below.


you can watch it via Youtube, from Phantasmed channel: http://www.youtube.com/user/Phantasmed