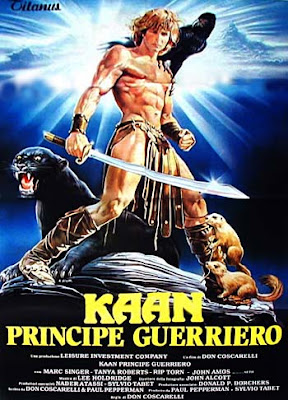 The 1980s was the decade of fantasy. Dungeons and Dragons was a phenomenon. A B-Movie actor was President. Heavy Metal was very much en vogue. Average people were doing tons of cocaine. Cable brought more information and entertainment into homes. REVENGE OF THE NERDS II was a movie.

The general premise of THE BEASTMASTER very much fits into that traditional D&D category of fantasy. Swords, sorcery, and a dude named Dar that can talk to animals with his mind. While films like CONAN THE BARBARIAN tried to make fantasy realistic, and movie like THE DARK CRYSTAL tried very much to distance itself from realism by using puppets, BEASTMASTER gives fantasy fans what they wanted. . . unabashed, FANtastic entertainment.

I'm going to come right out and say it. I hate sword and sorcery fantasy. It's totally goofy. Fantasy is generally dudes in leather undies riding horses speaking in some mixture of science talk and ye olde english.

So how does one get someone like me to watch a film such as BEASTMASTER? Truthfully, the only reason I gave BEASTMASTER half a chance was because it was Directed by the director of PHANTASM and BUBBA HO-TEP, Don Coscarelli.

I was right to trust Mr. Coscarelli's take on fantasy. BEASTMASTER is a pleasure to watch. The most important aspect of the film is it's pacing. A film like CONAN THE BARBARIAN for instance follows Conan from (esentially) birth to exacting his vengeance on James Earl Jones. It trudges along.

While BEASTMASTER (and tons of other fantasy media) shares a similar plot of revenge, Coscarelli doesn't dwell too much on the boring growing up and becoming a man BS. His assumption is that we understand what happens when people mature.

Maax (Played by Rip Torn) is a crazy cult leading priest/wizard. A crazy witch with a melted dough face tells Maax the king's unborn son will kill him one day. Since Maax seems to get off on sacrificing children (like any self respecting cult leader should) he aims to sacrifice the unborn child. Miraculously the king shows up and places Maax under arrest.

A dough faced witch follows through with Maax's wishes and transfers the fetus of the king's child into a cow. She then cuts the fetus out of the cow and attempts to sacrifice it. A passer by rescues the child by throwing chakram into the back of dough face.

This man becomes the baby's adoptive father. We come to find the child is named Dar (Marc Singer though I wish it was Marc Summers). . . and he can talk to animals. Dar's village is pillaged by Maax's cult. Dar's white german shepperd drags him out of the fray even though he's been shot by an arrow. Dar awakes to find his entire village wiped out. The cult was of course trying to find the boy that would one day kill their leader.

Dar sets out on an adventure  of vengeance adding several animals to his party. A pair of ferrets (Dar's cunning), a hawk (Dar's eyes) and a totally friggin sweet black tiger (Dar's strength). Throughout the film, Dar battles the cult using his animal allies. We see several tiger maulings, eagle eye pokes, ferrets taking arrows out of ballistas and other awesome animal action.

Thoughout his journey, Dar also joins up with humans. He meets a slave for Maax, Kiri, whom he tries to pork after "rescuing" her from his tiger. He also joins up with Seth (John Amos AKA Mr. McDowell AKA James from GOOD TIMES) . We get to see him in leather undies. . . . a blessing and a curse.

While I'm not completely familiar with high fantasy, I will tell you this: BEASTMASTER is better than The LORD OF THE RINGS series.

I have seen all 42 hours of THE LORD OF THE RINGS movies. I cannot remember a single defining moment. BEASTMASTER on the other hand has several jaw dropping moments: PEOPLE EXPLODE IN THIS MOVIE!

While the movie (thankfully) doesn't appear to be some allegory about Jesus and temptation, it kicks ass. It's entertaining. Which is more than can be said about THE LORD OF THE RINGS or almost any other fantasy movie.


While I am sure that this movie gets the, "Hey, this is PHANTASM in a fantasy setting" quite a lot, that's a fair assessment. It has the imaginative and over the top feel of PHANTASM. THE BEASTMASTER certainly has more in common with PHANTASM than a movie like THE HOBBIT.

Especially since BEASTMASTER delivers more action and sweet shit in 90 minutes than the entire LORD OF THE RINGS series does in 42 hours. This movie deserves a retroactive Oscar for being a dominant fantasy adventure.

- You'll also need some Mead and Ale. I would suggest learning how to brew both right after reading this.

- Make some dough masks. Wear them while pretending to be really sexy medieval witches. Preheat your oven to 400 degrees. Once the oven is hot, take the masks off and place them on a cookie sheet for 25 minutes. Don't eat them. They were on your face. Feed them to your ferrets instead.

- If you have a dog or cat, make sure you force them to watch this with you. Grasp them in your arms and point their head at the TV. They probably won't understand how important this movie is to them at first.

While a minor box office success, THE BEASTMASTER became a viewer favorite on cable. Many called TBS, "The Beastmaster Station" and HBO - "Hey, Beastmaster is On."