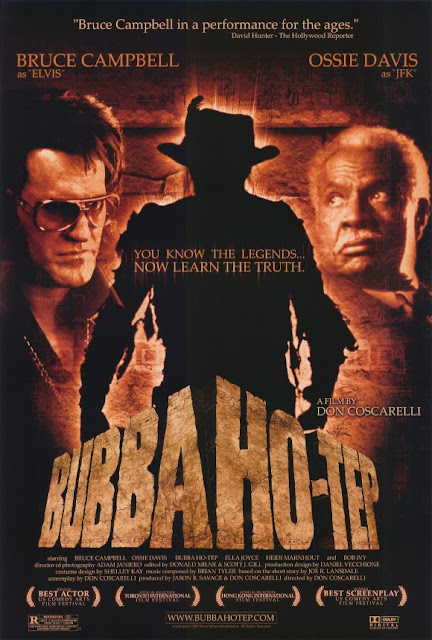 This is what people say about BUBBA HO-TEP: It's a crazy movie about an Elvis Impersonator and a Mummy.

Crazy is a word people use when they don't understand something. I'm not saying that some of what occurs in the film is not "crazy." I'm not saying I don't use the word "crazy." But BUBBA HO-TEP takes a wild premise and truly turns it into something human and very poignant (yes, I said it).

BUBBA HO-TEP is based on a novella by Joe Lansdale.

Screenwriter/Director Don Coscarelli is in my estimation, the only person on the planet that could have taken this story and given it the care, heart, and passion necessary for it to work. Coscarelli is most famous for the PHANTASM series. A series of films that is widely known for it's creative twists on a tired genre.

BUBBA HO-TEP does the same. The film takes what would be an absolutely ridiculous premise and turns it into something completely unexpected.

The story primarily takes place in a run down, filthy Texas funeral home (which with color timing, looks like a dingy pyramid chamber). The main character in our story is Sebastian Haff (Played by Bruce Campbell). Sebastian is wicked old. He looks like Elvis. He also claims to BE Elvis Presley. Sebastian is like most old men. Angry and ready to die.

Sebastian tells his Nurse, (Played by television veteran Ella Joyce) the whole story. He is Elvis. He found a great impersonator named Sebastian Haff. They traded identities. The new Elvis couldn't handle the temptations of fame and ended up dead on a toilet. While the real Elvis moved to a trailer park and opted for the simple life.

Elvis/Sebastian finds there is another famous resident in his nursing home. JFK (Played by the incomparable Ossie Davis). JFK's story is that the government dyed him black and put him into hiding.

The most bizarre part of all this is that it works. Campbell and how he explains his story makes for the most believable of Elvis conspiracies. Davis plays JFK with an heir of royalty. He doesn't try to BS a ridiculous Boston accent. He plays the role with the regality it deserves. 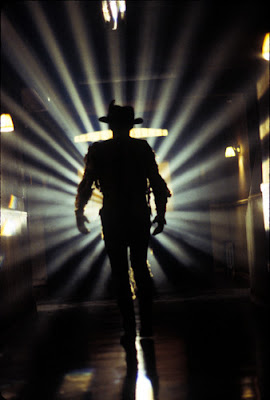 Enter Bubba Ho-Tep. The lazy redneck mummy. He looks like Billy Jack in mummy form. He's come to the nursing home as a path of least resistance. It's easier to steal souls from the old and feeble than the strong.

Elvis and JFK join forces to stop the mummy onslaught.

Yes. This is an absurd premise. While I have never read the novella upon which this movie is based, the story takes all of the wackiness and more than manages to represent a very mature and and complex story about one's will to survive and what it means to grow old.

Coscarelli somehow took a premise about Elvis, JFK, and a mummy that sucks souls from assholes and turned it into something meaningful on the screen.

While I am focusing on the more serious aspects of the film, there are quite a few jokes and funny moments. The humor and tone of the film remain light and entertaining. There is certainly a comedic edge to the film that ties everything together.

This review is extremely biased. BUBBA HO-TEP is one of my favorite movies of all time. I will be the first to admit, the premise got me in the door, but the outcome of the story and the heart this movie displays changed my view of what a movie could portray and how a movie could make me feel.

My final comment will be that this is certainly not for everyone. Fair warning: this is not an action movie. The premise is out there, but it is a much more "real" feeling movie than most will expect. It has something to say. This isn't Elvis with a machine gun shooting hordes of mummies. If you are looking for a romp, best look elsewhere. This is more arthouse than summer blockbuster or horror romp. The movie is totally "crazy" for not being what anyone expected from the premise and it's all the better for it.

We don't give ratings here at ASV. But I give BUBBA HO-TEP my highest recommendation. 10/10. A+. Thumbs Up. Doggie wearing a spaceman suit. 5 Stars. Best movie ever man.