Review: JOHN DIES AT THE END

Directed by Don Coscarelli
2012
100 mins.  Color.
Available On Demand and in Select Theaters. 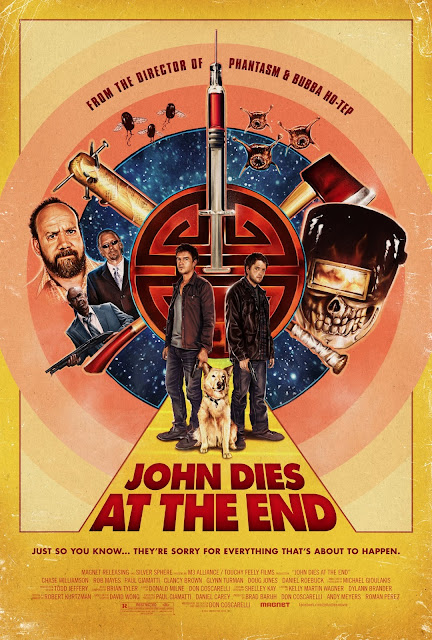 I first heard about John Dies at the End about two years ago.  I have been waiting expectedly since.  I wouldn't say it's brilliant or deep.  But, it's fun, original and entertaining and I loved it.

This is a film about fighting evil, drugs, a sweet dog named Bark Lee, giant insects and monsters made out of frozen meats.  Coscarelli saw the fun in two friends taking on an evil that could destroy the world.  Directly in the vein of Phantasm and Bubba Ho-Tep, John Dies is about the heroes who come out of obscurity, and who can only rely on each other.

Like all of Coscarelli's films, this is a hard one to summarize. It's hard to talk about what the film is really "about" without just doing a play-by-play of each scene in the film and trying to make something out of the madness.  (I won't dothat to you, though) It's told out of order, jumping back and forth, at times is seemingly episodic and leaves you in the lurch.  Feels about right.  Phantasmesque in story-telling, Bubba Ho-Tepesque in style and humor.   The thing that feels different about these heroes is that they are completely apathetic.

As much as I hate to say it, I could see this as a dorm room movie that will get huge with dudes who have the munchies.  I only say that as I think it would be a shame if this movie were relegated to college stoner status.  It deserves better than that.

The film opens with a riddle involving an axe handle and a large decapitated undead dude with a swastika tattoo on his tongue.

Arnie Blondestone (the always great Paul Giamatti) shows up to a chinese restaurant to interview David Wong (a very deadpan Chase Williamson).  Inexplicably, Dave explains that he knows exactly how many grains of rice are on the plate that the waitress is carrying, he knows where it came from and who grew it.  The first statement, luckily, from Blondestone is "You don't look Asian."  My first thought, exactly.  Dave's response, "I'm not.  I changed it to be harder to find.  Wong is the most common name on the planet."  Fair enough.  Blondestone is a reporter and Dave explains that he wants to get the truth out.  He wants to share the exploits of him and his friend John.

In an internal monologue to the audience, Dave relays what he doesn't think Arnie could handle.  The fight he and John had with a monster made out of the meat in the freezer, a penis door-handle, a girl that turns to snakes...  Yep, we're in Coscarelli territory here.

Dave is currently high on The Soy Sauce, a sentient other-dimension mystery drug that causes the user to know things that otherwise would be impossible and "bend" reality.  It heightens senses.  He knows the exact change in Arnie's pocket and the dream he had last night.  As John will later tell Dave, "I'm remembering stuff that hasn't happened yet."

And then we start at the beginning, and the prospect that John may help bring about the end of the world.

The film is crazy, yes.  There is a Bill and Ted's Excellent Adventure feeling to it all.  (That is not a bad thing)  But, just as Phantasm was surreal and existential, so here Coscarelli refuses to make a simple stupid story.  Playing with the notion of time and reality, he calls into question fate and self-determinism.  For instance, take this monologue from the Detective (played by the awesome Glynn Turman, aka Mayor Royce from The Wire)

"There are some very dark things happening.
And, I've got this lonely feeling like I'm the only one who knows, the only one who can do anything about it.
Everybody's got a ghost story.  UFO or Bigfoot.
You know what I think?  I think there's both real and not real at the same time.
I'm not a Star Trek fan.  I don't know much about other dimensions and all that.
I'm an old school Catholic.  I believe in hell.  I believe it's more than just murders and rapists.
I believe in Demons.  Worms.  Vile Shit.  The grease trap of the universe.  The more I think about it, the more I think it's just not down there.  That it's right here.  With us.  That we just can't perceive it.
It's kind of like a country music station.  It's out there.  In the air.  Even if you don't tune into it." 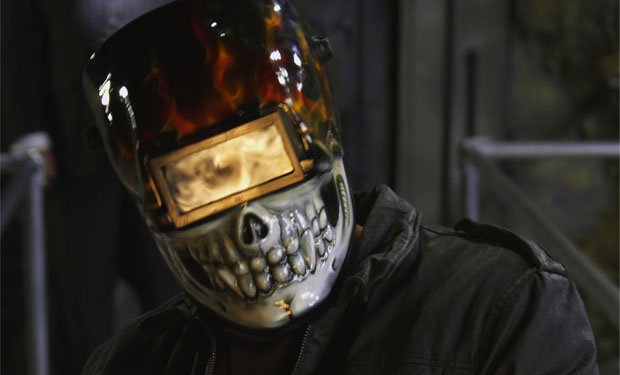 There are so many elements here that are fun to watch, it's hard to not just tell you everything.  The great cameos and outstanding story-telling. But, it seems that something like this should just be watched to be enjoyed.

You can watch it by renting it on iTunes, VUDU, Amazon, XBOX, Playstation, Direct TV, etc....
You can also find theaters that are playing it here: http://www.johndies.com/watch.html

Opens at the Lagoon Cinema in Minneapolis on March 8th.