Let me start this off by saying, I’m a PHANTASM neophyte. This fact really bothers me. All the years renting CHOPPING MALL and HELL HIGH, I always saw PHANTASM at the video store and never rented it. All I knew about the movie was that there was this giant pinball that flew around and stabbed people. I was completely unaware of the type of movie it was.

I didn’t view PHANTASM for the first time until March of 2012. Being a fan of Horror and Sci-Fi movies most of my life, I now view this indiscretion as a heinous crime against nature.

PHANTASM is one of the most creative, action packed, and exciting films in the horror genre. It rarely follows horror conventions. The movie is a strange hybrid of Horror, Sci-Fi, and unabashed craziness. The result is one of the most original and entertaining movies I have ever seen.

The movie starts with a dude with a Foghat Mustache having sex with a blonde in a graveyard. While seducing Foghat, a dagger appears in her hand and she drives it down into Slowride’s chest. We then discover this woman is a shapeshifter of some kind as the final shot we see of her is a sinister looking grey-haired man. . . Yes.

We find out quickly that Foghat’s real name was Tommy. Tommy was best friends with Jody and Reggie. Jody is a rocker. Reggie is an ice cream man/rocker. Jody has a thirteen year old brother named Mike. Jody and Reggie like Mike and treat him well, especially since his parent’s died.

The only problem is Jody wants to move on. He wants to stop taking care of his baby brother and ship him off to his aunt’s because he is always tagging along and spying on him.

Speaking of Mike spying, he was told to stay home and not come to Tommy’s funeral. He rides his sweet motorbike through the cemetery and sees a sinister looking grey haired man in a black suit power lift Tommy’s casket into a hearse. . . all by himself.

This grey haired fellow is the known as the Tall Man (Played by Angus "I'm perfect for this role" Scrimm). He is the main villain of the series. This was another reason I was not terribly interested in the movie when I was a kid. I thought compared to Freddy Krueger and the robots from CHOPPING MALL, the Tall Man was lame. I was wrong. Here is what I know about him:

The Tall Man:
- is a Shapeshifter
- is Immortal
- is a Mortician
- has mustardy/pudding blood.
- is a Necromancer
- Supplies human zombie dwarf slaves to another planet.
- is totally pissed off for some reason.
- his severed fingers turn into giant evil insects.
- has giant flying pinball sentinels that bore into people’s brains.
- is probably (?) an alien.
- is much more badass than Freddy or some damn mall patrolling robot.

The rest of the film is the pursuit of the mysterious Tall Man. Mike is worried about what he saw at the funeral. He has nightmares. When he goes back to the funeral home and mausoleum, the poopy hits the blinds. Mike proves to Jody and Reggie the Tall Man is not of this earth and the hunt is on.

A bunch of really sweet stuff happens and then the movie ends.

WHY IS IT GOOD?

The movie defies all convention. When you think something is going to happen, something else completely happens. Crazy stuff like mustard pudding blood, white rooms filled with black rubber barrels, unexplained flying cerebral bores, shapeshifting, shotguns, portals to other planets. Nothing is explained to the viewer and while the content of the movie could all add up to something bigger, I’m not convinced it does. I’m convinced that Director/Writer Don Coscarelli is a genius.

In contrast, the characters are logical beings living in a very dark world. For instance, when an evil insect attacks, Jody and Mike wrap it up in a shirt and toss it into the garbage disposal. When certain things occur, characters use tangible means and objects to correct the situation. Always within reason. . . no one ever runs upstairs while being chased by an evil force.

Coscarelli shows a command of visual depth, sound, and dialogue on top of what may be the craziest movie of the 1970’s in terms of subject matter. Many of these crazy things that occur in the movie don’t add up to any big revelation of a larger meaning, but everything is so damn fun none of that matters.

Visually the film does a lot for a very small budget. The ball sentinel (AKA silver pinball thingy) has animated blades and while the effect is crude, it’s very cool. Spatially some shots are beautiful, while most of the film has a pretty gritty look and feel. There is a great variety to the visuals and it keeps the viewer on their toes. You’re never quite set into a particular style. The POV shots from the ball sentinel are black and red. There’s an animated victorian photo of the Tall Man that’s sepia. These variations really set this movie apart from most films in the genre.

Some key lines in the movie:

“You play a good game boy! But the game is finished and now you die.” - The Tall Man

"What the Fuck? (mouthed, not spoken) - Mike

“We gotta snag that Tall Dude and stomp the shit out of him and we’ll find out what the hell is going on down there.” - Reggie

“You gotta be shittin’ me man! That mother’s strong!” - Mike


When I add up all the parts of PHANTASM, I am reasonably sure that it may be one of the most bonkers films ever made. Truthfully, that is exactly why I love it. Personally, I don't want a movie to resemble reality. I want slave dwarves with butterscotch blood. I want casket powerlifting. I want exploding hearses. I want to escape to something fantastic. PHANTASM is fun. If you haven't seen it, watch it immediately. Do it, "BOOOOOOOOOOY!" or you will be pissed at yourself when you finally see it. 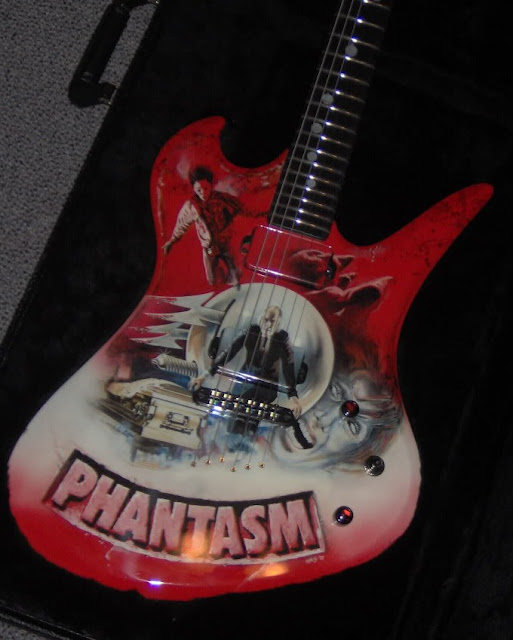 - If you do not already own a Chrome Colt 1911 or Twelve Gauge Shotgun, buy one. Or both. Clutch them tightly while watching. Maybe even squeeze off a few rounds into the couch during the exciting parts of the movie.

- Get a casket. Put you Mother in it and see if you can successfully lift it by yourself. Have a laugh with her about how you're practicing for June 7th of 2034 because you are psychic and you know that's the day she will be buried.

- Get some Meatballs, Falafel, Gumballs, Cheeseballs, Oranges, Sourballs, Lollypops, Round Melons, Rocky Mountain Oysters or any other spherical food to snack on.