Review: PHANTASM III: THE LORD OF THE DEAD

PHANTASM III: THE LORD OF THE DEAD
Directed by Don Coscarelli
1994 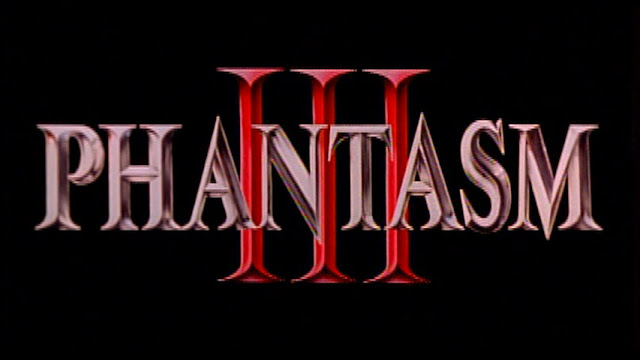 PHANTASM III essentially picks up right where the second left off. Except Mike looks . . . different. Michael Baldwin was brought back to play Mike (which is awesome).

This time, the story revolves around the capture of Mike. The Tall Man takes him and tries to turn him into . . . another Tall Man (?).

Reggie, of course goes on a rescue mission. Many of Mike's scenes take place in alternate realities (or dreams?). Jody is back. He's a sentinel ball. It's now revealed that sentinels have brains and eyes inside them.

The world of PHANTASM III is more desolate and more grim than previously depicted. The world is seemingly a giant ghost town. Reggie drives the Cuda around searching every cemetery, mausoleum, and funeral home for the dreaded Tall Man. Reggie meets some new friends in his travels.

Rocky is a black female commando with a wicked flat top. Reggie meets her in a mausoleum while hunting the Tall Man. She has sweet nunchuks. Reggie wants in her pants and even though he's hot as love, gets no where.

Reggie meets Tim (a small boy) at a random house along his journey to rescue Mike. Tim is a tough kid that is proficient in throwing tomahawks into the forehead of scavenging women and shooting sentinels with a six shooter. His parents were taken (aka - zombified) by the tall man.

This movie takes the same general formula of PHANTASM II. In the series tradition, it's a crazy action flick with tons of surprises. But this time, it's funny. Not that the previous films lacked humor, PHANTASM III is almost on par with a movie like ARMY OF DARKNESS in terms of tongue in cheek (The psycho nurse, the looters, the rain of dead lurkers etc.). While looking at the four PHANTASM movies on the shelf, III is certainly sticks out as the most fun. The effects are shocking, often, and really well done(sentinels through heads, frisbee throat slits, the "zombie" make-up). The new revelations are bizarre. It's certainly not my favorite, but I believe it offers the most fun experience of the four movies. However, without seeing at least the first movie, I could only imagine this movie would be an ever bigger WTF to swallow.

The movie certainly has some flaws. The main one being the additional characters. While it doesn't bother me too much, Rocky and Tim are gone at the end of the movie. The characters are developed and disappear by the end. It makes it all the more strange that Rocky and Tim are the only characters aside from Mike, Jody, Reggie, and the Tall Man that feel worthy of acceptance into the universe. In a way, their appearances as a one off does make this movie stand out, but I really came to like them.

All in all, PHANTASM III: LORD OF THE DEAD is a very worth addition to the PHANTASM series. It ups the ante on humor and character interaction. And truly, since you are not a dumb bastard, you will watch it and you will like it.

This movie supplies more than adequate levels of dominant carnage. You will want to prepare for that. Here are some suggestions:

Since it's the interdimensional zombie-dwarf apocalypse, you may want to consider the implications. You will need food that will not perish during the death of the earth. Oprah said Honey never goes bad. Get tons of honey.

The final words in the credits read: Unauthorized duplication, distribution, or exhibition may result in civil liability, criminal prosecutions, and THE WRATH OF THE TALL MAN.