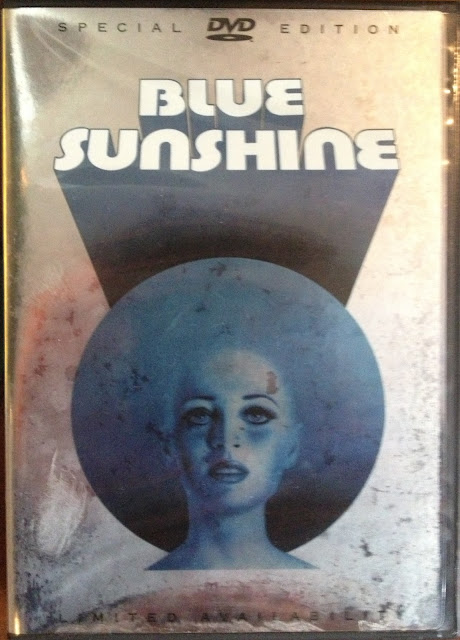 This film is a masterpiece of the genre, and I feel as though I just saw something that was greatly missing in my life.

Jeff Lieberman had started his career at the best distribution company in the world, Janus Films.  He then made Sqwirm and would later go on to direct the awesome-looking Remote Control.  I had the opportunity to meet him at Cinema Wasteland, and instead just kind of looked at him awkwardly.  Had I seen this film before I had the chance to meet him, I might have said something.  But, probably not.  Either way, I'm just happy to now have seen it.

Made for $550,000, Lieberman created a fantastic hippy nightmare.  In the United States, the 1960s started with fantastic enthusiasm and optimism.  However, by the end of the decade, the country's hopes were in ruins.  The assassinations of MLK, Malcom X and RFK, along with the Manson Family massacres and the deaths at Altamont had dashed any sense of optimism for the left.  Likewise, Watergate threw a wrench into the right's belief that you can always trust authority.  By the late 1970s, there were no institutions that could be relied on.

Blue Sunshine comes directly out of that aimless malaise of the late '70s.   There is a hopeless absurdity to the madness, but the film seems to seek for meaning in all of it.  Right on the cusp of the 1980s, and the coming slasher craze not yet in swing, some of the most exciting and creative films came out in those years.  Blue Sunshine stands up next to George A. Romero's brilliant anti-capitalist Dawn of the Dead, Larry Cohen's religious commentary God Told Me To and Philip Kaufman's incredibly paranoid Invasion of the Body Snatchers.

The Rundown:
It's been a year since Wendy Fleming and her up-and-coming politician ex-husband Ed split up.  Now, she is having terrible headaches and losing her hair.  In clumps.

Doctor David Blume is also having headaches, and he's finding piles of his hair all over the place.

Jerry attends a swinging party with his GF Alicia.  One of the party-goers, Frannie Scott, thinks he's Bing Crosby and starts singing for the group.  He then kisses one of the ladies, whose boyfriend doesn't appreciate it.  The boyfriend tries to pull him away by his hair, but pulls off a wig, exposing Frannie as a crazy bald man, who proceeds to run away. Jerry goes after him, with hopes of helping.  When he returns to the party-house, he finds the crazy bald man has forced one of the women into the fireplace, burning her alive.  Jerry goes after baldy, and is then blamed for the murder.

To clear his name, Jerry starts making connections.  In one of the more amazing sequences in the film, he heads to the site of a murder, where the killer apparently went bald and then murdered his entire family.  The event is re-imagined completely in sound, while Jerry looks at chalk outlines.

He then finds a picture of Ed Fleming with Blue Sunshine written under it.  Could the politician be wrapped up in all this?  What is Blue Sunshine?  What does all this have to do with Stanford in the 1960s?

Oh, and a huge bald dude goes "batshit" in a disco-tech, tossing suckers around and grimacing.  It's sweet.


The Evaluation:
For the paranoia of the consequences of the stupid choices we make as young people, it gets no better than Blue Sunshine.  The performances are great, the effects are outstanding and plotting is fantastic.  The pacing is perfect, it just keeps building and building until it comes to a great conclusion.  It also continues my theory that I have still not seen an American film from the 1970s that wasn't at least worthwhile for it's genre.  Plus, you get to see a bunch of people wearing bald heads.  This is definitely worth checking out.

The Goods:
The 2-Disc Special Limited Availabilty Synapse DVD is great.  The artwork is wonderful and the transfer is perfect.  It keeps the grain, but doesn't let it overpower the image.  The second disc is the soundtrack, which is awesome.  You also get a sharp-looking booklet with a very interesting essay (my favorite type of extra on any release) by Michael Felshier and Edwin Samuelson.  The special features are dope as well.  You get The Ringer, a short film by Lieberman, as well as an interview called Lieberman on Lieberman, and a cool comparison of the original and the restoration.