Review: HELL OF THE LIVING DEAD 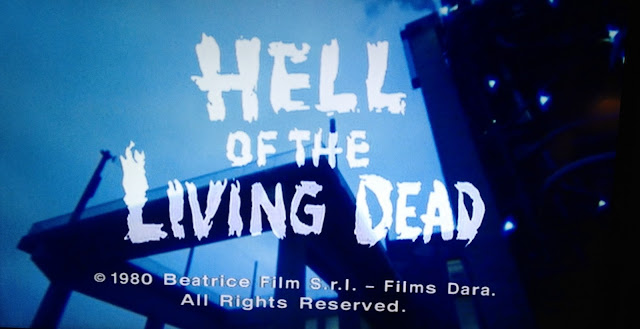 Bruno Mattei is probably a genius.  Being the director of such a gem as Jaws 5: Cruel Jaws, he is a ripoff artist like I've never seen.  He made over fifty films, including a Night of the Living Dead ripoff called RATS with killer rats, which is most definitely awesome.

George A. Romero's brilliant 1978 film, Dawn of the Dead was a huge film in Italy.  It caused a huge shift in Italian horror film-making for a decade.  Titles like Lucio Fulci's Zombie is intended to be a pseudo spin-off sequel.  Likewise, Hell of the Living Dead continues that tradition, intending this film to be a continuation of Romero's series.  Mattei, directing under the pseudonym Vincent Dawn in this film, goes so far as to actually use the Goblin soundtrack from Dawn of the Dead.  He also uses the exact same blue uniforms that Ken Foree and Scott Reiniger wear from the same film.

The Rundown:
A nuclear power plant has some kind of leak and all kinds of brilliant scientistos get messed up and start killing each other.

Meanwhile, the before mentioned Dawn ripoff commandos take out a group of terrorists and perform special forces actions in some undisclosed third world country where Carlos Santana-looking aid workers get dominated by adorable undead children and zombified priests.

Close-up naked boob shots, automatic weapons, zombie tribe riot massacres, a dude throwing up like milk or something and the destruction of the UN seem to mess things up.


The Evaluation:
Well, there isn't really anything new here, it basically re-treads the same ideas as other zombie films of the time.  Not anywhere near the awesomeness of Jaws 5: Cruel Jaws, it still makes for a great time.  It's nice to see Mattei try to keep some continuity with Dawn as far as zombie design goes (blue face paint and orange blood).  However, that same continuity was pretty distracting.  The gore is pretty fun (and funny) and all the rip-off stuff from Dawn is hilarious.  If you're a fan of the genre, I can't see how you wouldn't enjoy it.  And, a woman gets a hand shoved in her mouth and her brains pushed out.


The Goods:
Blue Underground is always to be trusted.  You get a fun trailer, a great 9 minute short called Hell Rats of the Living Dead about Mattei, and a biography.