Review: GOD TOLD ME TO 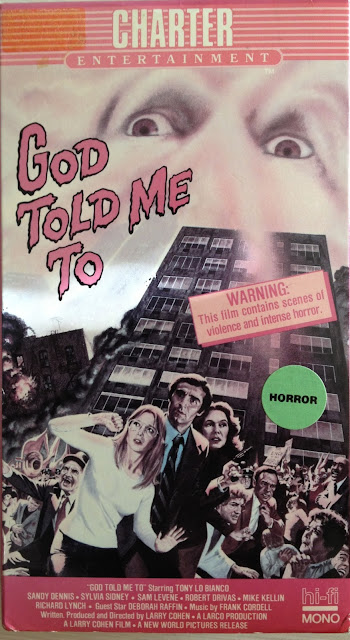 Larry Cohen is one of those rare genre directors that manages to make his films brilliantly political and keep them extremely entertaining.

Raised in suburban New York and later the Bronx, Cohen was at City College in the 1960s.  Naturally, as a young man in New York, he became radicalized by the events happening and would use his education to bring deeper insight than is usually seen in films of this ilk.  He helped make some of the best Blaxploitation films of the early '70s, and continues to write interesting original films.

His older films seem to be increasingly relevant, but I guess that's the thing with satire.  However, if you go into this film thinking it will be similar to The Stuff in style, I think you'll feel it's a bit too serious and a bit too long.  This film is a much more serious foray into religion and the supernatural.

God Told Me To starts with a sniper on a busy New York street.  The shooter takes out multiple victims with almost superhuman accuracy.  When veteran cop Peter (Tony Lo Bianco, French Connection) finally gets up to talk to the shooter, the only reason he gives is, "God told me to," before he jumps to his death.

A few days later, Peter gets a tip that there will be a similar massacre at the St. Patrick's Day Parade.  He tries to get the attention of the police, but it's one of the officers that takes out a gun and starts randomly shooting.

The film quickly turns into an X-Files-esque mystery story, with Peter seemingly always a step behind, and pretty much fighting every witness he comes across.

As he seeks out the truth, Peter finds that he is intimately involved himself.

It's always tough writing a review of a film that is essentially a mystery story.  The story takes a few different twists, and the end can be taken a few different ways.  But, the main feeling here that Cohen leaves us with is an uneasy acceptance that we've been lied to all our whole lives.  I don't think he's only pointing out religion, but instead that there is simply something more complicated and grim than it all appears.  At one point, Peter turns to his wife and says, "I always felt like God was with me.  But, it was never him at all."

I obviously really liked this film.  Creatively shot and carefully plotted out, it slowly opens up and makes itself more and more complicated.  The senseless violence of the first few attacks felt eerily current and horrifying.  It left me wanting answers and knowing that none of them are satisfying at all.

Set Yourself Up:
Trivia:
The Goods:
I found the VHS pretty cheap at Cinema Wasteland, and I'm happy with it.  However, Blue Underground did put out a pretty good looking DVD in 2003 that's still not out of print.