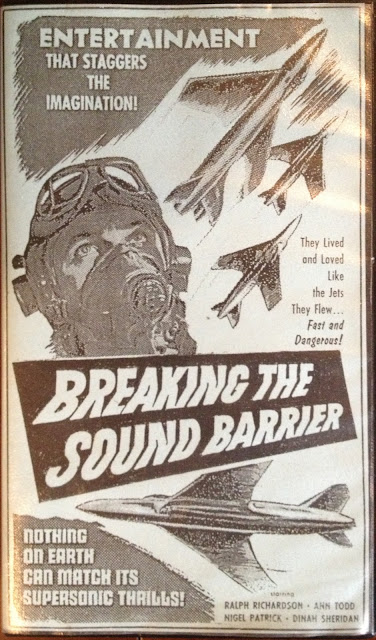 I am a late-comer to David Lean, and that is a shame.  Lean is the brilliant auteur behind Brief Encounter, Bridge on the River Kwai and Lawrence of Arabia.  His films are either epic or deeply personal, but successful no matter which.  Technically amazing and politically complicated, each film is an experience.

Phillip is a great pilot, who won medals and such in WWII.  His buddy Tony is also a great and fearless pilot.  Tony is in love with Susan, who is the rich daughter of a rich aerospace mogul John Ridgefield (Ralph Richardson).

Tony and Susan get married and head to Susan's home so Tony can meet Dad Ridgefield and her brother Christopher.  Christopher is a terrible pilot-to-be, but is doing his darndest to please Dad.  But, his darndest gets him killed.

Ridgefield offers Tony a job as a test pilot for his company after the war and Tony takes him up on it.

Now, if all this sounds dull, it really wasn't.  Lean is able to pace it wonderfully.  Sure, the acting is melodramatic and it feels a bit "dated."  However, what makes this film work is the outstanding script and well shot photography.

What could be a bland and shallow film in the hands of someone else, Lean turns into a debate on the merits of such acts.

According to the film, the sound barrier is 750 mph (Mach 1).  Much is made of the question, "What exactly happens to an airplane at the speed of sound?"
As an answer, Ridgedale only says, "We will name the plane Prometheus.  He stole fire from the gods."
Tony asks, "He had a pretty sticky end, didn't he?"
"Yes, but gave the world fire."
That is basically what the film is all about.  It's a question of sacrifice and the weight of guilt in the face of obsession and exploration.

Lean doesn't couch the film in technical jargon or lose the audience in long and boring sequences of flying planes.  Instead, he spends equal time at home with Tony's wife, and the torment she goes through each time he flies.  Her questions also became mine.
She simply asks, "What purpose is there in risking lives to break the sound barrier?"
Ridgedale replies, "What purpose did Shackleton have to go to the South Pole?  It must be done."

The wonderful thing that Lean does here, is leave you with that very unsatisfying answer.  Sure, it was exciting.  But, was it worth it?

Breaking the Sound Barrier is definitely a minor film in Lean's ouvre.  Made for TV in 1952 it is, unfortunately, unavailable on DVD in The States.  Because of that, I bought this bootleg VHS.  Though the quality was what you might expect, I still was impressed with all the aerial photography.  Ralph Richardson's performance as the obsessed mogul is extremely impressive.

*Spoilers Below.  Please don't read if you haven't seen the film*
Likewise, Lean makes some very gutsy and unexpected choices in the latter part of the film that really made me love it.  For instance, Susan's constant anxiety becomes the leading emotional force behind the first half of the film.  Then, in what seems to be the climax of the film, Tony loses control in his attempt to break the sound barrier, and he crashes into the ground in a blaze of fire.  Susan is left a pregnant widow, and Lean lingers over the smoking hole in the ground for what seems an eternity.
Then, Philip takes over the lead test pilot job, and as he finally appears to be breaking the barrier, Lean leaves the camera in Ridgedale's office with he and Susan, while they listen to Philip over the radio.  Simply inspired film-making.
*Spoilers End*

From what I've read in other reviews and in Errol Morris' wonderful book, A Wilderness of Error, there are apparently tons of things in this movie that are not factual, especially details relating to flying, so if you care about that stuff, I guess, well, it might make sense to just read manuals or something.

Bootleg VHS.  Looks and sounds like a bootleg, but I'm happy with it until there is a better option.