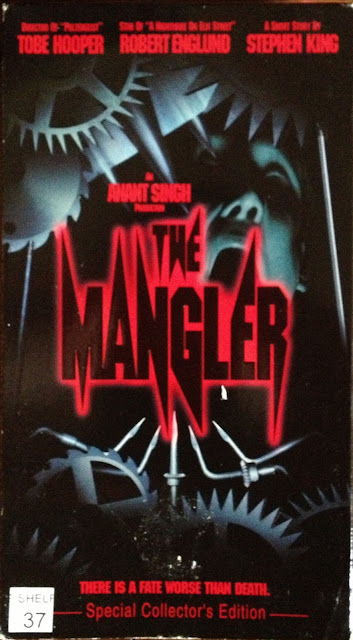 Tobe Hooper has directed some great films in his career.  Texas Chainsaw Massacre is touted so often that you might be tempted to play down it's greatness, but you would be mistaken.  It is a gritty, mean, and extremely important piece of independent film-making.  It absolutely changed the horror industry.    Likewise, Poltergeist and Salem's Lot hold up pretty well.  And then, in 1995, Hooper made The Mangler.  Well, most of it, anyway. He was replaced by Avant Singh near the end of production.

With that kind of pedigree, you can expect this movie to be a mess.  And, it is.

Giant gears, oil, steam, black smoke... these are the things that make up the terrible industrial laundry known as Blue Ribbon Laundry. Sherry is trying to tighten a belt on the machine and then some dudes get an ice box close, causing lighting to shoot out of said machine.  (what time period is this supposed to be?  Crazy old folding machines and ice boxes (that are inexplicably electrified)?

Old lady Mrs. Ellenshaw loses her pills in the machine and tries to reach in to get them.  The Mangler pulls her in and, well, mangles her.  Meanwhile, Robert Englund as the crazy old factory owner with metal legs, yells and curses.    Pill addict Officer John Hunton (the always awesome Ted Levine, aka Buffalo Bill from Silence of the Lambs, / talks like he has a wad of paper towels in his mouth) is called out to investigate.

Hunton tells his friend / neighbor / brother-in-law, Mark, that it's the worst he's ever seen.  They are having a pretty non-insightful conversation about how truth is never inscrutable when there is another accident at the laundry.  After visiting  one of the victims, they are convinced that the machine has a "taste for blood."  Mark introduces the idea that the machine may be haunted.

Mark and Hunton have a lot of conversations about philosophy and magic while eating.  Always eating.  The ice box kills a little kid and Mark believes it is a "transferance of evil."  It then tries to take off Mark's arm, and Hunton responds by beating it with a hammer until a giant blue ghost comes out of the top of it.

Then they start a crusade to end the terrible mangler's existence that would pit Hunton vs. Demon Machines, the elites of society, Grot from Metropolis and so on.

This movie was actually made, funded and released.  Makes you wonder what doesn't make it, doesn't it?

As stupid as all of this sounds (and it is even dumber than that) this actually is pretty watchable.  If this were made today, it would be deeply ironic.  It would all be played for jokes that aren't even remotely funny, and would be unrelentingly dull.  However, Hooper plays it straight.  Only Englund plays it over the top, but I'm pretty sure that's the only way he can play anything.  Because it's not riddled with bad jokes and puns, the absurdity of the film can be taken on it's own merits.  We, as the audience, get to decide if there are actually worthwhile ideas in a film about a killer laundry folder.  (there are not)   There is no tension or actually scary moments in the film, but they shoot it like there is.  The art direction is kind of fun, and scenes like Hunton shooting holes in his coat to escape the machine are pretty funny.  I think a little more insanity would've made this more enjoyable.  There is too much "research" and "character development."  Until the end.  The last 15 minutes gets pretty damn awesome.  However, there is absolutely no reason a movie like this should be over 80 mins.


The Goods:
This tape started out very rough.  There were trailers for Mortal Kombat, National Lampoon's Senior Trip, some weirdly serious film called Once Were Warriors, and then...  the awesome looking Excessive Force II: Force on Force (which I definitely want to see and may be the best thing to come out of watching this)