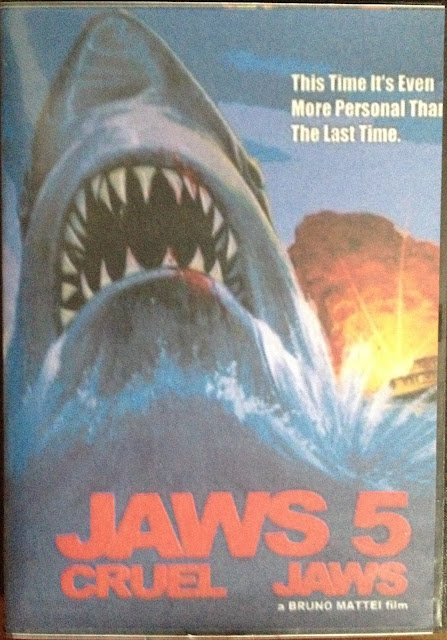 Jaws hates divers.  They mess with his stuff.  He also hates boats.  So, he does away with them.

"This time it's even more personal than the last time."

I was pretty sure that Jaws: The Revenge was about as personal as it could get between Jaws and the various humans who want to kill Jaws, but apparently not. - The plot of that movie has something to do with Jaws seeking revenge on whoever tried to kill his shark friend in Jaws 3D. (Full disclosure: I have not seen Jaws 2, Jaws 3D or Jaws: The Revenge, so it's possible that this is in fact less personal, but I am going to take their word for it.)  I probably wouldn't have seen the made-for-TV movie Jaws 5: Cruel Jaws if it didn't have the sweetest title and tagline ever.  It also had Italian schlock-meister Bruno Mattei at the helm and was on a ridiculous-looking Japanese bootleg.  so I thought I'd take a chance, and I am so glad I did.

The goofy-looking couple of marine biologist Billy and his girlfriend Vanessa, who drive an RV, go to see Hulk Hogan, and are shocked when his daughter, Susy, is pulled out of the water and put into a wheelchair.  In fact, they look disgusted.  Hulk Hogan apparently hasn't been the same since some type of accident happened and his wife died.

Officer Patrick Duffy comes to visit Hulk Hogan and let him know he needs to pay the rent on his Sea World ripoff company.

Jaws attacks and eats some co-eds.  The authorities want to close the beach, but the money-grubbing capitalists are fighting it.  (Yep, the exact same plot as Jaws).

Anyway, Gloria has a crush on Bob, which pisses off her dad Ronnie.  Bob kisses Gloria, so Bill and his buddies pound Bob and then attempt poison Hulk Hogan's dolphins.  (yep)

Blonde Ronnie James Dio and a girl in a very uncomfortable looking bikini are fooling around in the water after dark and become shark snacks.  Dio survives and tells Officer Patrick Duffy, who has a killer theme song.  Duffy then goes to see Billy who is sitting alone looking at slides of sharks.

Duffy proceeds to ask Billy, "What do we know about sharks?"
Billy replies, "They have a mouth full of butcher knives and all they do is swim, eat and make baby sharks."  Now, I'm not a marine biologist, but I think there might be a bit more to the biology of sharks.

The mayor sides with the capitalist pig and Duffy proceeds to try to set up a net system so that no one else dies.  Shockingly, the weird rubber shark manages to eat through the netting and put everyone in peril.

Hulk Hogan wears some sweat shorts that he tucks into a creamsicle-colored t-shirt into.

It takes a bit to finally get the shark being awesome, but it gets there, and when it does it is totally worth the wait.  It dominates a dock, blows up a boat, and ravages some carnival decorations.

And, then...  Bruno Mattei's absolute madness comes forward:
Apparently the capitalist guy is actually a member of the mafia or something, and he hires a bunch of dudes to kill the shark.  In the discussion about how to kill it, Hulk Hogan posts a very accurate drawing of a shark that was most likely drawn by a 12 year old.  A group of un-trained bullies head out to avenge the damage that Cruel Jaws inflicted on them to a Star Wars rip-off theme song, and then... blow up.

Did I mention that Hulk Hogan trained his dolphins to fight sharks?  Or, that the Navy bred this particular shark to be the perfect killing machine?

This movie is great.  It's ridiculous and extremely entertaining.  The acting is over the top and the shark effects are hilarious.