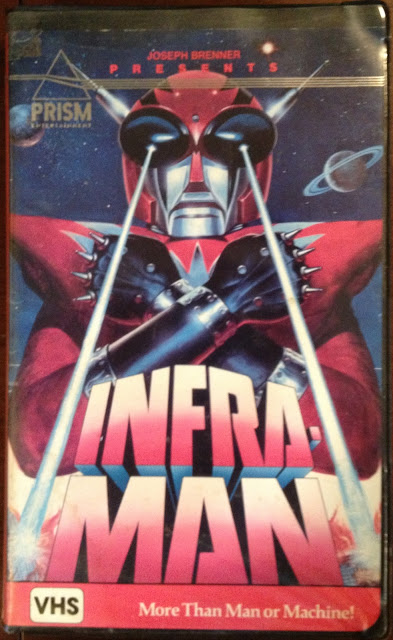 "More than Man or Machine!"  "The Bionic Sci-Fi Adventure!"

The Shaw Brothers are best known for their outstanding kung-fu films of the '60s and '70s (Eight Diagram Pole Fighter is the freakin' sweetest.)  They also had a few forays into science fiction / fantasy.  What we get with Infra-Man is an awesome superhero Kung-Fu Kaiju amalgam.

Infra-Man suffers no fools. He does mega giant flips a lot.  He pushes monsters down.  He spin-kicks and power-slams.  He is the most ultimate Ultraman rip-off ever.

The awesomeness of Godzilla caused Kaiju-mania.  Japan made literally hundreds of Kaiju movies.  And, they made money.  Lots of money.  In the next few decades almost every country that makes films was trying to cash in on sweet monster movies (much to the delight of me).  England put out Gorgo (super sweet), Italy had Caltiki - The Immortal Monster, etc...  China responded with Super InfraMan.

Being as how the edition I picked up is the Americanized Joseph Brenner edition, that's the one I will be reviewing.  I am not sure how much the original version varies, as I haven't seen it.  Sounds like the main villain's name is Demon Princess Elzebub, but in this version it's Princess Dragon Mom, which is better.

Princess Dragon Mom is pretty weird and wants to enslave the earth.  (seems fair)  She attempts to accomplish this by waking up crazy giant monsters that have been sleeping since the ice age.

Awesome goatee scientist (character name: Professor) responds by saying, "I need a computer printout of the princess.  It's important we learn all that we can about her."

After much scientific debate (a 5 min conversation between goatee scientist and astronaut Raymar), goatee decides its time to invent Infra-Man, who is considered invincible.  Raymar quickly volunteers to be the test subject.  "To you nothing will be an impossibility!"

Princess Dragon Mom summons She-Demon, in weird pointy metal bra, to send some cool muppet demons to destroy all of the earthling's satellite equipment, which they do in magnificent style.  However, Infra-Man flips a bunch and then flies to the satellite array, where they battle in traditional kung-fu.  It's the sweetest ever.  Infra-man throws exploding throwing stars and stuff.

She-demon uses her pale-man(esque) eye-hands to brainwash a sleep-deprived scientist.

That's well, pretty much it.


The Evaluation:
Incredible.  Seriously, I love this movie.  I watch a lot of crap in order to find stuff I really want to share, and it was such a treat to find this little treasure at a tiny place in Pepin, Wisconsin called Waste Not Resale.

I am a giant sucker for kung-fu, dudes in big rubber suits, Shaw Brothers, miniatures, incomprehensible film-making, crazy dubbed voice-overs, and monsters.  This movie has it all.  The monster effects are either impressive or the worst ever, depending on the monster, but always awesome.

The plot is recycled from Ultraman and would later be used again and again in the likes of The Mighty Morphin' Power Rangers.  However, that doesn't diminish how genuinely fun this movie is.  The fighting is really fun, and they use the typical Shaw Brothers sound effects.  Princess Dragon Mom does a great job screaming a lot, and the costumes are nothing but elaborate.

Watch this.  You won't regret it.


The Goods:
Well, the VHS is pretty stellar.  Looks like there's also a pretty cheap DVD floating around as well.