Review: ROOKIE OF THE YEAR 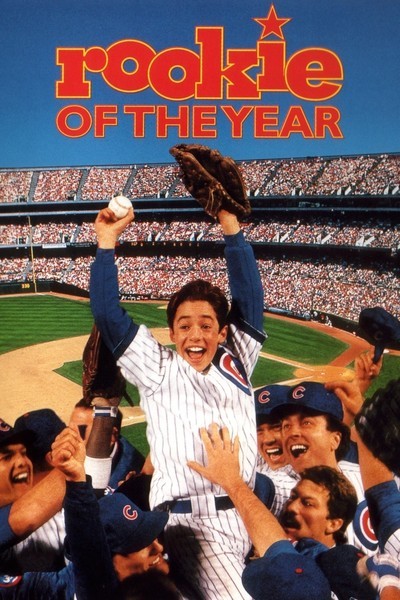 When I was in Fourth grade, I got Mono. Mono so bad,  local medical experts didn't know what the hell was wrong with me. My lymph nodes were the size of clementines. I missed 68 days of school that year. If it weren't for the efforts of my uncle (an unemployed teacher at the time) I would have repeated the fourth grade.

I spent any time awake in front of the TV. One glorious day, while watching reruns of Press Your Luck, my Mom asked if I wanted to get a pay-per-view movie. I called the pay-per-view telephone number and pressed '3' for Rookie of the Year. The Scientific Atlanta flashed and told me to tune into channel 13. I loaded the VCR, pressed record. Over the coming months, I watched Rookie of the Year at least 50 times. 1994 was a year of Rookie of the Year, Fresh Prince of Bel-Air, NBA Jam, and Houston Rockets playoff games.

If you haven't seen the movie. This clip sums it up well:

Henry Rowengartner is your average kid. He has trouble talking to girls. He has unattainable dreams. He lives in a single parent home and life is pretty boring. School sucks. Trying to talk to hot babes is impossible. Baseball rules. . . but Henry is really bad at it. Henry embarrasses himself a his little league game by throwing a grounded pop fly over the outfield fence. To redeem himself, Henry attempts a super hero catch after school one day. He slips on a stray ball, flies in the air for 30 seconds and mega slo-mo breaks his arm.

Henry's tendon (I thought he just broke his arm?) heals too tightly and now he can throw the heat. His fastball could dominate Nolan Ryan's. Henry ends up as a 12 year old big leaguer and brings the Cubs to Worlds Series.

Along the way, a lot of semi-real human drama takes place. Henry's mother Mary is dating a walking midlife crisis named Jack Bradfield. He's super greasy. The "silk shirts and Mazda Miata" type of greasy. Jack brokers a deal with Cubs management and gets Henry a contract with the Cubs. Fish (Dan Hedeya. The evil Dictator from Commando) is the manager that brokers the deal to bring massive publicity to the fledgling Cubs organization.

Along with this, Henry and his friends Clark (the crusty kid from Mr. Nanny and Don't Tell Mom the Babysitter's Dead) and George start having problems when Henry becomes super famous. The plot and sub stories are there only to provide a backbone for the premise. Kids like to see themselves in fantasy situations, and well I have never been a huge baseball fan, I've always loved basketball, and this movie made me wonder if I broke my legs if I could jump really high and slam dunk on David Robinson.

There is plenty of comic relief while all of the more "human" stories are being told. Director Daniel Stern himself plays pitching coach Brickma. He looks like he came right off of a 1970's baseball card. Huge sideburns. Mustache. Glasses. He wears ridiculous suits and has a knack for locking himself in confined spaces.

Rookie of the Year is also one of John Candy's final appearances in a movie. He plays the radio announcer for the team and watching the movie as an adult, he comes off like John Candy. It's easy to forget how masterful his timing was after all these years after his death. He takes a throwaway role and ultimately turns it into something memorable.

While I don't want to come off like a dirty old bastard, but they really don't make kids movies like this anymore. This is a family movie. It's a movie that anyone can watch and enjoy. It's easy to digest and most americans could likely relate in some one to one of the many characters in the film. Sports, Baseball, Friendship, feeling alienated, Gary Busey, this movie truly has all of the bases covered. In fact, it probably has far too much going on to tell a coherent story, but that doesn't matter. It's a really fun movie and the ten year old me will always love it.