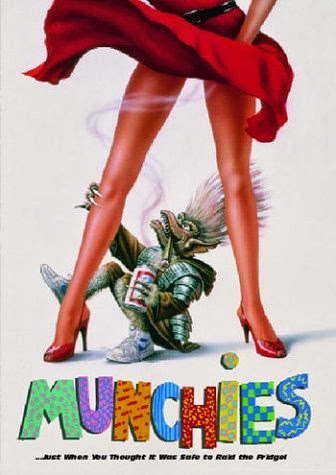 I’m a big fan of Roger Corman. I’ll watch anything with his name on it and there is a 90% chance I will enjoy the hell out of it. Little did I realize, I’ve been a big fan of his since I was a kid. One of my favorite movies when I was young was a little known flick from 1987 produced by Corman called Munchies.

This flick is essentially a Gremlins clone that just so happened to be directed by the editor of Gremlins. I know, kinda weird. As a kid I always thought the box was pretty cool looking. It had that fresh late 80’s vibe to it with all of it’s “hot” colors and its checkerboard lettering. The main image is of a gremlin type creature drinking a Budweiser, smoking what could be blunt (probably just a cigar though), wearing sneakers and looking up at a chick’s snatch. I mean if that doesn’t scream family flick I don’t know what does! If I had never seen this movie as a child and I stumbled upon this VHS on a clearance rack there would be no way in hell I would not buy this for just the cover alone.

So the movie itself is super basic. A wannabe comedian named Paul, who looks like he’s in his late twenties early thirties is in South America with his crackpot, alien conspiracy loving father (played by the lovable Harvey Korman)  looking for signs of aliens in a hidden temple. What they find is a tiny creature who likes chocolate and getting kidnapped. They bring him back home to a cast of crazy characters. The main antagonist of the movie is the toupee wearing, asshole  twin brother of Paul’s father. He’s joined by his bimbo girlfriend and their adopted Grateful Dead-head son. There’s also the Sheriff and his doofus son/deputy. Well, I don’t want to bore you with the over-complicated details but the follically-challenged twin brother hates his alien loving brother so he and his step son kidnap the adorable “munchie” named Arnold. After Arnold scratches up one of the dead-head’s favorite Grateful Dead records he goes on a rampage and Arnold meets the sharp end of a knife. He gets sliced up into four pieces and just like in Gremlins those pieces grow into junk food loving, beer drinking, pot smoking hooligans. They murder the dead-head step son by cranking up the volume on the stereo until presumably his brain melts in his skull (although this is unfortunately not shown). So it is up to Paul and his girlfriend to capture all the munchies (every time you cut them in half they multiply so by the end there are a bunch of them) and somehow stop the evil twin brother and his bimbo girlfriend from wrecking the town with toxic waste (‘cause it wouldn’t be an ‘80s movie without toxic waste!).

There are a couple of scenes that I vividly remember as a child. There’s this scene where Paul and his girlfriend start fooling around and when I was a kid I thought, “Man, that looks AWESOME!” Now, it’s rated PG so there weren’t any sort of titties in this movie. In the scene, they are lying in bed, about to bang, when Paul’s girlfriend says that she wants him to check her reflexes. He proceeds to pull out a giant balloon hammer and hits her in the knee and they laugh and pull the sheets over them. A few minutes later they are playing Marco Polo under the sheets when Paul pops up with a hand crank whisk, says something “funny”, and goes back under. Was this what sex was like? Am I supposed to have a chest full of props in order to bang chicks when I grow up? Is sex the equivalent of going to a Gallagher show, only there is a chance of getting someone pregnant? These are the questions that came to my 6 year old mind. 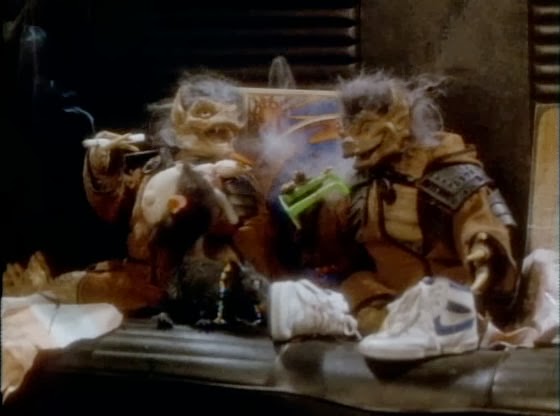 The other scene that stuck with me was when the munchies get loose and make their way to an ice cream shop. They attack the family that works there and one of them bites the father in the neck. Fun fact: the father at the ice cream shop just so happens to be Star Trek Voyager actor Robert Picard! I remember the family wore big upside down ice cream cones for hats. That always stuck out to me for some reason. Years later watching the series premiere of Star Trek Voyager Robert Picard walks onto the TV screen and I think out loud “That’s the ice cream cone dad from Munchies!” My mother had no clue what I was talking about.

After watching it again the other day I feel like Munchies still holds up. The Munchies all have crazy voices that sound like Cheech Marin and Peppe Lepew and it’s all pretty fun. There is a great scene involving an old lady, fireworks and a car chase and another involving a mini golf park. Plus, on top of it all, a Paul Bartel cameo at the end! It’s dumb, goofy and completely childish and you know what? To me it’s still a fun kid’s movie.
P.S. I wish Roger Corman was my Grandpa...

Set yourself up: Grab the biggest bag of Cheddar & Sour Cream Ruffles the grocery store has, load up on a 24 pack of Budweiser (you know, the King of Beers) and maybe even partake in some illegal activities (unless you’re in Colorado or Washington, then you’re cool).