Rant: IT SUCKS TO BE A KID

As we embark on a month of movies that messed us up as kids, movies meant for kids that are crazy disturbing, and just plain movies we remember helping shape us, I started to think about my own childhood.

Being a kid sucks.  You're small and have no income, and your limbs are weirdly gangly and awkward.  You fall down a lot, get gravel in your hands, and have to go to bed early.  School is a drag, and bullies abound.  Other kids (including you) suck, and that's who you interact with most of the time.  You have all these dumb rules you have to follow and you are always in the process of being socialized, because you are basically a wild animal birthed from the loins of a citizen of human society.  And, if all that weren't bad enough, you feel as though your parents don't understand or trust you, which got me thinking about Tobe Hooper's 1986 remake of INVADERS FROM MARS. 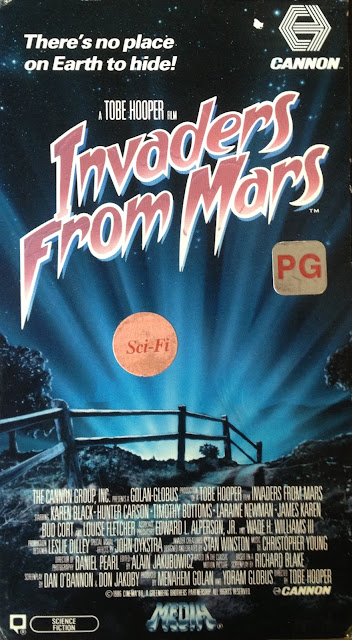 I've never seen the original film (yes, what blasphemy, be up in arms about it please).  This one is disturbing enough for me, thank you.  I was watching it a few nights ago, and I didn't realize I had actually seen this movie as a kid until I was about 45 minutes into it.  There is an image that is seared into my brain of a teacher leaned over a sink as a young boy walks into his science classroom.  The teacher turns around to reveal she has a frog hanging out of her mouth!

This image is terrifying enough as an adult, but as a kid, I remember it freaking me out.  I'm not sure what context I saw the film in, but images became more and more familiar as it went on.  Perhaps on TV...?

Anyway, what struck me as an adult is the idea that no parents ever believe kids in movies.  There is a secret kid world where fantasy is reality, and parents never have the imagination to accept this until it's too late.  In the case of Invaders, they become terrorists controlled by the Martians.  But, in general, I can think of about ten movies off the top of my head where parents don't believe their kids.  Often, it comes to the detriment of those untrusting old jerks who have no imagination, ie: The Stuff. 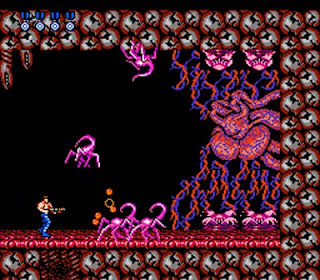 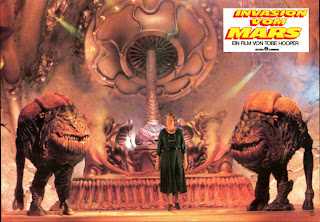 But, back to Invaders.  Where The Stuff is truly about the dangers of capitalism, Invaders seems to be about CONTRA.  You know, that sweet NES game where two marines go off killing an alien invasion.

Whereas Contra was made in 1987 (the year after Invaders was released) it seems to me the plot is a bit cooler than that of Invaders.  Actually, I don't understand the plot to Contra, but after you beat it, it reads,
"CONGRATULATIONS!  YOU'VE DESTROYED THE VILE RED FALCON AND SAVED THE UNIVERSE.  CONSIDER YOURSELF A HERO."
That's pretty rad, if you ask me.  Both involve Marines going down into the alien lair and burning them out with flamethrowers and rocket launchers.  Both involve my childhood.  And, in a weird way, have influenced how I view childhood.


David, the protagonist of Invaders, hunts down the marines to get help fighting the aliens, but also believes it might work to just talk to the aliens to convince them to leave.  The general responds with, "Marines have no qualms killing Martians!"

David tries anyway, but in the end the Martians don't care for talk and it's the Marines that get the job done.  And, it seems to me only a child solves all problems that way...