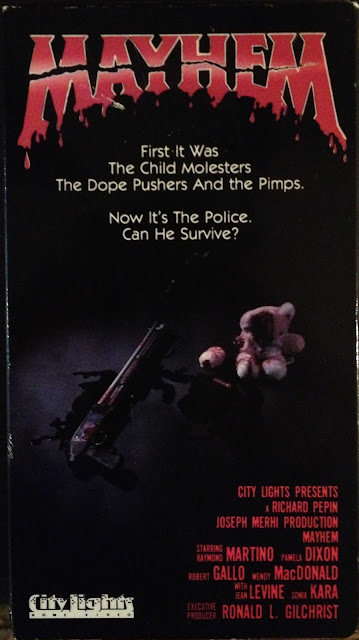 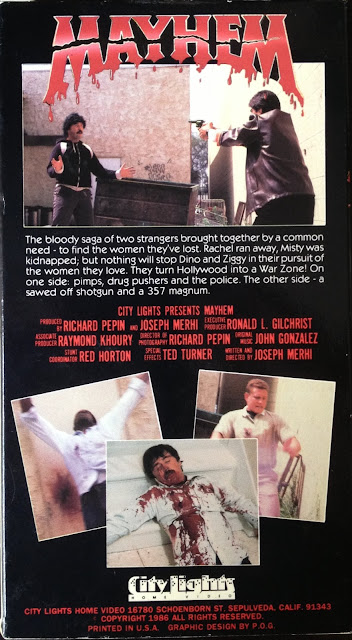 Collecting physical media is a quickly dying hobby.  Digital media is becoming more overwhelming and prevalent.  Streaming services offer a seemingly unlimited amount of titles.  However, the titles on Netflix and others are pushed at you based on their restriction rights with the hopes of gaining the most profit.  Likewise, the temporary nature and inferior quality of that digital content offers no sense of ownership.  However, not all physical media is better than the box it comes in, ie: MAYHEM

So, this started as a regular review, but as I was writing I realized I dont care near enough about this movie to actually write a review.  Sure, it's enjoyable enough, and I'm happy with the time I spent on Mayhem, but I need not spend any more.

Joseph Merhi was a straight to video producer for most of his career.  He has become synonymous (at least in my mind) with goofy action sequences, overly bloody violence and awkward Cinemax-like sex scenes.  His production company (PM Entertainment as in Peppin-Merhi), released such gems as Rage and Skyscraper.

Mayhem is Merhi's directiorial debut.  And, though it is a first film, it is wildly successful at being a Merhi vehicle.  The acting is superbly terrible (when I first saw David Prior's Night Wars, I wished that I could watch an entire movie starring the car salesman.  Well, the lead in this, Raymond Martino, is about as close as it gets.)  The character development is insane.  For instance, Dino yells at his cat like a jealous husband, and then it cuts to his real wife as the cat.  He only eats healthy and gets down on his friend Zigi for eating hamburngers.  However, he also kills without hesitation. Anyway...

I was with my friends Nick and Meghan Geiken in Sioux Falls a few weeks back.  We were hunting around Family Thrift Store and brought up a few tapes to fhe counter.  The clerk asked us if we'd like to see the back room.  Without hesitation, I said of course, and my heart began racing.  In a garage in the back, Nick and I climbed atop boxes, lawn mowers and more to find a wonderful treasure trove of tapes.  We were told we had 15 minutes, so we began tossing anything somewhat interesting into a box.  Hence: my acquiring Mayhem.

The box art was interesting enough for me to snag it.  What really caught my attention, however, was that PM logo and that amazing tag line... and THE BACK.  The back is incredible.  First, the tagline.

"First it was the child molestors, the Dope Pushers and the Pimps.  Now it's the Police.  Can he survive?"

Without having an annoying discussion of the grammar and semantics there, I just want to point out how funny I find that list of villains.  It's also pretty misleading, but I need not go into that.

And, we get to the back of the box.  First, a dude in a hilarious wig and mustache getting gunned down.  Alright, you've got me interested. A man in a white button-down shirt throwing himself backward while being shot next to dude full of blood, and Buzz from Home Alone next to that, yelling.  Sold.   Oh, and if you notice the dude who did Special Effects...