When you’re a kid, you’re never the right size. All of the awesome things that grownups get to do (driving cars, sliding down fire station poles, flying jets, etc…) are off limits, and damn near all of your toys are miniature versions of the same things but you are too small to actually use them. So, you don’t get to fly jets or inhabit that sweet Lego castle you just made, which is a total bummer because the castle has a moat and a dragon. Children’s literature and film has long tapped into this childhood desire to be resized. It’s what made films like Big and Honey, I Shrunk the Kids and books like The Borrower’s  and Roald Dahl’s The Witches so appealing to us as children; they gave us a vicarious glimpse into the undersized or oversized worlds we yearned for. The latter of those books was adapted to film in 1990 by British director Nicolas Roeg, better known for his trippy scifi film The Man Who Fell to Earth as well as the films Eureka and Walkabout. And though I watched Roeg’s The Witches dozens of times as a child, it wasn’t until I revisited it as an adult that I realized just how damned creepy it is.

To be fair, a lot of that creepiness comes straight from the source material. Dahl’s writing nearly always treaded a careful line between macabre and delightful fantasies. Most, if not all, of the inciting incidents in other size change stories are light hearted cosmic mishaps or silly science gone awry. Dahl’s is the only one that comes to my mind where this morphing is decidedly malicious in intent. Immediately after the film’s odd opening credits (sped up aerial photography of snowy mountain tops? Thank you early 90’s), it dives right into the frightening material with the protagonist Luke’s grandmother Helga telling him about a worldwide conspiracy of evil, child murdering witches. “But witches don’t murder children with knives or guns; that’s for people who get caught. And witches...never get caught”, she tells him while sharing the story of her childhood friend who was killed by a witch. Erica, the friend in question, was kidnapped by a witch and placed by a spell into a painting that hung in her parents’ house. If that wasn’t batshit crazy enough, Helga goes on to state that Erica aged within the painting, becoming an old woman who eventually just disappeared. Helga further lists a number of disturbing facts about witches, their habits, why they dislike children, and how to discern a witch from an ordinary woman. 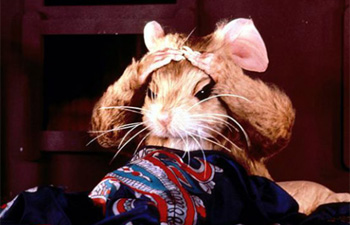 After the opening salvo of violent, frightful tales of the witches and their schemes, the story skips into the standard children’s story cliche by killing off Luke’s parents in an unseen car accident. After a unsettlingly brief mourning period, we learn that Luke and Grandma Helga have moved to England. A creepy witch tries to seduce Luke out of his treehouse by offering him a snake, Helga passes out due to an illness (pneumonia in the book, and for some reason “a mild case of diabetes” in the film), and the two decide to heed the doctor’s orders by retiring to an ocean-side hotel. Well, it just so happens that the Grand High Witch (played deliciously evil by Angelica Huston) and every other witch in England have descended upon the same hotel for a sort of witch sales conference. I should mention at this point that Rowan Atkinson (aka Mr. Bean) plays the hotel manager, a nice little addition to the film’s comedic sections. While exploring the large hotel, Luke is forced into hiding in the conference room where the witches (whom he’s recognized from Helga’s earlier descriptions) are having their meeting. Luke learns that their plot is to put a potion into candy that turns people into mice, buy up every candy store in England, and give away free, potion-laced candy to every child as a “Grand Opening” event. The potion is readily demonstrated by the cliched fat-kid-who-always-talks-about-food character Bruno, lured by a promise of free chocolate. Bruno promptly turns into a mouse in a really freaky and brilliant bit of special effects and Jim Hensen puppetry. Luke eventually gets found and turned into a mouse as well. The combination of Hensen’s puppets and live mice is really incredible throughout the film and holds up better than most modern CGI does.

Roeg seems very aware of the childhood size-change fantasy I described earlier, because Luke and Bruno are rather unfazed by their sudden rodenthood. In fact, Luke immediately starts consoling Helga when she finds out about it. It’s really striking when watching this as an adult how quickly everyone adjusts to the situation, but the more I thought about it, the more I realized the genius of it. When I watched this film as a child, my brain didn’t latch onto the creepy first half of the film, instead it hung onto the fun idea of being a mouse running around a large hotel. By the end of the film, Luke has built himself an impressive tram system out of Legos and other toys on which he can ride to different parts of the house and he sleeps in the Ghostbusters Firehouse Playset. What child would choose the life of a school kid over the life of a mouse with a seemingly endless supply of killer toys that they can actually fit inside? All that stuff about creepy witches and child murder is completely irrelevant the moment you tell a child that they can live inside their toy hideout of choice. I think Roeg’s insight here is pretty brilliant. Luke shouldn’t care about getting turned into a mouse because to a kid, turning into a mouse is a major upgrade of their place in life.

*One last creepy thing that I hadn’t noticed until I was rewatching the film in preparation for this review: a doll face randomly stapled to the wall above the hotel room bed (screenshot below). What the hell, Nicolas Roeg, what the freaking hell? 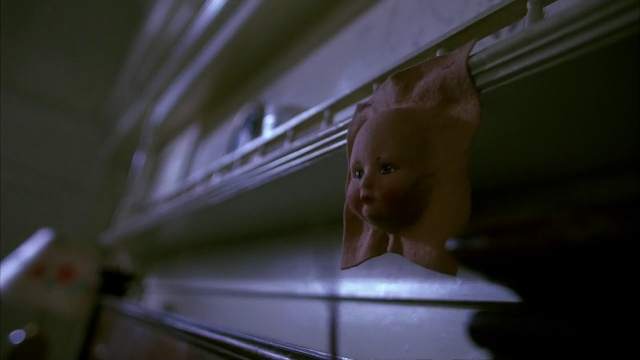 Growing up I watched this on VHS. When I rewatched it for the review I just downloaded it. It's available on disc from Netflix or just on DVD, or as a paid streaming rental from Amazon. I saw the DVD version years ago and don't remember there being any problems with the transfer. It's British, so it has that look to it due to formatting.
As far as food, I would recommend your favorite cheese or cheese substitute, as well as tea and crumpets. Chocolate would be good as well, preferably with some sort filling to simulate the potion. Finally, in honor of Bruno, you should make sure to constantly complain about how little food there is and/or ask where you can get more.

- Ryan Nichols
Ryan is a writer, film-maker, lover of the crazy, and regular contributor to crocaduck.com