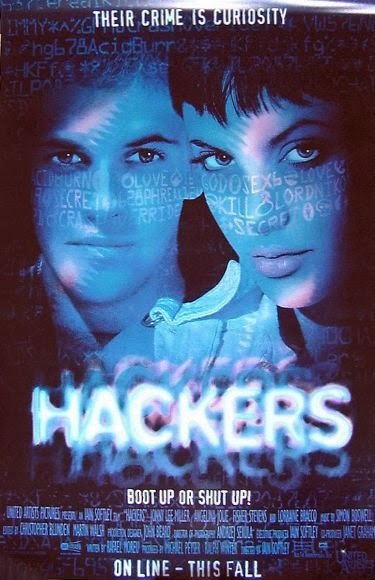 11-year-old Dade "Zero Cool" Murphy hacked and crashed One Thousand Five Hundred Seven computer systems in one night. One of the affected systems was Wall Street and it caused the stock market to drop 7 points one day. Zero Cool got busted big time. He was arrested, fined, and banned from owning or operating any computer or touch tone phone until his 18th birthday.

The main story line starts when Dade's mom gets a new job in New York. Dade and his mom relocate days before he turns 18 and starts his senior year at a new school. Crash isn’t too happy about the move but is stoked to use his computer again. He picks a new nickname/internet handle, Crash Override. Crash starts his new school and meets punk rock Angelina Jolie, Kate. Kate, played by Angelina Jolie, is a real bad azz with short hair, futuristic punk rock clothes, and an attitude that says "Fush you, I'm a Badass, and I love to hack into mainframe computer network hardrive rams and totally mess their shit up, man."
Her hacker name is Acid Burn. HA! As the story usually goes, Crash Override wants to totally make out with Acid Burn really hard but Acid Burn likes to play hard to get.

Crash settles in with a crew of tech punk nerds at school who invite him out to their favorite hangout establishment. The hangout joint is radical. Imagine a place that has the virtual reality games from the mall in Sinbad's "First Kid", the look and feel of Max's hideout from Shaq's "Kazaam", and Preston's crazy-overboard TV wall from "Blank Check." Now imagine that the place is filled with people that dress like techy versions of Rufio from "Hook" and Biff Tannen's son Griff from "Back to the Future Part 2." Yeah..... it is pretty cool spot.

Crash's new group of friends consists of "The Phantom Phreak"- a flamboyant hipster hacker with threads from the year 3000. "Cereal Killer" - a tall hyper hippy with a passion for video games, junk food, and I’m guessing psychedelic drugs. "Nikon" - the cool black dude with all the smarts, style, and friends. And last but not least there's Joey. All of the characters have sweet nicknames and style but Joey is just Joey. Mediocre. He wears bib-overalls, a backwards hat, and smokes cigarettes. He is new to the hacking game and tries to impress the veterans with attempting all sorts of hackings and such.

During one attempt to prove he's totes legit at hacking, Joey accidentally hacks into Ellingson Mineral Company's super computer, The Gibson. Joey found his way in to the garbage file and then downloaded some of the file to a floppy disk.

The head guy in charge of security for the Gibson Super Computer tracked Joey before he got out of the system. This head security guy is a greasy dude that prefers to be called "The Plague." The Plague is an evil super genius who writes the worst computer virus ever, the DaVinci Code. The DaVinci Code is a virus designed to mess up big ships that haul oil across the ocean. After sinking one ship and creating a huge oil spill in the ocean, The Plague writes a fake ransom note in order to make a crap ton of money and blame it all on Joey. 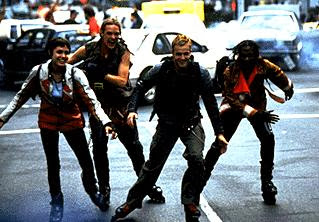 Joey's totally screwed because United States Secret Service Agent Richard Gill is in charge of some internet crimes division and hates hackers. The crew gets together to help Joey out. They find his hidden floppy drive but do not know what it contains. To buy time Crash and Acid start a dueling competition harassing Agent Gill via internet pranks. They cancel his credit cards, mess with his bank account information, and some how legally change Agent Gills life status to deceased.

The hackers buy enough time to figure that the floppy drive contains proof that The Plague is the evil butthead that wrote the DaVinci Virus and is ruining Joey's life. It's down to the wire now. The crew is catching heat from Agent Gill because the computer virus is scheduled to screw up another oil ship. Hackers unite all over to overload the internet waves with hackings, main frame overloads, and virus to help the crew with their one last attempt at clearing Joey's name. With the secret service and a greasy evil maniac breathing down their necks, the friends hack into the Gibson Super computer to stop another ship from capsizing and spilling oil into the sea. They succeed but get arrested anyway. Luckily Cereal Killer had the munchies and ran to the g-station to grab a hunny bun. He totally elludes arrest, got the floppy disk proof, and with the help of a couple pill popping party nerds, broadcasts the information on ALL CHANNELS. The crew is cleared and the plague gets locked up.

Hackers ends with Crash Override and Acid Burn go on a date and Angelina Jolie wears a dress.

When I was 5 years old I wanted to be Colt from "Three Ninjas" and fight anyone who dare threaten my imaginary friends. When I was 8 I wanted to be Dan Marino or some other form of stunning NFL quarter back. When I turned 11 I saw Disney's made for TV Movie "Brink" and wanted to become a Soul Skater. At 12 years old, "Hackers" was the coolest movie I had ever seen. At that time in my life I loved rollerblading (aggressive in-line skating), video games, and the thought of being older and super dope at things. Hackers had everything I wanted in real life. The characters had sweet nicknames, they rollerbladed to crazy video game clubs, and rebelled against authority figures that didn't understand what it was like to be different. The movie also showed Angelina Jolie’s boob, so I assume I liked it for more than just the extreme sports and video games.

The exaggerated fashion styles and over the top dialogue is hilarious. Every scene seems to be filled with some ridiculous version of a fad we can all relate to. Like looking back and remembering how much LA Looks Extra Firm Hold Gel I pumped into my hair on a daily basis… Or when JNCO jeans and Lee Pipes were all the rage… Or when moon shoes, old navy tech vests, or giga pets were necessary items to own.

You can tell that the writers really had no idea how computers, security software, or even touch tone phones really worked though. It seems that majority of the budget was spent on wardrobe and neon lights not on researching real computer facts.

In a way this movie mirrored exactly what a lot of our childhoods were like. We spent any money we had, and or any money our parents would supply us with, on things that looked cool, were in style, and had no real sustenance. From the dialog to the wardrobe to the plot of the movie, our biggest goal was to look awesome and impress the people in whichever click we wanted to be a part of.

Hackers also touches on the idea that being connected via the interwebs creates an even playing field for everyone. It seems to me that the creators were not aware that this statement was being made. Regardless of intention, hackers shows that whatever you’re into, there is someone else out there that loves the same stuff. The change in social groups and our accessibility to like minded people has projected fads and styles bigger then they have ever been. At the same time this change has magnified the genres that did not attract much attention before. Musicians have a bigger web of people they can share their music with, movie junkies can access and discuss films that may not have been possible to find, and writers can publish their work on websites and blogs. The list goes on….

All-in-all Hackers rocks! It’s fun, fast, and rewarding. It makes you feel like your 12-years-old again. My suggestion for watching this movie would be:
1. Get a couple buddies together.
2. Order a giant pepperoni pizza.
3. Buy a cube of mountain dew.
4. Play a riveting game of POG, bring your best slammer.
5. Then get out the 10 gallon barrel of cheese balls and hit play. (CAUTION! Laughing this hard may cause jaw pain and tightening of stomach muscles.)

- Nick Geiken
Geiken is a killer sweet dude who keeps an office furniture place running, loves kids movies, westerns and soccer.  He is also a long term friend of the site.