Sometimes movies aren’t as awesome as the box art and description they present.  Today, I offer Dario Argento's TRAUMA. 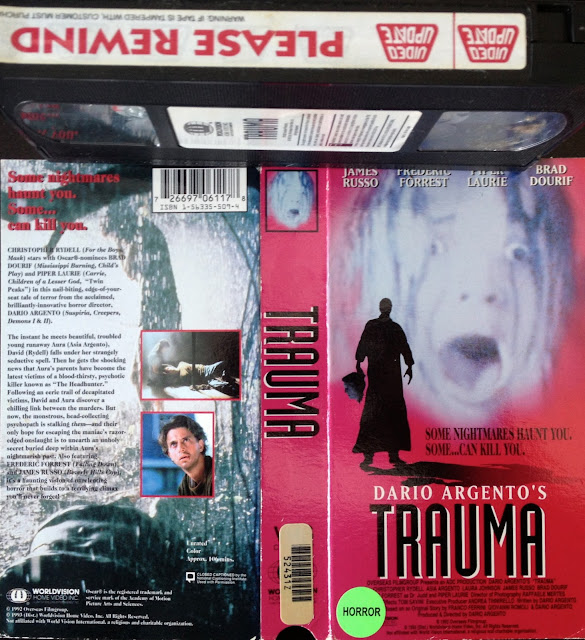 The Tagline:
SOME NIGHTMARES HAUNT YOU, SOME... CAN KILL YOU.

The instant he meets beautiful, troubled young runaway Aura (Asia Argento), David (Rydell) falls under her strangely seductive spell.  Then he gets the shocking news that Aura's parents have become the latest victims of a blood-thirsty, psychotic killer knows as "The Headhunter."  Following an eerie trail of decapitated victims, David and Aura discover a chilling link between the murders.  But, now, the monstrous, head-collecting psychopath is stalking them - and their only hope for escaping the maniac's razor-edged onslaught is to unearth an unholy secret buried deep within Aura's nightmarish past.  Also featuring Frederic Forrest (Falling Down) and James Russo (Beverly Hills Cop), it's a haunting vision of unrelenting horror that builds to a terrifying climax you'll never forget!"

The Box:
It's alright.  The big green HORROR sticker and the name DARIO ARGENTO will make me purchase just about any box.  There is a goofy circular somewhat unrecognizable Asia Argento face next to a weirdly tall silhouette of a dude holding the decapitated head of another dude.  The back of the box is pretty unremarkable.  There's some rain, a hacked out creep looking confused and, presumably, that same hacked out creep being cradled by Asia Argento.

The Evaluation:
There are a number of things that should've tipped me off to lower my expectations.  The boring art on the back.  The tagline that ends with a period instead of an exclamation point.  (If a nightmare can kill you, you should be excited.  - Also this tagline is very misleading.  This is not Nightmare on Elm Street territory).  Brad Dourif is not the lead.  That's really too bad, because that dude is the sweetest.

About ten minutes into the film I recognized the stone arch bridge, realized it was shot in Minneapolis, and got excited.  But, I was soon bored, as not much happened.  Yes, there are beheadings. That's cool.  But, it's really too bad the giallo maestro couldn't have shot something sweeter here.  Imagine if it was Opera?  (PS - If you haven't seen Opera, watch it ASAP)

In the end, I would say you could skip this one.  Start with Deep Red, then move on to Opera, Suspiria, and Phenomenon.

PS - Demons & Demons II is misleading.  He only produced those.  They are directed by Lamberto Bava.  But, they are pretty sweet, so...