This Monday I submit for your approval the box art for LIFEPOD. I picked this up at my favorite little video store on Chicago and 46th in Minneapolis. The art itself is a little dull, but the description sucked me in. 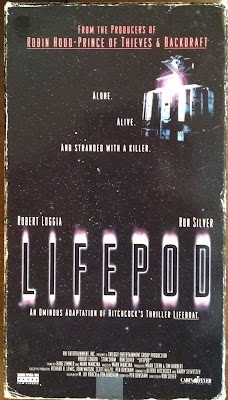 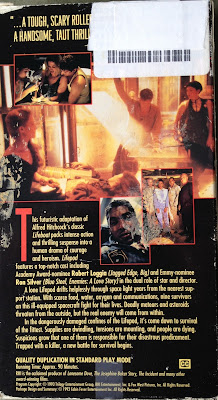 "An ominous adaptation of Hitchcock's thriller LIFEBOAT."
"This futuristic adaptation Alfred Hitchcock's classic Lifeboat packs intense action and thrilling suspense into a human drama of courage and heroism.  Lifepod features a top-notch cast including Academy Award-nominee Robert Loggia (Jagged Edge, Big) and Emmy-nominee Ron Silver (Blue Steel, Enemies: A Love Story) in the dual role of star and director.
A lone Lifepod drifts helplessly through space light years from the nearest support station.  With scarce food, water, oxygen and communications, nine survivors on this ill-equipped spacecraft fight for their lives.  Deadly meteors and asteroids threaten from the outside, but the real enemy will come from within.
In the dangerously damaged confines of the Lifepod, it's come down to survival of the fittest.  Supplies are dwindling, tensions are mounting, and people are dying.  Suspicions grow that one of them is responsible for their disastrous predicament.  Trapped with a killer, a new battle for survival begins."
Sounds good, right?  I like Lifeboat and I like movies in space.  Ron Silver is kind of creepy.  Robert Loggia is pretty old and I think was in Rookie of the Year?  That movie is sweet.
Yes, the art is pretty boring.  That being said, I never would've bought this tape if it had this art: 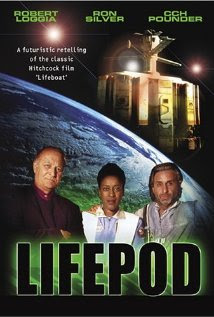 The movie itself is a little slow and the characters really aren't that engaging.  It's enjoyable enough as an exercise in remaking films in a more interesting way, but in the long run, you're better off watching Event Horizon (horror remake of Solaris).  Or, better yet, just watch Solaris.
-J. Moret
Posted by All-Star Video at 10:26 AM