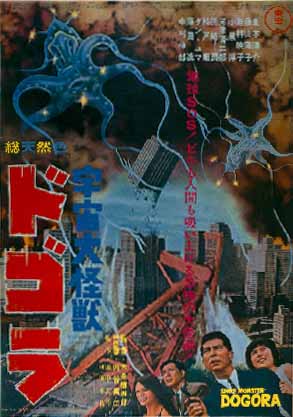 "S.O.S. From Space!  It Devours Buildings and People!"

In the 1950s, 60s and 70s, Toho put out dozens of giant monster films.  However, this isn't your typical Kaiju film.  It has all the trappings of a great monster film, but no dude in a big rubber suit destroying cities.  Fear not, it still has it's defining moments based on great special effects and miniatures.

As I sat down to watch this again, I asked myself why do I love this movie (and others like it) so much?  And, then, in the first five minutes my answer:  Extremely strange and creative effects, transparent political backdrops, outstanding music, and monsters.  I love monster movies.  When done well they make for tragic commentaries on everything from war to poverty to family dysfunction.  When done poorly, they still have cool looking creatures, destruction, fire, and explosions.  You pretty much can't go wrong.  Unless the Syfy Channel does it.  Then, it's most definitely shite.

THE MONSTER:
Dogora is a mysterious H.P. Lovecraft-esque electric jellyfish from space.

THE PLOT:
Maki the Safecracker is busy cracking a safe to steal some sweet diamonds when he and the others around him start floating.  A glowing, crazy amoeba monster comes in and attaches itself to the door of the safe.  The thieves run away and the monster proceeds to melt the door and steal the diamonds inside.

Scientist Dr. Munakata (Nobuo Nakamura, known from Ikiru, Tokyo Story and tons of other amazing Japanese films) is busy creating fake diamonds when Mark Jackson (Robert Dunham - aka American stand-in for tons of Toho films) sneaks into his house.  Inspector Kommai is there to stop him and Jackson socks him a good one to the stomach.  Kommai gets laid out and then wakes up to Masayo's (Yoko Fujiyama) face.  They obviously fall immediately in love.

In the meantime we discover that Gangster Boss (the actual character name) has a sweet desk radio.  Mark Jackson karate chops some of his henchmen.  Apparently, Mark Jackson is a rival diamond thief.

The mobsters are out to hold up a truck carrying diamonds.  Mark Jackson is on the hunt in an awkward little yellow volkswagon beetle.  They have a pretty sweet shootout, and then a truck carrying coal somehow gets picked up and carried away? We then find out Mark Jackson (I'm just going to keep saying his full name, because it's amazing) is part of a UN delegation to protect diamonds or something.  (?)

The criminals find out the diamonds they got away with from that truck are actually fakes!

At the same time all this is happening, we discover that the mysterious floating people, etc, is caused by a crazy space cell, which they name Dogora.  Dr. Munakata believes that Dogora is after coal and diamonds because they contain especially high levels of carbon.  Coal fields all over the world are getting sucked up by the sweet monster in amazing sequences of color.  Munakata is trying to find a solution and the army is just shooting missiles at Dogora.

Along the way Mark Jackson and Kommai become buddies, have dynamite put in their collared shirts, have a gun / dynamite fight with the mob and eventually become the best of friends.  Dr. Munakata realizes that Dogora fears wasps (yep) and the military begins to create weaponized wasp toxin to fight the space monster.

THE EVALUATION
I love the craziness of Honda's imagination.  It seems to have no bounds.  Here, he combines elements of American Film Noir with his love of monsters.  He never shows Dogora in it's entirety.  Large, menacing tentacles dangerously swing for planes and dislodge bridges, but their master is never seen.


IThe monster's motives are very suspect.  Most of the monsters in the Kaiju pantheon are pretty straightforward.  Godzilla was created by atomic energy and is tragically drawn toward cities.  Biollante was created from cells from Godzilla, and is seeking to be the only giant creature on the planet, etc...  But, so little is known about Dogora, I can't help but feel especially curious.  Is it a lost creature, simply trying to get what it needs to survive?  Is it one of millions that will one day overrun the planet?  Is it the last of a dying race?

The Disc:
The Tokyo Shock DVD is attractive enough, has two English subtitles and both the Japanese and English soundtracks.  Not much for special features, just the trailer, plus previews for Gappa (best trailer ever), Matango, The Mysterians, and Varan the Unbelievable.