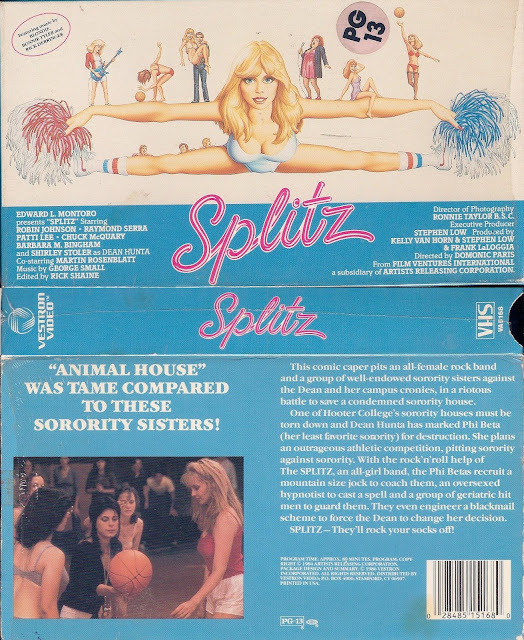 This Monday I submit for your approval the box art for SPLITZ. I picked this up at a thrift store in suburban Philadelphia. I couldn't resist it. This box is quite fetching.

Vestron Video certainly succeeded in creating a visually appealing box. The orientation of the box is obviously It's most unique characteristic. In fact, I'm not aware of any releasing companies that took this approach (though I have a feeling it's been done more than once). I would doubt that many video stores displayed the tape horizontally. That would just take up too much shelf space, but it's very cool regardless.

The colors on the box catch your eye. Electric blue, white, and pink suggest this will be a lighthearted and silly movie. The font SPLITZ is written in suggests that it might get a little sexy. The well endowed blond splitting across the box horizontally makes the tape also supports the sexy theory. It's 80's sexy. The cartoony women on this box most likely got people to rent this video more than the content of the tape itself. That was the key to video store boom of the 1980's: Make the movie look as appealing as possible, even though it may be a turd.

SPLITZ is certainly on the turd end of the spectrum. The synopsis on the back of the box makes the movie sound like it's going to be fun for a night of trashy fun. Sadly, the film itself falls well short of "ANIMAL HOUSE was tame compared to these sorority sisters!" It's more like a broke ass version of REVENGE OF THE NERDS with extremely violent and inaccurate instrument miming during the music scenes. While it's completely watchable, it isn't very exciting and 3/4 of the cast are expendable.

But it is does have something going for it: It's one of those weird PG-13 movies with frontal female nudity. Imagine being 14 in 1984 and going to rent a video. YOU COULD GET A MOVIE WITH NAKED BOOBS IN IT!