Directed by David A. Prior
1990
84 Mins.  Color.
VHS from Action International Pictures 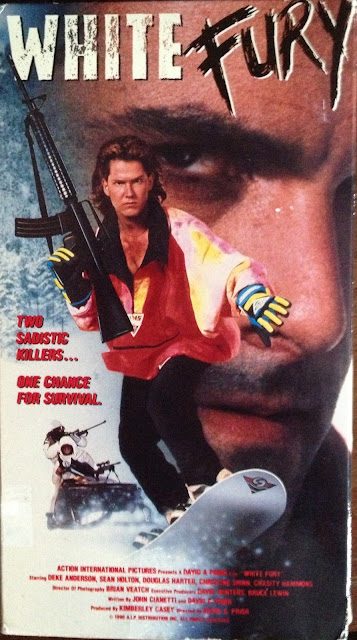 Remember when Snowboarding was new and the X-Games didn't exist?  (Do the X-Games still exist?)  Cool dudes wore neon orange headbands and pink snow pants with sunglasses while doing half-pipes.  George H.W. Bush was president and the Cold War was coming to an end.

Also popular in 1990: bank robberies. Add to that excellent dynamic a weird looking dude with long hair and an M-16 (there are no M-16s), and you get WHITE FURY!

On the Prior continuum, this lies in his middle period.  Let's call it his silver age.  I think everything from Sledgehammer to Rapid Fire is golden.  Unconcerned with legitimacy or stardom, Prior was cranking out extremely low budget excitement at the exhausting pace of three per year.  And, at that pace, it seems that Prior was working completely on instinct. Everything feels fresh, underplanned, and always on the brink of complete disaster.  They are an absolute joy to watch.

Because of the success of those years, he managed to get David Carradine for Future Force and then later Pamela Anderson for Raw Justice.  Those star vehicles do seem to have been successful, but I'm not sure that the price to profit ratio was quite as high as with the no or low-namers that he was working with before.  And, as the video market collapsed, so too would Prior's prolific pace.

But, 1990 was a wild year for Prior. He also released Future Zone, Invasion Force, Final Sanction and Lock N' Load.  The very idea of shooting a movie every two months seems to provide no room for introspection or second-guessing.  This is the very definition of guerilla-filmmaking.

The Rundown:
Danny uses the power of his ponytail and green neon scarf to win a sweet snowboard tournament.  To celebrate, his best friend (Greg), his girlfriend (Christine) and Greg's new girlfriend who wears tiny skirts in the snow (Leslie) go ride snowmobiles out to a weekend at a cabin.  There are some wild antics, such as making out and charades.

Meanwhile, Marcus, Tyler and Marvin rob a bank and then gun down all the patrons inside while laughing.  However, Marvin has decided he wants out afterward.  Marcus and Tyler aren't okay with that and Marvin gets a boot-knife to the spine.

Enter hard-boiled bounty hunter Martin Towers (played by Douglas Harter, better known as Craft Services from pretty much every Prior movie up to this one), who is on the hunt for Tyler and Marcus.  Then exit Towers until later...

Marcus and Tyler happen upon the cabin and are big time creepers.  Luckily, Leslie is a gold-digger and likes the idea of being with a bank robber.  Really creepy kissing scene to commence.  Greg is all bummed out and stuff.  He tries to regain his honor and gets punched in the mouth.

Danny manages to sneak away and hide the money, putting Marcus and Tyler in an awkward situation.   Danny hatches a half-cocked plan, gunfight commences, lacking muzzle flare.  Then we get a snowmobile snowboard mega-chase while Danny miraculously has a giant orange stocking cap (so the stuntman can wear scarf plus hat and be unrecognizable) to a sweet speed metal soundtrack.

This is one of the few times I've heard Prior use metal, and it's great.  I wish he did it a little more.  Generally, he uses less distinct synthesizer music that give a much lighter tone, but I thought this made this scene super fun.  Oh, and the band that plays the sweet metal is called PAPSMEAR.  Yep.  You know that's solid.

This scene has a fantastic payoff that I won't spoil for you.  But, I'll say this, it was totally incredible.  Afterward, Towers and Danny sit down to coffee and have a chat, man to man.  There's more, but I'll stop there so you can see it for yourself.

The Evaluation:
Definitely one of the most enjoyable of Prior's later career.  The self-contained story, speed metal, brilliant acting by Tyler (Deke Anderson) and the character of Martin Towers made this super enjoyable.  Not sure why this doesn't get more play, it gives you exactly what you want. Crap like Aspen Extreme (a personal childhood favorite, but totally sucks), and Hot Dog are on best of lists for skiing / snowboarding, but no White Fury?

There are so many reasons to like this film.  It is absolutely forgettable, but I think that is its purpose.

The Goods:
You get a trailer for a swimsuit movie (is that a genre I didn't know about?) aptly called Swimsuit.
And a trailer for outstanding looking, Soultaker starring Joe Estevez. - this line is in the trailer: "Led Zeppelin was wrong man, there is no stairway to heaven."  Absolutely Goddamn right.