Directed by David A. Prior
1989
85 mins.  Color.
VHS from Action International Pictures 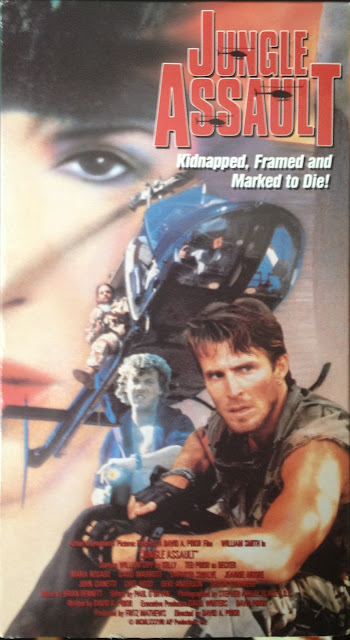 The year is 1989.  George H.W. Bush is in the first year of his term, the P.O.W.M.I.A. craze has passed (sort of), and the Iran-Contra affair has brought a small amount of attention to Latin America.  The video store boom is in it's heyday.

At this point, Prior is in the midst of his craziest time period of making three to four films a year.  During our conversation, he told me he wrote this film over the course of one evening.  It is pure subconscious genre cliche territory.  Entirely recognizable and in typical Prior fashion: 100% enjoyable.

The film is a journey into the strange psyche of American action film culture.  All the tropes are there in truncated forms.  They are heroes who returned home unrecognizable and now only know one way of life: Kicking Bad Guy Ass.

Ted Prior:
"This country doesn't give a damn about us."

The General:
"That doesn't matter, because you love this country... Your whole life you've only done one thing well, and that's fighting... Washington is not gonna do a damn thing about this."

Prior regulars, William Zipp and Ted Prior, journey from trial to trial.  It begins with a nightmare from Vietnam where Zipp totally stabs a dude through the heart with a tree-branch.

Now that they're home, they are down on their luck, and have been given another eviction notice.  So, they do what any red-blooded hero would... go to the bar.  While there, a lady "the merchandise" is brought in and laid out on a pool table.  After tearing open her shirt, King Kong Bundy does motor-boat on her tummy.

Zipp and Prior don't put up with that, and proceed to head-butt and break bottles over these scumbags.  The General splits a baseball bat over Bundy's head and then informs them that "Americans are getting slaughtered" in Central America.

Hot babe, Rosa, approaches three drunken American soldiers, who are big-time empirialist butt-holes.  They give Rosa a bunch of crap, to which she replies, "Kiss this, American pig," and slits one's throat before cutting down the other two with a machine gun.

The General's daughter goes all Patty Hearst and gets wrapped up with Rosa's terrorist group.

Needless to say, there's lots of fighting, punching, spin-kicks, shooting and lots of great "torture" scenes.  - Another trope of Prior's, Americans being tortured and then getting their revenge.

The Evaluation:
Although the film has little new in the way of ideas or themes, Prior never ceases to surprise.  Yes, the naive liberal daughter is taken hostage by the terrorists and needs to be rescued by the heroic vigilantes.  But, what's refreshing and fun in this one is the terrorists, who seem to have no motives.  Its the action itself that's surprising.  I'm always entertained by the jumping, punching and explosions.  They are captured in such a way, that there is no brutality.  It's just fun.
Likewise, the exteriors are so recognizable from Prior's other films.  Tin sheets make up all the buildings and the foliage is all Alabama all the time.
And, anytime I can watch Ted Prior, I'm on board.

The tape:
The quality of my tape was pretty great.  Picked it up very cheap on Amazon used.  I'm always a little shocked by the AIP unadorned label on the actual tape.  It's just text of the FBI warning.  Awesome.  Unfortunately, you get no trailers for Rapid Fire or anything sweet like that.