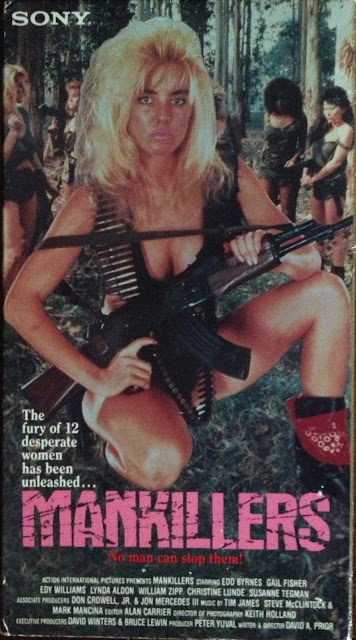 Action International Pictures brings us yet another killer Prior picture.  This is Prior's fifth film, and it's a playful riff on The Dirty Dozen... with Women!   Prior moved on from shooting on tape to 35mm with Killer Workout.  He followed that up with shooting Deadly Prey and Mankillers back to back for the newly formed Action International Pictures.  He uses many of the same actors and sets as before.  But, unlike his earlier endeavors this is straight exploitation fare. Women in Cages turns into a revenge film.

It's tough to be a woman.  All that hair and those tight pants.  Also, you're either a commodity, a criminal or a hero.  You're also disposable, even though you're expensive.

Johnny (William Zipp!) meets up with Manetti.  Johnny wants to see "the stuff."  NOW.  96% pure, first class stuff.  In return Manetti gets three adult human females.  But, Johnny doesn't keep his end of the bargain, as he knows Manetti is really an undercover Fed.

It's then revealed that Mickland (Johnny) was the best the Feds had. But, he's gone to the other side.  They need McKenna.  "She knows Johnny better than he knows himself and she's just as crazy."

Flashback, McKenna and Mickland are doing a bust.  She wears a sweater tube top and Mickland a white suit.  They are obviously looking pretty good.  An inane car chase / shootout scene ensues.  Mickland executes the criminal in the passenger seat and then orders McKenna to drop the gun.  Double-crossed, McKenna says it like it is.
"You used me."
"Your breaking my heart, baby."
"You Bastard."'
"Dumb bitch."

Mickland then shoots McKenna in the chest, and she wakes from a nightmare.  Then we cut to seeing her in a flannel shirt rolled-up 80s style and skimpy khaki shorts.  The Feds are paying McKenna a visit.  It's about Mickland.  He's back.

The feds tell her to assemble a team.  But, she wants women.  The feds are obviously skeptical.  Women can't do this kind of work, but McKenna won't accept that.  "They're more effective in the field.  You told me that.  The last thing Mickland would expect is a team of women."  Why?  Not really sure.  But where could she find twelve women for this kind of job?  Jail, of course.  But, they lack discipline and are forced to do lots of running and jumping jacks to really great 80s tunes.  The standout being "Stand Tough," which is totally sweet.

Lots of running.  Tire obstacles.  impromptu hurdles.  Of course some of their shirts are a bit loose and their shorts a bit too short. And apparently there is a shortage of bras at camp.  During grenade throwing training a renegade grenade lands underneath the trouble-maker, Rosetti, and McKenna pushes her to the side.
"You saved my life.  Why?"
"Because that's what being a team is all about.  Remember that."

Mickland works in selling white flesh on the black market, and he's not very logical.  He pays a dude named Jake a whole bunch of dough for three girls and then kills one of them because she doesn't want to make out with him.  He also fights the big dude from Night Wars, whom I'm assuming they've discovered is a Federal agent.  Mickland cuts him with a chainsaw.  Now, Mickland knows that they're coming in their cool cut-off shorts and ratty t-shirts / tank-tops.

The Finale is pretty incredible.  You think it's over, then it's not, then it is, then a ROCKET LAUNCHER!

The Evaluation:
Prior is at his best when he's got tons of characters to play off of.  In the same vein as Sledgehammer or Kill Zone, there are so many characters that each one seems expendable, and could be killed at any time.  The setting looks like the backyards of suburban America.  The aspect ratio is 4:3, to fit most TVs.  It's a joy the entire time.  Any time you think it might get dull, amazing tunes liven it up.  Just when you think you know what's coming, exactly what you expects happens.  There are stabbings, explosions, and lots of gunfire.

Exploitation films like this are such a political mixed bag, as well.  Every hero in the film is a woman.  They are all strong and can take care of themselves.  Prior threatens a few times, but never actually has any nudity in the film.  In reality, the sex trade continues to be an even bigger problem now than it even was then, and it's nice to see women cutting down those bastards.  (you even get to see Jake stabbed in the penis!)  And yet, their outfits seem to undermine all of this.  So great.

The Goods:
The VHS is solid.  VHS quality is always superior when something was actually meant to be distributed only for home video.  It's also the only format you can own this baby in.  They aren't messing around, either.  No trailers, but a sweet screen at the end with a phone number so you can order more home videos directly from Sony.  The cover is the sweetness and you get TWO taglines!
"The fury of 12 desperate women has been unleashed... MANKILLERS!  No man can stop them!"
-and-
"They're beautiful... They're deadly... They're on a rampage!"