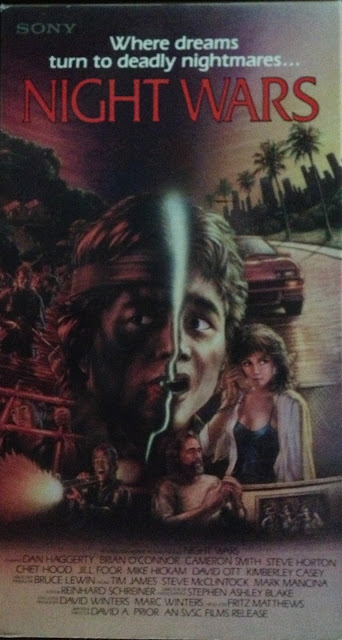 Rambo: First Blood Part II was a big deal.  Released in 1985, it made hundreds of millions of dollars both domestically and internationally.  Americans had lost their first war in history (if you don't count the war of 1812).  The film was a major part of regaining the American narrative of victory culture in the 1980s.  It was about winning the war this time.  It was about liberal Washington bureaucrats not allowing the soldiers to win.  It was about Americans feeling pride again.

David A. Prior was greatly influenced by this shift.  You can see it in Deadly Prey, Kill Zone and Operation War Zone.  However, by 1988 Reagan was leaving office and George H.W. Bush was taking over.  The narrative of regaining that victory culture was getting more complicated.  Prior wanted to make the war movies of his youth and include new dimensions.
He creatively combines Rambo, post tramautic stress disorder and A Nightmare on Elm Street. The result: Night Wars!

Night Wars isn't a pilthy little forgettable film.  It's incredibly entertaining, while being insightful at the same time.  Where Sylvestor Stallone and Chuck Norris were doing their best to win back America's pride by pretending that we can go back and win the war that got away, Prior is pointing out that it's just that, a dream.  Sure, American soldiers get to go back, get their friend they left behind, and beat those commie bastards.  But, at the end, it's all in their dreams.

McGregor is a douche (and an incredible actor).  He's working with Charlie and he likes to torment and torture American POWs.  Specifically Trent Matthews and Jim Lowery.

Jim lies awake at night, back home in the states reliving the horrors of his time at war.  He sits in his apartment with a pistol in his mouth.  Trent is having similar nightmares and sees Johnny (their friend who was killed in the POW camp) driving a car.  My favorite character is the car salesman.  He is probably one of the greatest geniuses ever.  My only regret with this film is that there isn't more of him.

Flashbacks and nightmares merge, red moonlight and lots of explosions lighting the scenes.  Nightmare Vietnamese soldiers cannot be injured and Trent and Jim watch Johnny die again and again.  Trent wakes up with a real injury from his dream.  On his way to work, he hears Vietnamese propaganda over his car radio and McGregor shows up in his passenger seat.
"You were a traitor!"
"I still am!"
Trent steps out of the car to see he's in Vietnam again.  Johnny cries out for help.  Shit literally just got real, well, dreams really, but you get it.  In the dream a soldier puts his machete up to Trent's neck and he awakens with a cut across his neck.

Trent heads to Jim's house and Jim is dressed in fatigues looking like Bill S. Preston esquire.  They drink lots of beer and discuss how to deal with this "whole damned thing... We were all meant to come home together or all meant to stay there.  We've got to go back in."  A large number of alarm clocks are purchased and guns are procured.

The most amazing sequences in this film are when Jim and Trent are in the dream warzone.  The actual Vietnam sets are impressive for low budget fare, but what's really awesome are the scenes in Jim's apartment.  They lay on the couch or bed, together and yell and shoot guns.  It's totally incredible.  I'm not sure if we're meant to believe that the bullets they are shooting are dream bullets, but if not, I think Jim's apartment has hundreds of bullet holes in it.  I'm also pretty sure they killed any neighbors who live upstairs.

Trent goes home to buy supplies.  "Where's the checkbook?  WHERE?  HOW MUCH?  THERE'S NO TIME!"  They buy guns from a sweet arms dealer and then return to find Trent's friend who is a doctor with a sweet beard (Dan Haggerty, who was also apparently in the war with them).  He thinks they're crazy and puts them at gun point to go to the hospital with him.

Lots of cool yelling and then Haggerty puts them under with sleep medication.  Ah, hell no.  But, wait, Trent is also at home with his wife, getting busy.  That can't also be Trent.  WHAT'S HAPPENING?!  It's not really clear, but I believe dream McGregor is posing as Trent in the real world.  Yeah, I don't know either.  Awkward sex / rape / murder scene to follow.  Haggerty feels pretty bad.  Jim and Trent get their gear together, put on camouflage makeup, fatigues and go to sleep.  The finale gunfights are pretty superb.


The Evaluation:
This is the thing about Night Wars, it's amazing.  The action is legitimately entertaining, and the acting is hilarious.  As I mentioned before, the scenes in the apartment are brilliant.  Sometimes I think of them when I'm just sitting there and start laughing.  The ideas behind it are really fun and creative.  What really makes it stand out, though, is the sheer enjoyment I get out of watching it.  The film quality has a great grain to it, and the music is an awesome blend of Casio keyboard presets and wailing electric guitars.  I had a smile on my face pretty much the whole time I was watching it.  There really isn't a dead moment in it.

And, Trent throws a rock at some dude's head and then runs over real fast to stab him a bunch of times.

The Goods:
Similar to the Mankillers VHS, this is bare bones, but perfect.  The cover is a totally sweet painting that I wish was on my basement wall.  On the back you get a picture of McGregor looking evil and Haggerty holding a pistol.
The tagline: "Where dreams turn to deadly nightmares... NIGHT WARS"