Directed by David A. Prior
1994
95 mins. Color.
VHS from Republic Pictures 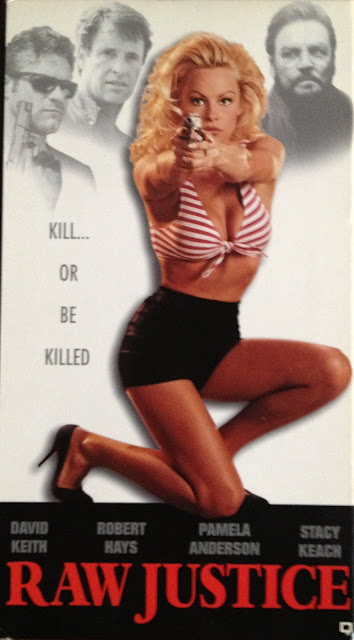 Made eleven years after his debut, Prior had headed into films with larger budgets.  Here, he's able to get a few decent character actors and the money-draw: Pamela Anderson.

The Set-Up:
Mitch is bad at dating.  He brings rich girl, and daughter to the mayor (Charles Napier, whom you know from Rambo: First Blood Part II!), Donna to play miniature golf.  Now, I've played miniature golf and thought it was pretty fun.  But, Donna disagrees.
So, she goes upstairs and decides to take a shower.  Little does she know that a sideburn-clad giallo-inspired killer awaits with a power cable to strangle her when she gets out.  No doubt there's more to this story.

Stacy Keach, in the role of a lifetime, takes a disc from the killer and then double-crosses him!

Mace, (David Keith aka the low-rent Patrick Swayze) is a parole officer hunting down a potential John and pays a prostitue (Pamela Anderson) to wear her clothes while he runs the John down.  Many jokes are made about his frilly shirt.  He arrives home to find that Donna is dead.  He throws his glass at the television set and cries.  Apparently, he has raw emotion from their breakup.

He awakens to find the mayor (we now hear ex-chief of police) in his home.  Mitch is out on bail and the mayor wants Mace on it.  In case you were wondering, Mace used to be a member of the police force.
"You're still a loose cannon and that's what I need!"

We then see the deputy mayor, who is STACY KEACH! Oh, God you are in for it now, mayor!
the plot continues to thicken.  Mitch finds a suicide note in his own handwriting in the freezer...  and then his house blows up!  A chase between Mace and Mitch ensues to the soundtrack of a blues guitar solo.  Dirt bike chase scene results in dirt bike crash scene in a mall.

Keith has a shootout and meets up with Sarah (Anderson) again, who is still upset that he stole her clothes.  Sarah drives while yelling awkwardly and Mace hangs onto the hood.  Now, Sarah is implicated and stuck with Mace.  There is no knowing where this relationship could go from here.  Oh, and it goes there in about thirty seconds, in a burnt out building.

Mace gets framed and Mitch and Sarah hang out a lot.  Cool sax music plays.  Mace fights a bunch of dudes who try to hold him up, and Mitch spin-kicks a douche.

Did I mention that every time Mace drives into a scene the first half-riff of "bad to the bone" plays?

Also, Pamela Anderson doesn't even count as a character.  She is only there to look good and occasionally be in sex scenes while bluegrass plays with various characters.  But, that's one of the main reasons this is one of David Prior's more famous films.  It's also the reason to have Pamela Anderson.  If he wanted a fantastic performance, he would've gone for someone else.

The Evaluation:
Raw Justice is definitely not one of David A. Prior's best films.  But, like most of his films, it delivers where it needs to.  It moves quickly, it has all the right incomprehensible beats in all the right places and it's fun.  Personally I like to see him work with a little less.  Once he's got this much cash, it seems that he takes things a little more seriously and it tones down the crazy.  That being said, if you were looking for a cheap direct to video action film, this one does just as well as any.  The action sequences are funny (spin-kicks make any scene worth watching) and the lazy acting is standard Prior goodness.

The thing with Prior is that he's not concerned with making great films.  He's interested in a very specific view of the world.  One that doesn't concern itself with plausibility or prestige.  He's interested in fun and in pushing out successful films.  This seems to be the ultimate representation of this.

The VHS:
Pretty standard.  You get a trailer for some Scott Glen movie and for something called Texas.