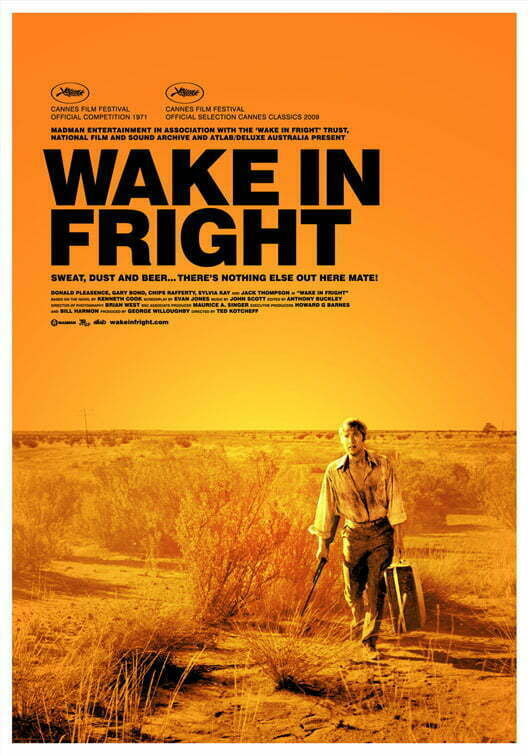 The Outback may be a sub-par steakhouse, but it's also a place in the wilds of Australia where drinking beer is serious business.  I was in Ukraine once, and there was a certain pressure to finish all of your food, no matter how full and vomitous you feel at the time. I got big time diarrhea.  It was not awesome. The outback is that way with beer.  Its' the social currency that all bonds grow out of.

Wake in Fright is the kind of film that makes you feel trapped.  It captures you and never lets go.  It has a surreal, nightmarish quality that has sat with me ever since I first saw it.  Images of a garish and giant Santa Clause ho-ho-hoing over the town square, a horrifying Kangaroo hunt, and unrelenting heat and dust feel completely overwhelming.

When you grow up in a small town, you understand the idea of a large claustrophobia.  The sense of being trapped in small town that you feel too big for is a feeling like no other.  Its' a strangling, suffocating sensation.  At the same time, it goes both ways.  Those who feel comfortable in the small place, have a sense of fear that others will move on, or think they are better than those who stay.  That deep division seems to be at the heart of the city / town divide.

In Australian terms, Sarah Palin would call Bundanyabba (The Yabba) the REAL Australia.  But, John Grant wants to head back to "civilization."  He simply cannot adapt to the ways of the Yabba.  Tortured by the outback, he's insolent to the locals, dismayed by their unquestioning loyalty to the Yabba, and easily drunk.  He has no understanding of the brutality of the games they play (whether it be gambling, kangaroo hunting or simply drinking beer).  Thinking he's above it all, he underestimates it and finds himself trapped.  He's currently a teacher, bound to the educational system until he can pay a sum of one thousand dollars.  So, he bets his semester's earnings at the local games and loses it all and is forced to stay in the Yabba.  He commiserates with Donald Pleasance (Doc) on his hatred for the Yabba and gets this brilliant response, "All the little devils are proud of hell.  Discontent is the privilege of the well-to-do.  If you've got to live here, you might as well like it."  I've never heard a more perfect description of the ways in which we over-glorify our situations to make ourselves feel good about them.

One of my existential nightmares is a night out on the town with the "boys."  And, that is exactly what the locals (Dick and Joe) see in John.
"What's the matter with him?  He'd rather talk to a woman than drink?"
And, so, they proceed to educate him.  In a turn of spinning camera shots and jagged cuts, he ends up in Doc's little shack and the existential odyssey takes continual turns for the worse.  Kangaroo gruel and beer for breakfast and Pleasance's sheer madness bring the tone to a fevered dream.

Wake in Fright is a masterpiece.  It's a perfect film.  The photography is stark and striking.  Taking place over the Christmas holiday, it has quickly become one of the best Christmas movies I've ever seen.  It captures the fish-out-of-water nightmare of being a city kid being in with the tough guys.  Both introspective and exploitation, it is extremely engrossing and thought-provoking.  Along the same lines as Blue Velvet, it is an unforgettable experience.  Mostly notorious for its controversial Kangaroo hunting scene (which is hauntingly horrible), it really should have become known for its' fantastic script and performances.

The process that a film like this takes is truly fascinating.  It went through multiple edits (The US and UK titles being Outback), that were quite different.  Damaged prints were carted around the world for decades.  The original negative went missing for years, only to be found again in 2000 at the Mountain Vaults in Pittsburgh.  (Near the Wampum Mine where they filmed Day of the Dead.)  A pain-staking digital restoration provide us with the current, and beautiful, version available from Drafthouse.

The disc also has some great special features:
Audio Commentary with Kotcheff
To the Yabba and Back - a documentary from Mark Hartley (Not Quite Hollywood)
Q & A with Kotcheff
A report on the rediscovery and restoration
Weird segment in weird show, Who Needs Art?
Chips Rafferty's obituary
And a wonderful booklet with essays and photos