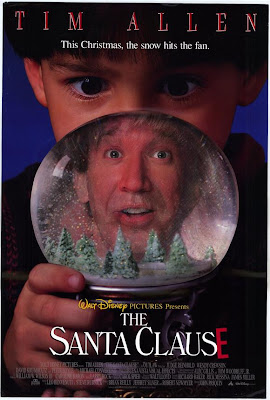 THE SATAN CLAUSE came out the same year my parents got divorced. I also had mononucleosis so bad that year I was referred to the Mayo Clinic. With Tim Allen being everywhere on TV, and with horrible mono all I could do was watch TV. I associate Tim the TOOLman with with the greatest of my first world problems.

This isn't about Santa. IT'S A MOVIE ABOUT DIVORCE AND BEING A HORRIBLE FATHER! According to the movie, the only way a divorced father can be a good father is to BECOME SANTA CLAUS.

My Dad sucks. When my parents got divorced, he never took me to the north pole.

Anyway. Scott Calvin (Shithead Allen) is a terrible father. He's a workaholic (similar to my dad. . . oh wait, no, he was an alcoholic, apparently that's different). He never has time for his son Charlie.


While Charlie is at Scott's home for Christmas, they scare Santa. He falls off the roof and croaks. Now Scott has to take over the reigns of Jolly old Saint dick.

Taking on the role of Santa makes Scott look like a pedophile while trying to win a custody battle for his son. He loses custody of Charlie while blowing up like a toilet at high traffic KFC in Orlando. He gets ultra fat and his hair turns grey.

Then he convinces his ex-wife and Judge Reinhold that he really is Santa by giving them a wienie whistle. Now they love him and are perfectly ok with their 8 year old son flying around the globe with a dirty coked out fat guy.

It's as if Disney executives saw a USA Today story about how high divorce rates were getting and decided it would be cool if they could make a Christmas classic for the divorced kid demographic.

Christmas movies should never use child custody battles as a plot device. I realize that I may be being a bit overly sensitive about it. My life has been pretty good. However, my parent's divorce was the single most devastating event in my life. I don't want a damn Christmas movie reminding me of it every single year.

Even if I didn't have such cold experiences with life during this films initial run, I think I would still hate it. It's too much of a family drama. It reminds me of those VHS / after-school specials that came with worksheets to complete with your parents about subjects such as drugs, sex, divorce etc. They'd usually star Malcolm Jamal-Warner or things like this would happen:

There were two more movies in this series too. I can only imagine the horrors that await me when I inadvertently see one of those.

I apologize for the extreme negative tone of this review. I probably come off as a hateful bastard. But tell me honestly, do you think THE SANTA CLAUSE has any redeeming qualities aside from smiling and farting reindeer (Crude moments)? 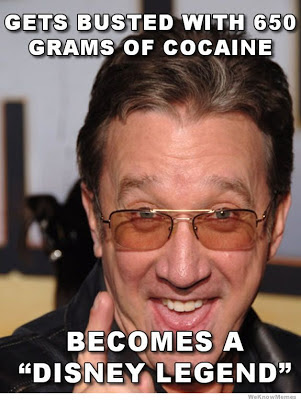