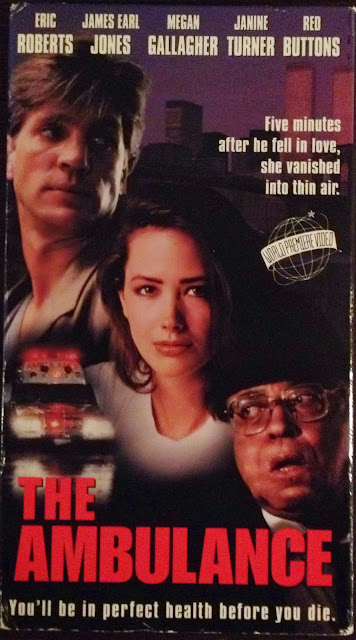 Larry Cohen's THE AMBULANCE is a weird animal.  Not that that is a surprise when watching a Cohen film.  His films are always genre-bending and more thoughtful than your regular schlock.

This particular film starts with a mullet-clad Eric Roberts, who is pretty attracted to some random girl on the street.  He approaches her for a date, there is some witty banter, and then the beautiful lady Cheryl collapses.  An ambulance shows up, they cart the lady into the ambulance, and she disappears.  Roberts visits every hospital in the city and there is no sight of her.

Turns out Roberts is a talented comic book artist who works for Stan Lee.  (Yep, that Stan Lee, character name Marvel Comic Editor).  Lee advises him to not go after sick girls, but he goes to the police anyway.  Unlucky for him, James Earl Jones is the crazy anti-comics detective, Lieutenant Spencer.

Anyway, Roberts is wandering the streets with a badly drawn sketch of the woman, that Jones aptly describes as Veronica from Archie.  Roberts eventually finds her roommate via the Veronica sketch, and they go on the hunt together.  They head to her work based on a mysterious message on the answering machine.  Little do they know that the evil ambulance and a bunch of horses will knock down Eric Roberts and make off with the roommate.

Next thing you know, Eric Roberts is having a breakdown, believes he is being poisoned, and ends up in the hospital.  While there, an awesome crazy old man, (retired newspaperman Elias) saves his life and they become partners in the mystery.

The Ambulance takes Elias, Jones hunts it down, takes a scalpel to the chest, gets run over, and enjoys an unhealthy amount of gum.  So, hot babe cop Sandra takes on the case and teams up with Roberts, only to land him in a junkyard where he gets beaten to a pulp by street toughs.  Bummer for him, The Ambulance is gonna take him away.  Well, the street toughs are easily convinced to then attack the Ambulance attendants, resulting in the best fight in cinema history.

Street toughs are disposed of, and Roberts then manages to get the back door of the ambulance open.  Unfortunately he's strapped into a gurney, this results in the best gurney luge scene in cinema history.


The Evaluation:
All the twists and turns are goofy.  The comedy is spot on.  The only thing that's really missing is funny explosions.  Cohen has a way of making things absurdly fun, and this film is no exception.  I must say, I was a little hesitant, based on the cover and the fact that here is basically no real press about it.  But, I was happily surprised at how fun and crazy this film was.    If you're looking for a fun little movie, check this out.

Before you go all diabetic: