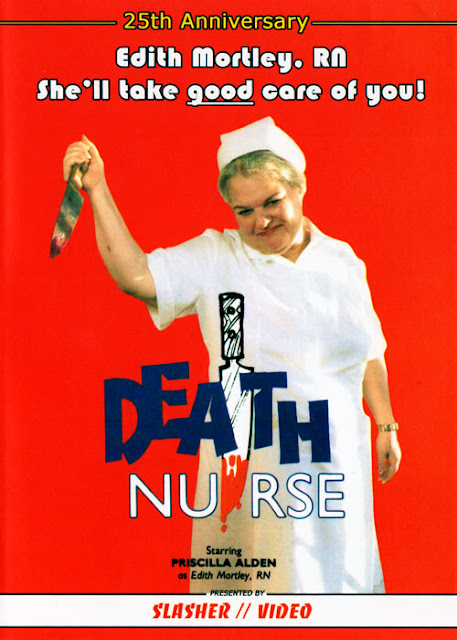 DEATH NURSE will shock you. It isn't scary. It isn't gory. It isn't chilling. It's bad. By bad, I mean easily one of the worst movies of all time. Sure, You've heard movies were bad before, but you haven't seen bad until you've seen DEATH NURSE.

So why would I be so excited to see it ? Because this is one of those rare bad movies that separates the "I think bad moviez R ironiclly hilaryuz LoLz" people from the hardcore. All other bad movies are the Pop Warner League. DEATH NURSE is the NFL with land mines on the sidelines.

Making a movie requires a lot of hard work. Regardless of budget. Every movie you have seen has a certain degree of planning, work, and dedication put into it. With DEATH NURSE, it's pretty clear that a lot of the leg work (and money) that goes into making a good film (or video) never happened.

Edith Mortley (Priscilla Alden) is a "nurse." Her brother is a "doctor." They run a clinic. They have arranged a plan with social services to care for people on the county's dime. They charge crazy amounts of money for the services they provide. These services include unnecessary surgeries performed with kitchen cutlery and pillow suffocation. After receiving these services, patients are buried in the back yard and the Mortleys continue to collect the county's cash. When a nosy social worker (played by Director Nick Millard's elderly mother) decides to check up on patients things get hairy.

I really don't want to taint the experience DEATH NURSE provides. But I will say you should get ready for a pillow fight. This movie has an unbelievable amount of padding. Padding is unneeded or lengthened scenes to increase the running time of the movie. Such scenes include digging holes, eating ice cream, feeding rats, eating pie, sleeping, showing clips from other movies, needlessly zooming in on people, pretending the cat is carrying around a dog's heart etc. Things that are never essential to the task at hand. Which for most movies is telling a coherent story.

Nick Millard enrolled the services of of friends and family. None of whom are technically actors. The film is less than 60 minutes long and about 30 of those minutes could be construed as padding. The set is someone's house. It was shot on production video (Beta). It would shock me if the production budget was over $1000.

At this point I'm sure you're thinking, "This sounds like a shitty home movie I made in Sixth Grade." DEATH NURSE was actually released by Video City Productions on VHS in 1987. While I could go on one of those long rants about the video boom of the 1980s, I'll just say in the 1980s  if you had the means to make a movie and it was in the horror genre, someone would release it. The video market was packed to the brim with crap back then.

DEATH NURSE may be one of the most cheaply and poorly made movies of all time. Though in recent years, has become quite expensive in the VHS Collector's market. Slasher Video has given those who choose to not spend $100 on a VHS tape a great alternative. The DVD is great and Slasher Video went above and beyond in the special features department. Here's the run down:

- Video Review with Paul from VHSCollector.com

- Death Nurse Q and A 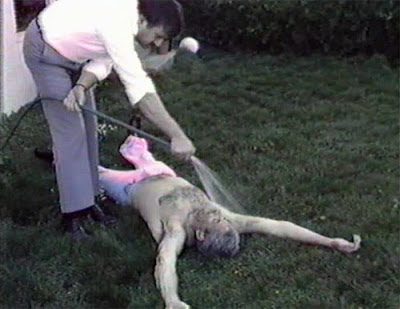 If you know what you are in for, DEATH NURSE is great fun. I honestly enjoyed my time watching DEATH NURSE. I actually found myself laughing out loud at several points. I'll put it bluntly; if you find a shirtless man pretending to be dead, being drug around on grass, then being sprayed in the face with a garden hose hilarious, I guarantee you will love this movie. If not, at least it's short.

Seriously. Go buy this movie: slashervideo.com. It's limited to 1,000 copies. So buy it and make your friends jealous when it's out of print. DEATH NURSE PART  II is also available.