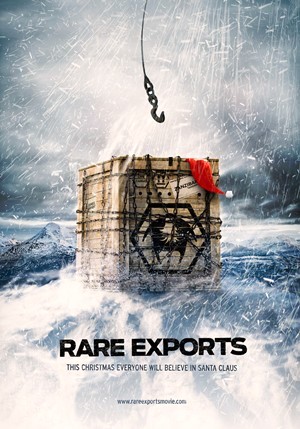 I can't recommend this movie highly enough.  There have been a number of great movies in the past two years that capture childhood perfectly.  Super 8, I Wish, Moonrise Kingdom, and Beasts of the Southern Wild to just name a few.  This film should stand right up there with them.

The film opens with a very creepy old dude who has started a giant excavation on a mountaintop in the arctic tundra of Finland.  He claims it is a sacred grave.  Pietari is a young boy who is endlessly curious.  He lives with his father, who seems to have a herd of reindeer and be a butcher.  Along the lines of John Carpenter's The Thing, this is an all male cast.  A community made up of hearty cold weather survivalists.  In essence, this film is about fathers and sons. There is a great moment when Pietari enters the butcher area and his father Rauno keeps his eyes closed and tries to protect his son.

Rauno's entire reindeer herd is found grotesquely killed.  Children go missing.  Supplies are ransacked. Pietari and his friend go hunting for who or what might be responsible.

Helander does a beautiful job shooting this film.  The cold blues and blacks dominate.  The oranges and reds in the house and butcher shop feel like a small escape from the formidable cold only for small warm moments amidst father and son.  The cold seems to get into the very bones of the film.

Likewise, the monster makeup and effects are, for the most part, fantastic.  There is a fair amount of CG that is a bit distracting later on in the film, but for a film like this with this kind of budget I don't really see that as a major problem.  The cheap nature of it is even a bit charming.  Helander does a nice job of using practical effects and makeup when possible.

What really makes this film stand up on it's own is the performances.  The relationships among the men come across as completely natural.  Likewise, the concern and love for fathers and sons is convincingly heartfelt.  Most American horror seems to shy away from this dynamic.  It feels as though most young protagonists in American horror films are either alone, baby-sitting, have uninvolved parents or are horrible people themselves.  However, here the macho unapproachable male father is completely absent.  Pietari is a very strange kid.  He comes across as a sweet artsy kid, little understood by his gruff and tough father.  And yet, this plays like a fantasy of a young misunderstood kid.  Loved and accepted by his father.

The ending gets super goofy, but if taken in stride, is a wonderful Christmas tale indeed.

The Goods:
If you can't make it to the Trylon, Oscilloscope has put out a great blu-ray release of the film.  It includes the two short prequels that inspired the feature, a making of, concept art, behind the scenes stuff, trailers and the 1964 classic, Santa Claus Conquers the Martians (1964), which is awesome.
You also get this quote on the back:
"Deliciously creepy.  Alongside Gremlins and The Nightmare Before Christmas, this audacious and unashamedly silly gift is an anti-holiday cult classic in the making." - Village Voice