For Today's Box Art, I present to you, the Popingo Video pre-viewed New Release from 20th Century Fox Video of Home Alone (1990).
"When Kevin's Family Left for Vacation, they Forgot One Minor Detail: Kevin!" 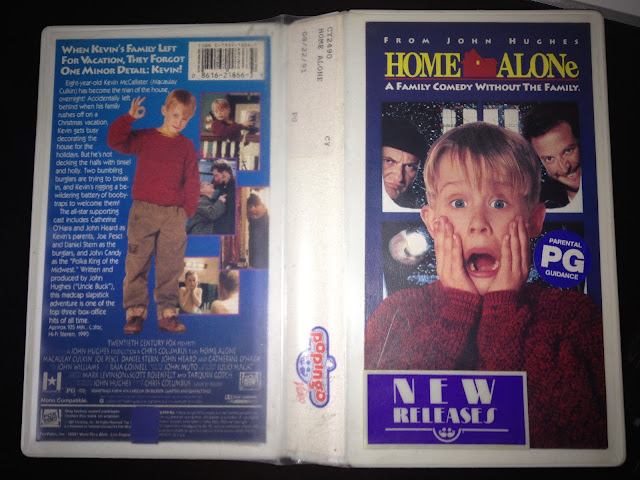 "Eight year-old Kevin McCallister (Macaulay Culkin) has become the man of the house, overnight!  Accidentally left behind when his family rushes off on a Christmas vacation, Kevin gets busy decorating the house for the holidays.  But he's not decking the halls with tinsel and holly.  Two bumbling burglars are trying to break in, and Kevin's rigging a bewildering battery of booby traps to welcome them!
The all-star supporting cast includes Catherine O'Hara and John Heard as Kevin's parents, Joe Pesci and Daniel Stern as the burglars, and John Candy as the "Polka King of the Midwest."  Written and produced by John Hughes (Uncle Buck), this madcap slapstick adventure is one of the top three box-office hits of all time."

We will probably do a full review of this someday, as we grew up with it as the ultimate Christmas movie.  But, it felt right to include it this year.  My parents bought this from Popingo in Sioux Falls, SD as soon as it was for sale.  I watched it so much that the tape is now barely viewable.

That box art is super killer, though.  Kevin is doing that stupid I put my hands on my face and scream thing.  (wow.  That was a thing, wasn't it?)  Then, you've got Pesci and Stern as the Wet Bandits, creepily peering though the window.  And, on the back you get so dee Pesci's head on fire.  I always loved slapstick comedy.  I marvel at Keaton and Chaplin.   (I also still stop at America's Funniest Home Videos... people getting hurt gets me every time).  This movie captures that perfectly and then takes the violence another step.  In reality Kevin would have killed the Wet Bandits multiple times.  (An iron dropped down the laundry chute at that speed would have given  Stern traumatic brain injury at the very least).  The art doesn't quite capture that, but instead makes Kevin the hero.  In reality, all kids just loved the bandits and that creepy guy with the shovel.  So, we'll save that for another time.