Christmas Evil (aka You Better Watch Out) Review 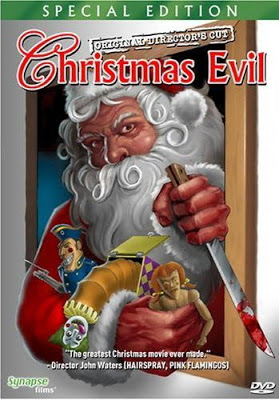 Christmas Evil is such a strange, hybrid-genre film, I can see why the marketing is so terrible.  All the posters, descriptions, and trailers are misleading.  It gets lumped in with Silent Night, Deadly Night and Black Christmas, but I think that’s a problem.  Those are both great films, but this is not really a slasher film.  This is not a horror film.  This is a genuinely original psychological film more in the vein of George Romero’s Martin or Taxi Driver than Halloween.  That being said, it’s got some genuinely crazy awesome gore sequences and is extremely entertaining.

Harry Stadling (brilliantly played by Brandon Maggert) is forever scarred when he decides to go downstairs on Christmas Eve to see the real Santa Claus and instead sees, what we presume is his dad, getting physical with his mom.  Not surprisingly, the kid is disturbed.  To be fair, that’s pretty messed up.  As a result Harry grows up overly obsessed with Christmas.  He keeps tabs on the neighborhood kids, spying on them with binoculars and writing them down in the good boys and girls book or the bad boys and girls book.
Harry works at a toy manufacturing shop, Jolly Dream, and has recently been promoted to manager, where he is horribly sad that he no longer works directly with the toys.  His coworkers are douchebags and one of them fools Harry into working one of his shifts so that he can go out with his wife, but in reality he is going to the bar with his friends, which Harry sees in a later scene.  Harry’s bosses laugh at him for wanting to donate a lot of toys to the children at Willowy Springs (the horrible State Hospital).

Harry becomes more and more agitated as he sees all these people not having the Christmas spirit.   On Christmas Eve, Harry has finally had enough.  He paints a sweet Santa sleigh on the side of his van and glues a white beard to his face, but then seems to immediately regret it, trying his best to tear it off.  Maggert here takes over the role completely with his eyes and shows the mad desperation growing within Harry.  He embraces the becoming of Santa.

From here, Harry steals toys from Jolly Dream to bring to the Hospital.  It’s really quite amazing how the tone of this movie continues to shift.  Harry’s generosity is genuinely touching.  This is the moment that every great Christmas movie is able to capture, the idea that the Christmas spirit is all about generosity.  And yet, it then changes quickly again as he parks his sleigh van outside his bosses’ church as they attend Midnight Mass.  As the parishioners exit the church, some yuppie bastards in their 20s notice Santa outside standing by his van.  They immediately approach him.   One of them says to him:


“Well, Santa, are you ready for a busy night?”
Harry responds, “I have something for you.”
The smarmy bastard replies, “Oh, what is it?  I have superlative taste.” (how outstanding is that?

Harry then stabs the yuppy in the eye with the gun of a toy soldier.  It’s super grotesque and incredible.  He sinks a hatchet into the other yuppie's head and then runs to his sleigh van to escape.  The gore effects are cheesy but awesome.  But, Jackson lets the camera linger on the leftover chaos.  What could just be a really sweet, and super funny, moment suddenly turns very dark.  I found myself laughing and then immediately getting quiet.

Harry comes across a Christmas party and stops to watch through the window.  Harry’s sad eyes linger on the happy group, and then two men inside notice Harry and bring him inside.  Awkwardly, Harry enters the group, but is soon caught up in the excitement and after much merriment, Harry delivers an amazing monologue to the children at the party:

"And, I'll bring you something... horrible."

Harry is chased by mobs of people searching for the killer Santa Claus.  From there, Harry gets stuck in a chimney, has his revenge on his co-worker, gets choked out by his brother, and then punches his brother in the face.  With a great surprise ending, Jackson has provided us with what is fast becoming my favorite Christmas movie.

The Hype:  You shouldn’t need to do much convincing to get people to watch this with you.  But, if you do find there is some hesitation, you could just tell them, “It’s like A Miracle on 34th Street with Travis Bickle as Santa Claus.”

The Goods:  Synapse Films did a fantastic Special Edition release in 2006.  It has two audio commentaries (one with John Waters?), the never before seen Director’s cut, story-boards, and a nice note from Jackson.  You also get a fun little comic from Rick Trembles Motion Picture Purgatory that basically gives a four panel run down of the film and, of course, the wonderful Synapse Films catalog.
Unfortunately, the cover choice of the DVD isn’t very good and continues the tradition of mis-marketing the film.  But, you do get this quote on the front: