"Your invited to Orville's coming out party!  It'll be a Scream!  ...Yours" 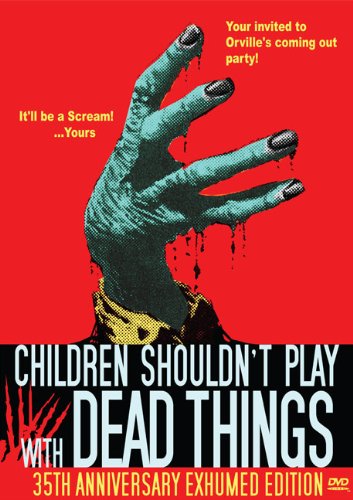 "Led by a mean-spirited director, Alan (Alan Ormsby), a theater troupe travels by boat to a small island graveyard for buried criminals.  Using a grimoire, Alan begins a seance to raise the dead.  The group finds more than they bargained for when the dead return from their graves, forcing the troupe to take refuge in an old abandoned caretaker's house.  Can they stay put until daylight against the undead onslaught, or do they flee into the pitch black night?  Will anyone survive?  ....Muhah hahahh!"

You may be wondering what this film has to do with the Holidays.  Well, nothing, really.  But, it is directed by Bob Clark, who directed Black Christmas and A Christmas Story, which I will be reviewing soon.

This movie is mostly remarkable because of the title.  Man, they just don't name stuff like that anymore.  Now, it would probably be titled, "Possession" or "Seance" or something.  Anyway, this film is very VERY weird.  The theater troupe hates each other and the dialogue is just them hating on each other for 45 mins.  There is an especially bizarre scene when the director has a wedding and marries one of the corpses.  Then, enter zombies.  From there on, it's basically trying to play off of Night of the Living Dead, which is no problem for me as that is one of my all time favorites.

VCI's 35th Anniversary Exhumed Edition is pretty great.  There is a commentary by Ormsby, Daly and Cronin, a tribute to Bob Clark, a Grindhouse Q & A, and interview with Ken Goch (real-life grave digger), a photo gallery, a few music videos by The Deadthings, trailers, etc...