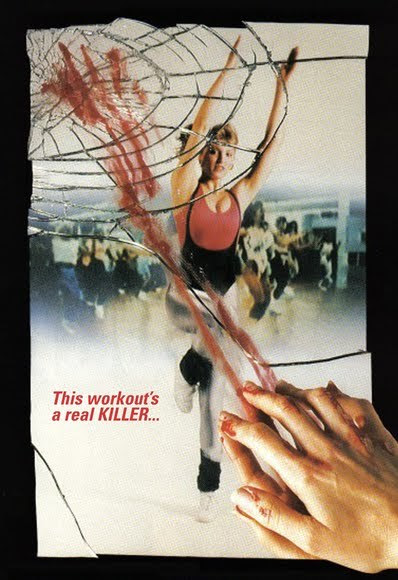 David A. Prior is an All-Star Video favorite. Sledgehammer, as you will soon find out, is the current gold standard for us when you talk about the largely unseen that simply must be experienced. Killer Workout is Prior’s third film, and it’s hilarious. I am finding it incredibly difficult to not tell you this is the best movie ever made in the history of film, so I won’t even try. It’s his first film shot on 35mm, but the only way to watch it is on Youtube or buying it on DVD from “Mom N Pop Video Shop,” a little public domain operation that most likely transferred the movie from a VHS tape. They have a “David A. Prior Collection!”

With Killer Workout, Prior does away with plausibility, continuity, and characters. He goes right to the jugular: Girls doing aerobics in weird 80s leotards, the best fight scenes ever caught on film, a great synth-pop soundtrack, awkward nudity, and a serial killer with the worst weapon I’ve ever seen. But, that doesn’t it mean it’s poorly made or fails to entertain. Prior was a young man learning the craft, and this gem captures the spontaneity of non-professionalism so perfectly.

The film opens with a young lady (we don't see her face) coming home to an answering machine message saying that she will be on the cover of Cosmopolitan, but that she needs to be tan because the agent said she would be. She ends up at Second Sun Tanning Salon to brown down. While inside the tanning bed, something goes horribly wrong and flames begin to shoot out. It’s pretty awesome. Years later Final Destination 3 would totally rip this off.

Rather than give you a full rundown of the film, here are three sequences in the middle that exemplify the reasons you should watch it. Chuck (the amazing Ted Prior) is taking out garbage behind Rhonda’s Workout (where most of the movie takes place) and a Camaro aggressively stops right in front of him. Chuck angrily throws the garbage to the side and out steps Jimmy. This being their first time meeting, this is their exchange:

Chuck, “Hey, what’s your problem?”
Jimmy, “Problem? I don’t have a problem. New around here?”
Chuck, “First day. Who’s asking?"
Jimmy, “Someone who’s going to give you some real good advice. Stay away from Rhonda.”
Chuck, “Get out of here.”
Jimmy, “Stay away or I’ll take you apart, piece by piece.”

Then, Jimmy throws a punch, and they have a sweet fight. Jimmy attempts a spin kick (!) and Chuck shoves him against the wall. Meanwhile, busty babe Deb comes out in a pink leotard with a strange mesh covering and a MASSIVE golf visor. She watches for a moment and then asks Chuck if he’d like to go for a ride. He replies, “That’s the best offer I’ve had all day.”

From there, they go to Deb’s house and sit in the front yard. Deb goes inside to change. Chuck picks up the phone (yep, they are outside on the front lawn and inexplicably there is a phone on a little table), he proceeds to dial:

Chuck, “Mr. Erickson, yep, I know all about that. I haven’t done that yet. Don’t worry about it. I gotta go.” Deb comes out in a robe.
Deb, “You aren’t leaving are you?”
Chuck, “I need to get back to Rhonda’s. I’ve got a lot to do.”
Deb, “You have a lot to do right here.”
Chuck, “Is that right?”
She then drops the robe to reveal she is now in a bikini and they make out. End scene.

Prior’s depiction of women here is absolutely appalling and hilarious. Every female shown in the film has the exact same body type (giant boobs, super small waist). The entire wardrobe for the women consist of workout leotards that show too much skin. In-between every wildly entertaining moment of dialogue (I am quite convinced there was no “script” per se, just a basic outline) there are close-ups of women doing aerobics, which are obviously very sexually suggestive. Somewhere in the back of his mind, I think Prior was attempting to make a point about how image obsessed the aerobics world is (this actually sort of comes through and isn’t just me trying to give him credit, but I won’t reveal how). However, what really comes across is that this dude loves watching hot ladies gyrate and thrust.

Most surprising thing about this movie:
Not very much nudity. Sure, you get a little, but by the amount of time that the camera is directly focused on women’s breasts, surprisingly sparse.

The Hype:
In order to convince your friends to watch it with you, tell them this: “Someone is murdered for vandalism.”

Needless Trivia:
- Prior hated working with the cinematographer because he didn’t respect his opinion. Apparently that cinematographer hadn’t seen Sledgehammer, or didn’t enjoy close up shots of spandex clad breasts.
- Chuck is also the name of Ted Prior’s character in Sledgehammer. Not sure if this means that this is a spin-off from that movie or perhaps an inside joke between Ted and David.

Set Yourself Up:
Gather two or three friends in a dark basement. There are some movies you should watch alone and some you shouldn’t. If you’re a weirdo (like us), you can probably have a good time with this one on your own, but it’s best with friends. Purchase some sweet alcoholic beverages. You’re probably best off with Coors, Schlitz or Pabst. If you’re going to make a night of it, go Karkov. Cocktail Weenies, BBQ sauce, taco flavored Doritos.

You can find Killer Workout in it’s entirety on YouTube here:


You can also buy it on Amazon from the Mom N Pop Video Shop. It is a print on demand DVD with no special features whatsoever. All of their releases are based on getting films in the public domain. However, if you buy this DVD you are treated to a great german poster on the front, pretty sweet neon lines and four outstanding stills from the film.
You also get this fantastic description on the back of the DVD:
"Two Years ago, a young woman named Valerie was burned after entering a tanning salon. Now, her twin sister, Rhonda runs a local gym where all of a sudden, people are being murdered."