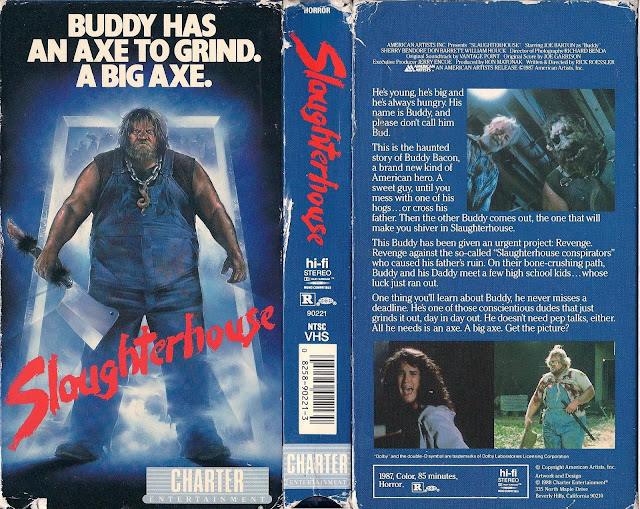 Frankly. It's awesome. You get a big fat redneck wearing bibs. He has a sweet swamp dweller necklace. He looks like he hasn't bathed in at least 6 days. He has a huge meat cleaver, which has obviously been customized to meet his demanding specifications (fur tufts, extended handle etc). Gentle smoke bathes our beefy redneck and light pours through the doorway for effect.

The title looks brutal. This title style has been done by hundreds of slashers. How can you argue with it though? Bloody titles certainly add color to usually very dark box art. The renter/buyer knows what kind of movie it is immediately and are usually treated to quite a bit of gore.

I must say that someone put a great deal of effort into this drawing. It's very well drawn and very effective. It looks menacing. It showcases the killer very well. During the age of Freddy and Jason, everyone was looking for the next big killer. While Buddy might look a dirty badass, he never became a household name. I certainly commend the artist for his efforts on this box.

Pretty much a Texas Chainsaw Massacre wannabe. Just look at the photo on the box in which buddy has a "leather face" that looks like himself as a troll.

Admittedly I haven't watched this movie for a few months. I remember it being pretty slow. Not very gory. I also recall Buddy being a dimwitted redneck and not very likable at all. The box paints Buddy Bacon as being a larger than life character and he just falls flat on his face. He's boring. I think the filmmakers were going for Leatherface. . . with a face. They swung. They missed. Big time.

They try very hard to make Buddy the "Hero" but back then, the more brutal of a killer you were, the more the audience loved you. They give Buddy a cause. Killers aren't supposed to have a cause in slashers. They're supposed to be indiscriminate murdering animals. Look at Michael Myers, Freddy Krueger, and Jason Voorhies. Maybe if the kills were more memorable or bloodier people would have liked it more.

WHAT'S BETTER? THE MOVIE OR THE BOX?

The box. Hands down.