Rant: That Greasy Video Store Guy You Can Trust 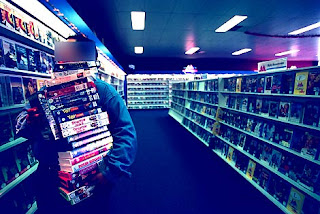 We started this site to discuss films that have been ignored, misunderstood or forgotten.  Netflix and other online media sources have made a giant glut of films available to stream and, in  effect, deemed them all disposable.  There are now thousands of titles available at any moment, but without a sense of direction or recommendation, it is as if we are all in that situation at the video store again, when we just wander the aisles.   In the end, it was always that greasy guy behind the counter who had the best recommendation.  (Some sweet smelly dude at Suncoast Motion Picture Company recommended Riki-Oh: The Story of Riki and for some stupid reason we ignored him and years later regretted it.  Thanks and sorry smelly guy). We, in effect want to be one of the sweet smelly guys who you can trust.  For years, we had been hunting down and sharing films together.  Now, we are sharing that process publicly and as we do, we're hoping you will share films with us as well.  We will share some forgotten or little talked about gems, and some films that should be reconsidered.  Some of the films we are extremely excited about can't be considered "good" in the traditional sense, but we share them because they gained our affection in one way or another.

Over the past fifteen years there seems to be more curiosity about exploitation films and “bad” films.  Much of this has arisen out of an ironic disdain for such films.  Films like The Room are a prime example of a generation that loves to dote on and share “bad” films.  We were definitely part of this.  In high school, we would have “Fests” where we would watch 14 hours of bad films in a row, and then go to school the next morning.  It was a badge of honor to see each other so exhausted, but it was also a deep social connection.  I had a “Bushwhacked Party” at my parent’s house one night and I remember fifteen or twenty people coming over to watch Daniel Stern bumble his way through the insane 1995 film.  Certain members of the group watched with a certain disbelief and bored disconnection.  However, for the rest of us, it was magnetic.   At the time, something about sharing that experience with others and laughing at the film was the whole enjoyment of it.

A few years later, I was introduced to Jean-Luc Godard’s Breathless (1960).  I was astounded.  I began to see film as a transformative art.  I wanted to study it and be near it in anyway that I could.  Like most, I began hunting down every classic director I could find and watching everything I could get my hands on.  However, I was always trying to reconcile my love of the strange little "bad" films that have no reason to be respected, but have their own charm.   At first, it was defending truly brilliant films like Videodrome and Dawn of the Dead.  But, soon,  I was recognizing the drive to find anything different and I started re-thinking the “value” of films altogether.  Obviously, something like  Blow Out can’t be discussed in the same way as An Autumn Afternoon or Touch of Evil.  But, It is both entertaining and insightful.  I truly love the film.   I have moved beyond the irony.   I now see that films like The Dead Next Door and Frankenstein Conquers the World can be as interesting and worthwhile as any major studio film or art film.   In the no-budget movie world, there is a sense of surprise and tension that cannot be found in most Hollywood films.  You can’t tell where the film is going because of its possibility for true spontaneity.  There is not a million-dollar budget, so there is no producer to keep things tight.  There are no seasoned professionals to keep it within the parameters of the three-act format.  There is no studio keeping tabs on their investment.

A film like The Avengers is enjoyable because it is so predictable.  Each beat is pre-described for the audience. But, because of this I find it completely forgettable.  When you are looking for an entertaining and interesting film, the plots and ideas really aren’t that much different between Phantasm and Thor.  However, for those of us that spend every moment of our free time that we can on watching films, the predictable becomes increasingly tedious.  Therefore, something like Phantasm has that much more appeal.
I will say here, that I do think there are bad films.  But, I think those films probably connect with someone and I see no reason to run them down.  In the end, a huge fraction of the films one will either enjoy or dislike is completely conditional.  I wasn’t ready to enjoy and truly love Kubrick’s films when I was a teenager, but re-watching them now as an adult, I love them.  Likewise, a film like Sledgehammer is so much more enjoyable with a group than it is alone.  And, because of that, we are not going to be focusing our attention on films that we don’t enjoy.

I will definitely be writing about all kinds of films here, because my tastes are varied and my enjoyment of movies is not contained within one type of film experience.  However, I hope to make it clear that we don’t love things simply because they are bad.  There is, of course, a certain irony in acknowledging that something is poorly made, and yet finding great enjoyment in it.  I’m as guilty as anyone in this. But, I also understand there is a certain cruelty in that.  Laughter and degradation of films come at the expense of honest intentions and very often, a lot of passion and hard work.  And, it is this passion and hard work that I find so entertaining and exciting.  It is often people working with limited resources, trying to create something worthwhile.  It is not our goal to make fun of these films or the people in them, but to bring attention to the ones that we think are worthwhile.