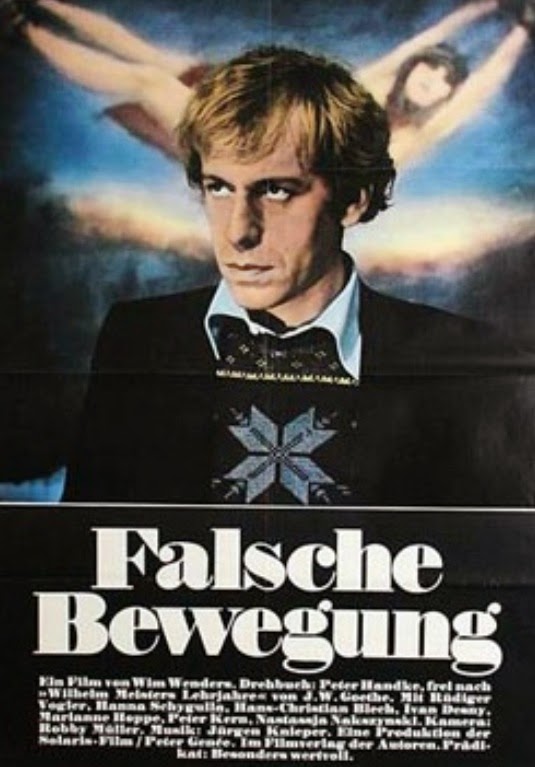 As I began to sit down and think about the second film in Wim Wenders' road trilogy, I found myself searching for themes and answers.  I'm a little lost in the images.  And, I guess, that's the point.

Full of characters that could be ghosts or fantasies, it is a wandering, dreamy journey.

The film begins with Wilhelm, (Rudiger Vogler), listening to records at his mother's house.  He peers out the window and is overcome with frustration.  He punches through the glass and and then looks down at his bleeding hand, seemingly to contemplate its meaning.

At one point, Wilhelm sits on a train and the seat across from him has drops of blood running down the seat.  A woman across the tracks stares at him through a window (he becomes obsessed with her and will meet up with her again) and when he looks back to the seat an old man with a bloody nose sits there.  He turns to Wilhelm and says "Do you want to know why my nose is bleeding?  It's because of remembering."

Watching this film is a bit like that.  Moments stand out, feel difficult to take in, and then seem to make sense in the whole.

As I look back on my description of it, it sounds tedious and aimless.  But, that is not at all the case.  This isn't some kind of surrealist pantomime of a film.  There are just... absurdities.  For instance, when the old man mentioned before begins to tell Wilhelm who he is, the mute young performer girl with him, Mignon, plugs her ears as if to keep some kind of mystery.

In the end, Wilhelm is seeking solace.  Characters come and go, babies in alleyways cry, men yell from windows.  And, Wilhelm is a misanthrope who wants to write about people.

But, a synopsis is besides the point.  What Wenders is fantastic at, is portraying ideas.  For instance, Wilhelm gathers an old man who was an Olympian, a young mute street performer, a beautiful actress and an overweight poet that invites them to his uncle's house.  When they arrive at the house, they find they are at the wrong house, and inside is a man who was about to commit suicide.  He speaks to them about the paradox of loneliness.  "It is in the moments of theatrical loneliness that I feel the most reborn."

It's best not to fight films like this, but instead to ride with it and take in what you can.