I HATE YOUTUBE is a look at the current mess of life that Matt leads. He typically comes home from work, takes his clothes off, busts open a beer and fires up YouTube and goes shoulder deep into the filth that resides in it's depths. Here, he discusses his findings.

There is no greater example of the wasteland that is YouTube than Baywatch - Season 6, Episode 15 entitled, "Bash at the Beach." When I was a kid, just discovering the world of sex, I couldn't bring myself to watch Baywatch. That's how bad I thought the show was. It's the most poorly acted show ever. . . and it's about lifeguards.

Throw in Pro-Wrestling (Which I loved) and unfortunately, It was a must watch.

There are two plots in this episode. The "A" plot centers around Hulk Hogan and Randy Savage fighting Ric Flair and Vader. Flair and Vader purchased the Boys Athletic Club and plan to turn it into Condos. The lifeguards of Baywatch have been assisting the owners of the Boys Club financially but the owner has to sell.

The "B" plot centers around Stephanie Holden (The Flat One) getting skin cancer and being totally over emotional about it.

To get it out of the way, Holden gets a biopsy. Mitch Buchanan (Hasselhoff) Spends the entire episode consoling her. Holden get so emotional and weird that she tells some sweet bikini babes to load up on sunblock like an oppressive fascist. It was so embarrassing, I fast forwarded past it.

The "A" plot starts out with a Ski-Doo crushing Hulk Hogan's skull during a race with the Macho Man Randy Savage. This is the best thing that ever happened on Baywatch.


CJ (Pamela Anderson) rescues Hogan. They somehow arrive on the topic of the Boys Club during their 30 second conversation. Apparently the club will be torn down by the new owners.  Hogan and Savage go pump iron there. It's sweet. Then the kids ask where they're going to train if the place gets torn down.

Flair, Vader, and "The Taskmaster" Kevin Sullivan show up and reveal they have purchased the Boys Club. Hogan and Savage challenge Vader and Flair respectively to matches. Whoever wins, gets the Boys Club. This makes no sense at all. Why would Flair and Vader accept this challenge? They have nothing to gain and everything to lose.

To keep this short:

1 .There is a training montage featuring Hogan running down the beach being followed by kids a la Rocky 2. 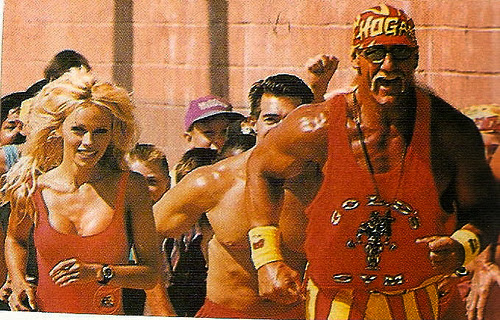 2. The matches at the end feature punch sound effects. For anyone that at anytime has watched pro wrestling, this is disorienting and sad.

3. Hogan and Savage win and Hulk kisses the deed to the Boys Club.

4. The episode ends with Holden on the beach at sunset, facing her cancer with Hasselhoff and some phony Yanni tunes.

5. There is a guy wearing a wrestling singlet with a T-shirt.


The only thing remotely interesting about this episode in the context of pro-wrestling is it's airdate. 3 months after air, the nWo would be formed and Hogan would turn heel (Bad Guy). The episode would not have been possible if Hogan was a heel. . . well, timing is everything, I guess.