Collecting Physical Media is a dying hobby.  Digital Media is becoming more overwhelming and prevalent all the time.  Streaming services offer what seems to be an unlimited amount of titles.  However, services like Netflix and Hulu are actually far more limited and temporary.  So, in our hunt to find interesting titles that can only be obtained physically, I offer you FINAL IMPACT. 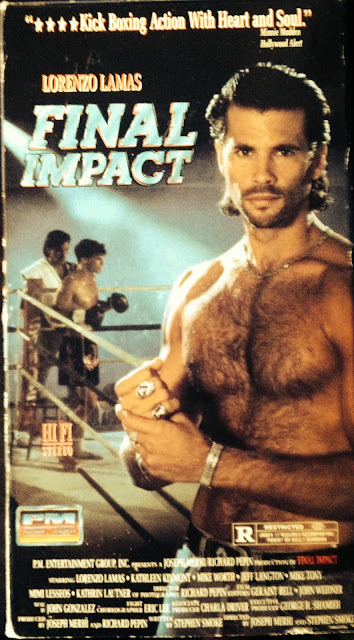 The Description:
"Former World Kickboxing champion Nick Taylor (Lorenzo Lamas - Falcon Crest, Night of the Warrior) sees in young Danny Davis (Mike Worth - Teen Wolf Too - Back to School) something he's never seen before - a fighter who can beat reigning champ, Jake Gerard (Jeff Langton - Rocky 5, Die Hard 2, Lion Heart).  Nick agrees to train Danny because he wants to avenge the merciless beating he suffered at the hands of the sadistic Gerard three years earlier.  In a bloody ring in Las Vegas, the past and future collide.  For one man it will be... the FINAL IMPACT." 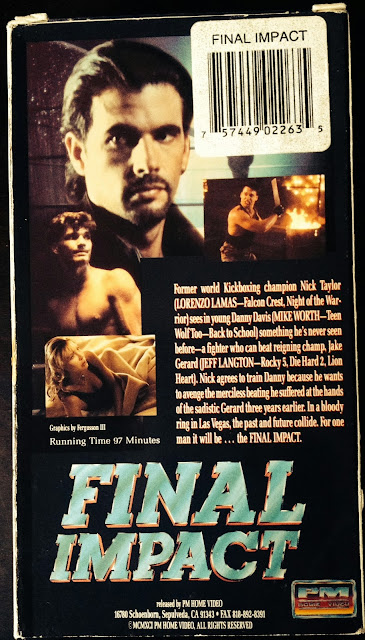 On the front you've got a shirtless Lorenzo Lamas looking pretty confused and blinged out.  A faintly lit boxing ring in the background and a very unspecific and rather misleading quote from Minnie Madden at Hollywood Alert, "Kick Boxing Action with Heart and Soul."

Really, though, the only reason I picked up this film from a little video game / video place in the burbs is because of that logo near the bottom.  PM Home Video.  And, directed by Joseph Merhi (the M in PM) no less.  Also, how awesome is Jeff Langton?  He manages to come in to series to only be in the worst ones?  Perfect timing, Langton.

The back is pretty stellar.  Four completely out of place pictures are badly cropped and laid on top of one another.  A strangely out of focus Lamas is next to a dude in a tank top with a board in front of a trash can that is on fire?  Mike Worth has his shirt off and looks confusedly at Lamas' chin.  A lady in a tank top in bed also seems to be staring in that direction...  I love pre-photoshop graphic design.  It's either a terrible mess or a great triumph.

The Film:
Well, not very good unfortunately.  I was hoping for a Kickboxer 3 ripoff with Lamas instead of Sasha Mitchell.  Because PM put it out I was hoping for the craziness of Rage, the stupidity of Skyscraper or the hilarity of Mayhem.  Instead, it's just pretty boring.  It starts off sort of strong, I guess.  Some sweet club that has both girls mud-wrestling and dudes punching out is owned by Lorenzo Lamas.  Mike Worth shows up to make a name and well... who cares.  It doesn't work and is pretty dull.