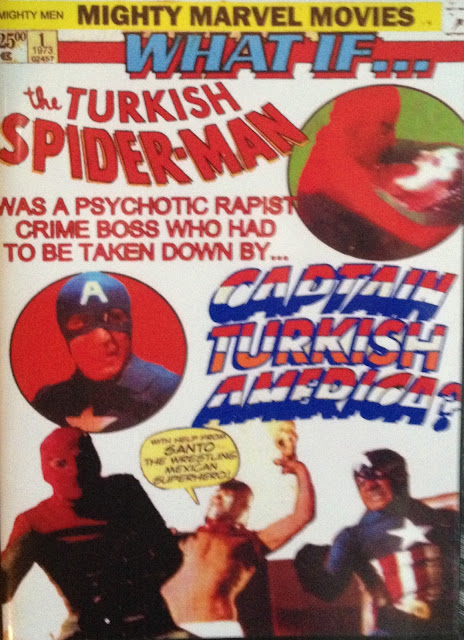 Okay, Turkey, you win.  I thought the weirdest, and best, bizarro cinema in the world would probably come out of Italy, Japan or the States.  But, I was wrong.  Turkey makes the craziest, most non-sensical masterpieces on the planet.

Perfect example, Three Giant Men.  It is also notoriously known as Turkish Spider-Man vs. Captain Turkish America & Santo.  The two aforementioned characters are well known Marvel superheroes and Santo is a pro-wrestler from Mexico.  Pro-wrestlers are a bit like superheroes in Mexico.  It's not the same heel / face dichotomy we have in the States.  They are masked men who are leaders in the community.

Anyway, Spider-Man is a gang leader from the far East, who is moving into Turkish mob territory and killing off the mafia, while saying things like, "Die, Mafia!"  He steals antiques and sells them to American millionaires for millions of dollars!

Let me take a step back, first Spider-Man first buries a woman in a bikini in the sand on a beach and then runs over her head with a boat propeller.  Which seems reasonable.

Some lady who works for the Turkish government is trying to get information on the goings on, when she is kidnapped and brought to an undisclosed location.  Captain Turkish America is called upon to take on the notorious villain.  He shows up, breaks through a cardboard door and proceeds to punch everyone out.

Santo, meanwhile, is investigating something or other, and shoves tons of trash down his pants before getting caught by Mr. X from Streets of Rage 2.  Before Mr. X can remove his mask, however, Santo punches him out and then is seemingly magically transported to a gym, where he works over a bunch of henchmen.  Suplexing four or five of them in a row.

Spider-Man has big plans, and no masked avengers will get in the way of that.  So, he goes to some rich lady's house and murders her with her spray extender in the shower, before stealing her priceless antiques, of course.

Cue super goofy music and lots of scenes that mean nothing to me.  That guy from Parks & Rec with the big mustache pushes guys around and pretends he has a gun in his pocket, some lady in red is followed, a guy sweeps the street for about two minutes...

Spider-Man rigs up a pretty sweet clear tube that he attaches to a guys face.  He then puts in some adorable gerbils on the other end and they proceed to eat that guy's eyes.

There is a stripper who has a hard time ripping through a screen, then Captain America and Santo fight a bunch of hoodlums in a mannequin warehouse.

There's a lot more fighting.  Julia (I don't know who that is) switches places with a Greek stripper, there's fighting, a really weird sex scene with Spider-Man which cuts to the faces of old man dolls for a moment, more fighting, and it's all good.

The Evaluation:
Watching this may be the most confusing yet hypnotic movie experience I've had in a long time.  I've really never seen anything quite like it.  The images of Spider-Man and Captain America are so iconic that I kept putting those characters into those roles,  I can see how, if you had never read any comics and were just going by the look of the costumes that you would make Spider-Man a villain, but being as how the character is so well-known, it still seems a strange choice.  At the same time, the story is so hard to follow and the dialogue is so funny that I stayed entertained for the entirety.  The whole experience made me curious to learn more about it.  I feel like it was probably a production of two or even three films that were just randomly cut together to make a feature.  Maybe they had some costumes that they felt they needed to use, and just put in the Marvel characters.  Either way, it's gems like this one that make hunting for the obscure truly a treat.


The Goods:
The bootleg is a super mess.  It starts with the subtitles in Turkish or something, then there is an awkward switch.  There are big cuts and times that the video cuts out.  But, all the better, if you ask me.  This isn't Brief Encounter, and perfection isn't the point, so the experience is richer the stranger it is.  The art on the front is also an odd choice.  I would've preferred something a little cooler, but I'm just happy to own it.

-J. Moret
And, in case you need a taste: