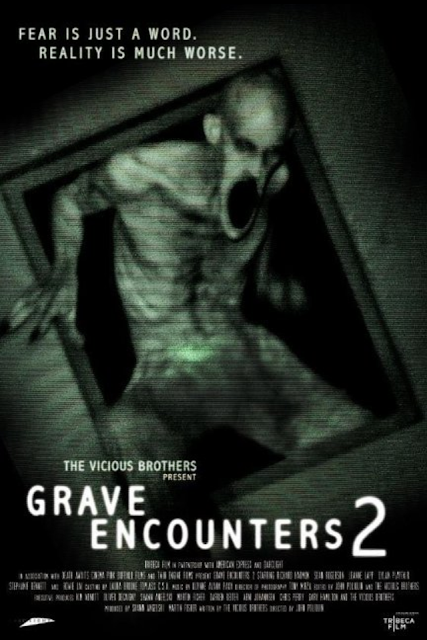 If the plan all along was for Grave Encounters to set up the much more imaginative and creepy sequel, Grave Encounters 2, then the so-called Vicious Brothers are great. However, I don’t believe this is the case. I think they just got lucky. If you’ve read my previous review of Grave Encounters you know that I thought the film had a lot of potential but ultimately fell flat. Grave Encounters 2 on the other hand is something else entirely. Creepy, fun and full of great ideas, this sequel is a much better film overall.

The movie starts off with a montage of vloggers either ripping into or praising the hell out of the original movie on youtube. The last one to review the movie just so happens to be the main character of this film, a film student named Alex. After receiving a series of strange messages pertaining to his review to the first film (a “deleted” scene, missing persons notices for the “cast”, links to the history of the hospital, etc.) Alex begins to believe that Grave Encounters actually happened. He then decides that he’ll use his film student prowess to film a documentary about his fact finding mission to prove it was the real deal. He gets his film school buddies together along with some ladies and they go to “hunt for the truth”. They drive up to Canada to meet the person sending the extremely helpful random info aaaaaand it just so happens they will only meet at the hospital…  in the basement… at night. (I mean, come on, total set up. Amiright?) So they break in, set up cameras all around the hospital (they mostly seemed to put them in the same places as the first movie) and then head towards the basement to find the informant only to find he’s not there. What IS there, is a giant Ouija board. They play along and that’s where the fun begins. A spirit starts moving the cursor around, confirms that it is indeed the informant, let’s them know to “FILM EVERYTHING” and proceeds to throw every piece of furniture in the air. Then the kids run into the hospital. Now, up until this point of the movie (about 45 minutes in) I wasn’t exactly impressed by any of this. It seemed like your typical sequel to a middle of the road horror movie. The characters didn’t seem all that great and the illusion of this being another “real” movie had lost all of it’s effect right away when I recognized the main character Alex from a canadian TV show called Continuum. Also, the character of Alex is a complete unlikeable asshole, so really this movie didn’t have a whole lot going for it in my eyes until they ran into Lance Preston, but more on that in a minute... 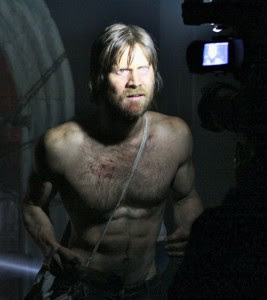 Like any horror movie the kids run deeper into the haunted hospital only to bump into the security guard. Well he gives them the whole “You kids can’t be in here! This is private property” line and is about to walk them out when Alex says that he needs to get the cameras they left around the hospital. A couple creepy noises later and the guard disappears. The group then runs to gather cameras and thats when they start getting attacked. Compared to the first movie I felt the scares were a little more thought out. Some were more creepy and slow much like what I wanted with the first movie but they still relied heavily on the shock tactics prevalent in modern day horror.

A couple of deaths later, the group ESCAPES! They go back to a hotel room they rented, pack up all their stuff and try to hightail it outta there but unfortunately the Hospital has other plans. They run into a hotel elevator only to emerge back in the hospital. Thats when they run into Lance Preston! I must say I was extremely happy they brought this character back. Here, he’s a wild man, living off of rats and constantly running from the ghosts. He explains that he’s been living in the realm of the hospital for, by his count, nine years but in reality it’s only been a couple of years. Time moves faster in this haunted realm. He goes on to tell them that the hospital is constantly shifting, that’s why there are seemingly endless hallways, doors that disappear and maps that don’t make sense. All of these are cool, welcomed concepts but are not too original. What I like about all of this is that they made the Hospital it’s own character. The stupid black magic from the first movie brought the building to life. This is exactly what was needed for this sequel. It all reminded me of a Clive Barker story. What made it more of a Barker story was the inclusion of the mysterious red door. Preston says he’s figured out the patterns in the shifting and he’s been through every door except one: a blood red door, wrapped in chains, that is free standing and seemingly leads to nothing. It’s a fun concept. All of these pieces make this movie way more enjoyable than the first. It’s more playful and really goes all out on the ideas presented in the second half of the movie. The ending is pretty decent with only the last couple minutes being a bit of a letdown.

Grave Encounters 2 starts off slower than what I would’ve liked but the second half of the movie is a fun, creepy and ultimately enjoyable experience that I would recommend if you saw the first one. The inclusion of the character Lance Preston is extremely entertaining but the rest of the characters could be thrown off a cliff for all I care. I would say check it out if you’ve seen the first and if they make a third one in this series hopefully they will continue with this trend of improvement.

-Thomas Reinert
Tom is a horror / exploitation film geek extraordinaire in Minneapolis, MN and friend of the site
Posted by Unknown at 11:37 AM