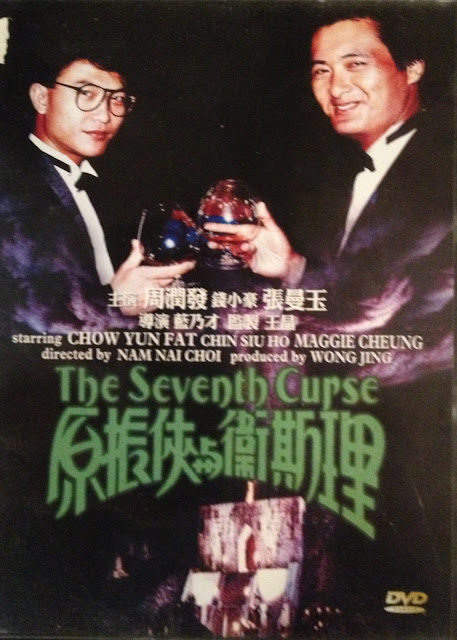 It should first be noted that Ngai Choi Lam is completely insane.  Lovably insane, but insane all the same.

He is probably best known for his ultra-violent Kung Fu prison film, Riki-Oh: The Story of Ricky.  Which, if you haven't checked out, I can't recommend it enough.  A dude gets strangled by his own entrails.

Anyway, Lam also put together The Cat (Lao Mao), which is about an alien cat who saves the world from a giant dragon.  And, it is as fun as it sounds.

The Seventh Curse is in the vein of an Indiana Jones Kung Fu spectacular.  I guess the movie that felt the most similar in the emotion I felt during watching it was maybe Beastmaster and Operation:Condor as one movie?  It's just so unconventional and enjoyable.

The Rundown:
So, it starts in a rich dude's study, as they drink brandy and discuss drinking brandy.  (you can see that image on the cover).

It then cuts to a desperate hostage situation, where a swat team is stuck outside of a large building.  A hostage needs medical attention and the terrorists ask for a doctor (Yueng Chueng-Ha).  Meanwhile, SWAT members are also ninjas and rappel into the building.  The mayhem is pretty great, and feels pretty reminiscent of John Woo.  (as does most Hong Kong action cinema of the late 1980s).  Lots of slow-motion, shooting, throwing barrels, guns firing and people getting kicked in the chest.

In the midst of all this, a reporter has snuck into the action, dressed as a nurse.  She then follows the doctor to a pool-side cocktail party for some reason or other, and then pushes a waiter into the pool, yelling, "Idiot!"  The doctor is shocked to find a naked woman back at his house, and cool soap opera music plays.  Then, he gets attacked by a guy in a multi-colored vest, and they ruin all of his glass coffee tables.

Apparently, this guy just wanted to deliver a message that the doctor needs to go to Thailand, because his ghost spell is about to relapse.  So, naturally, he goes to see Chow Yun Fat, and then we get the whole story, in weird flashback vision.

The doctor stabs a walking skeleton in the mouth with a big knife to save a lady he has the hots for. She was being sacrificed to the Old Ancestor. Out of it comes a giant alien-predator-dragon deal, and it's kind of upset.

The Priest in charge of the sacrifice kind of looks like Johnny Depp as Tonto.  And, by that, I mean not good.  Anyway, he puts a bunch of worms on the doctor's friend, and he sort of... explodes.  The doctor escapes, but has the worms in him, so he's naturally worried about exploding.  He finds the lady he has the hots for, and she gets naked, cuts her boob and pulls something out of it, that she then puts in the doctor's mouth.

That all happens in the first thirty minutes.  What I'm really trying to get across here is that this movie is crazy.  Every moment something crazier than the last happens.

Ngai Choi Lam set out to make his own Indiana Jones movie.  What came out is one of the wildest things I've ever seen.  At the brisk pace it moves, it must have been a challenge not to lose the audience.  And, if I hadn't been acquainted with Lam before this, I may have been shocked.  Instead, it felt like coming back to a friend who I had missed.  The action is impressive (and often out of nowhere), the acting seems as though the only direction was, "look confused," and the violence is funny (for instance a henchmen is shot by a giant shotgun and then while still in the air is hit by an arrow).  There seems to be no limitation to Lam's imagination.  He seems to know exactly what he wants and does it fast.  I would say that his films are absolutely perfect for what they are.  If you want non-stop excitement and being surprised at every turn, you can do no better than The Seventh Curse.

Set Yourself Up:
The Goods:
The DVD is presented in widescreen 4:3, most likely a 2:35 print made to fit a bubble tv.  No special features to speak of, but the film is special enough.  Unfortunately, you'll probably need to spend a minimum of $20 to buy it used on Amazon or Ebay, as it's been out of print forever.  The VHS goes for about $40.  That being said, I don't see this one getting re-released any time soon.