Review: CEMETERY SISTERS (aka Sisters of No Mercy) 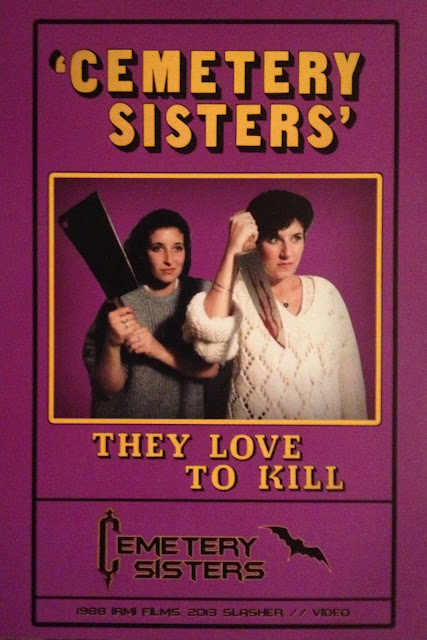 Nick Millard's films are bad.  I don't mean that they're un-likeable, just... Bad.  Matt has reviewed Death Nurse and Death Nurse II, which you should check out, as it will give you some insight as to the type of films Millard is known for.

Where the Death Nurse series will break your soul in half by being insane, Cemetery Sisters is more logically put together and not near as much of a mess.  In that way, it's much easier to watch, and the acting stands out so much more.  I would say the film is maybe 40% padding, where Death Nurse felt like 80%.

This is the type of film that really challenges the notion of loving something ironically.  Sure, it's terribly made and super goofy.  But, there is something super charming about Millard's lack of inhibition.  But, this one separates casual lovers of "bad movies" to the true admirers.

The whole thing feels so improvised and on the spot.  His stuff is completely without formula.  There is no sense of direction or pre-determination.  It all feels spontaneous. In that, it's exciting in it's own way.  And, we get more re-used footage from Criminally Insane, which feels hilariously out of place.

The Rundown:
A sweet little car with JUST MARRIED duct-taped to the side of it pulls up to the Death Nurse house.    Inside, Leslie (she's the one with the massive cleaver in the background) makes her new husband (played by Nick Millard) tell her he loves her and then Joan (short-haired on with the bloody knife) comes running out of nowhere to STAB HIM TO DEATH!  She proceeds to stab him probably about 45 times.  It takes a really long time, causing Leslie to ask, "Did you have to stab him so often?"  Not sure often is the correct word in that situation...

They then use a sweet calculator with a printer, you know the kind, in their home office to calculate how much money they will make off of the dearly departed husband.

Joan sharpens her knives for about two minutes.  Then, they head to Las Vegas for Joan's wedding to another rich jerk.  Leslie asks to get out of the car to take a pee, and then STABS THE JERK TO DEATH!

Leslie puts out an ad in the paper and Joan makes a video for a dating company of some kind.

Then, Leslie is in Vegas again, this time with a frat guy who wears a nice sweater.  The next morning Leslie brings him breakfast in bed.  She calls him, "boy."  Unsure if that's his name or if she doesn't know it.  The eggs look pretty gross.  They're purple, sort of.  Then Joan STABS HIM TO DEATH!

You can see where this is going.  You probably want to know why they're doing this.  Well, Their father was the owner of a mortuary and all of their friends were dead people.  They want to be morticians, just like their father.  So, they are killing a lot of men so they can open up their own.

Things get complicated when Auntie Lust (Irmgard Millard, who was also producer of the film aka Louise from Death Nurse!) comes to visit them and they need to dispose of a body.  How will they accomplish such a feat?  At the same time, Joan is out with scum-stache man for dinner, and Auntie makes a lot of strange sexual comments.

The Evaluation:
This is one of the more enjoyable "bad" films I've seen in awhile.  Filmed at Millard's house in San Francisco during the same year he did Death Nurse II, it feels like you're a part of the intimate group.  The sisters are played by real-life sisters Joan and Leslie Simon, and their on-screen presence is pretty charismatic.  Millard refers to the movie as a "black comedy," and it does succeed on that level extremely well.  I certainly laughed a lot.

The Goods;
Slasher Video is top notch with all of their releases.  Something like this film probably has very little to draw from and yet he puts together some really nice special features.  You get a commentary (which is great), a new short from Nick Millard called Death Sisters (which is really something), a Q & A, photo gallery, trailer and hidden features.  For any real lover of the obscure, this is definitely one to pick up.

For some reason, the trailer for Cemetery Sisters won't imbed here...  But, here's the link:
http://www.youtube.com/watch?v=2BKB_ar1yNg