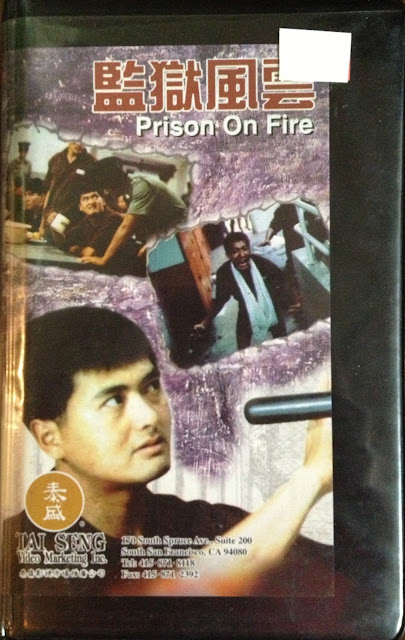 I was first introduced to Ringo Lam through the amazing Full Contact.  In the same realm as John Woo or Johnnie To, Lam is best known for crazy, well choreographed action sequences.

Similar to Woo, Lam later made it to the states, only to become part of a string of disappointing straight to video Van Damme movies.  Prison on Fire is different.  Similar to The Killer or Fulltime Killer, it is a great film, pushed forward by outstanding performances of its' leads, and would never have been as good if it were made in the States.  Playing against type, Chow Yun-Fat is super charismatic and funny as prisoner 41671.

The Rundown:
Yiu (Tony Leung Kai Fai) has been wrongfully sent to prison, and is trying his best to keep his head down and get through it.

Recognizable tropes from the intake process to cleaning the bathrooms to dealing with prison gangs are in store for Yiu. Along the way, Prisoner 41671 (Chow Yun Fat) and Yiu become friends while 41671 is pooping.  Dudes play basketball, buy illegal cigarettes and riot.  All the while, Yiu is doing his best to not be involved.

Pretty much, it's like the first half of Shawshank Redemption, but in Hong Kong, and there is cool fighting.  41671 gets his scissors stolen, which is serious business, and Yiu rats out the thief.  Now that he's pegged as a rat, he's dead meat.

One thing leads to an a genuinely touching scene with Chow Yun-Fat and his son which leads to an awesome fight in the laundry room which leads to Chow Yun Fat getting sliced in the stomach with a giant piece of glass.  Mickey, the gang leader, is transferred and things for Yiu and Chow get easier.

Up until this point, the movie is very slow-burn.  There is very little action, and it's mostly just enjoyable character development.

It then cuts to One Year Later and Mickey is returning.  Mickey frames Yui and 41671 as rats, and their lives are again in danger.

What commences is brutal and completely satisfying.

The Evauluation:
I wasn't expecting a smart, insightful film about prison politics and the nature of guards over inmates.  However, once my expectations changed, I was able to fully appreciate this film for what it is.  Excellently put together, it plays like a classic film, in the vein of Cool Hand Luke or One Flew over the Cuckoo's Nest.  Chow Yun-Fat's performance is incredible, and makes for the backbone of the film.


The Goods:
The Tai Seng VHS may be your cheapest option, but I wouldn't say it's high quality.  The pan-and-scan is pretty annoying and they cut off the end of the credits pretty abruptly.
But you get a pretty cool pirating warning.  They give you a number to call, and all information stays confidential.  Call 1-800-888-3836 if you see anyone bootlegging cool VHS tapes.

- J. Moret
and, here is a crazy long trailer for you: