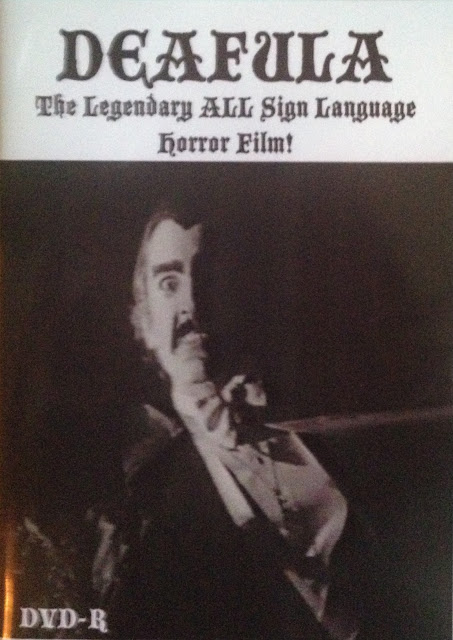 I had given up hope finding a copy of this film.  Originally I had seen a clip from it in high school when Matt and I were looking up Blackula on YouTube.  What we saw was incredible.  A film meant for the hearing impaired, where all communication between actors was done through sign language.  It is the only film to ever be presented in Signscope.  (Why subtitles didn't accomplish the same thing, I'm not sure.  But, I guess when there's some angle to exploit, you can count on it being done.)

Matt and I were both entranced by the strange idea that there could be such a movie.

And now, after about twelve years, I have finally seen it.  Actually watching the film is a surreal experience.  At times, it seems you are watching a silent film, shot on grainy black and white.  It feels old.  Almost a bit like watching Murnau's 1922 masterpiece, Nosferatu.  There are long sequences with no sound at all.  The acting seems similar to silent film era acting as well.  Overly expressing emotions, letting facial expressions speak for themselves.  Likewise, the camera takes time to let the dialogue be seen.  The voice-over for those of us that can't read sign language is rather awkward.  It feels like bad dubbing.

Where the film-making gets extremely interesting is when it gets to a bar scene, and the camera moves around from group to group.  It lingers on certain tables an then cuts them off mid-sentence, illustrating how much filmmakers depend on sound to keep the camera movement smooth.

At the same time, there is some pretty fun filmmaking when Dracula is hunting his victims.  Actually, pretty much every scene with Dracula is super amazing.

The Rundown:
Vampires are causing problems.  Two detectives are hunting for the solution.  The somewhat dim-witted English detective is sure it's Dracula from the beginning, because he is from... England, I guess.

Steve Adams (director, writer, producer Peter Wolf) has Saved by the Bell style watery flashbacks and remembers that he totally ripped the throat out of a puppy when he was a kid.  His father (a preacher) has been giving him blood transfusions since he was a boy, and now he's thirty.  He has started to hear about the bite marks on people's necks and begins to worry about himself.

Dracula (Eddie Munster, Magnum P.I.) mind-control's some sweet biker-murderer to drive off a cliff with his girlfriend.  (Wolf seems to just throw a camera off a cliff).  He then bites a dude with a killer Afro and then convinces some at-risk-teens to stab the body a bunch of times to throw the detectives off the scent.

Steve's preacher dad has a heart attack while Steve is off gnawing on a co-ed in a bikini, and the Dracula-obsessed detective is on to him.  So, Steve goes to a guy who has no hands (but big soup cups instead).  There is a super confusing conversation about a disappearing ring or something.  Anyway, he finds out that his mom had the hots for Dracula, there is a big time spoiler and now he wants revenge!

How are the goods?

Quality is about what you'd expect.  I'm sure the original negative was poor quality, and Trash Palace definitely took this bootleg from a VHS.  So, imagine a VHS bootleg of a badly shot 16mm film.  I must say, that really adds to the effect for me, though.  There is no need for a high definition Deafula.