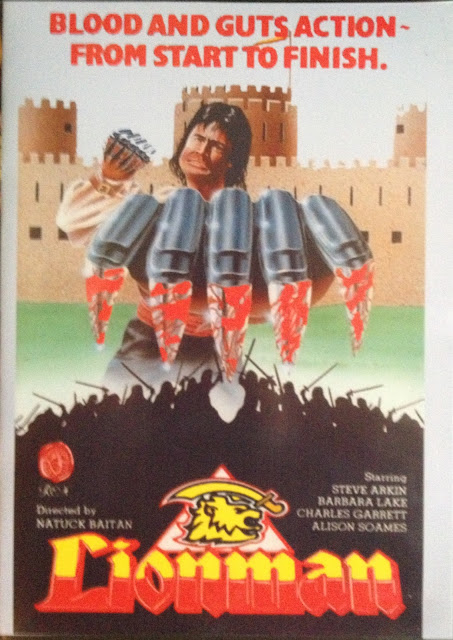 Baytan seems to be a shlockmeister in the same realm of amazing as Bruno Mattei.  Releasing as many as four or five films a year throughout the 1970s, his filmography is massive.

Turkey's film industry is best known for it's weird rip-off films (Such as the infamous Turkish Star Wars).  Lionman is different, in that it's an original film.

The Rundown:
Medieval Ottoman Empire(esque) fighting with killer music starts us off.  A bunch of dudes are shot down with bow and arrows.

Some lady is forced to marry old Anton (Grand Moff Tarkin- looking dude with a mustache).  Anton is a bloodthirsty bastard who hates facial hair that covers more than just the upper lip.

The best sword-fight to goofy music in film history ends with a bearded gray dude (Solomon) getting his arms cut off, but his pregnant wife escapes into the forest with Toad from Mario Bros.  She has a child and immediately dies...?  So, Toad does what any good steward of a small baby would do, he takes the baby into the forest and just lays it down somewhere.

Well, lions find the baby and Toad gets all sad that the baby is going to get eaten.  Anton drinks to his victory  and gets with his new wife.

Cut to... ten years later?  The baby is now a boy and pets baby lions while feeding them raw meat.  Toad waits expectantly for someone to be born with the birthmark of the Solomon.

Then, suddenly he's LIONMAN.  He's surprisingly well-shaven and sports a David Hasselhoff haircut.  Imagine a mix of Andre the Giant, Bruce Campbell and Tarzan.  Anyway, he runs up to an antelope and karate chops that bastard, and then he eats his raw flesh.

Having a deep sense of justice, Lionman attack's Anton's men as they try to rape and pillage a small village of gypsies.  He tears a tree out of the ground and then suffocates four of them at the same time with a big branch.  He even kills a dude by pie-facing him.  It's all done to the amazing tune of goofy classical music.

A hot gypsy lady (Solomon's daughter) sets up Anton's son, but Lionman, not knowing the politics of the moment, saves the dude and then throws a bunch of gypsies in the drink.  Solomon's daughter and Lionman fall for each other and then...  she literally stabs him in the back with a huge cleaver before seeing the birthmark of Solomon.


From there, the story seems to be pretty obvious, but it's the surprising amount of action, violent surprises, metal hulk gloves, confusing dialogue, scratching people to death, trampoline fight scenes, and ridiculous music that make it so special.

The Evaluation:
Lionman is supremely fun.  It feels a bit like watching Monty Python and the Holy Grail, except that it's a serious action film.  I think the high point for me was the knife fight in the dungeon with the tiny knives.  There is a ton of somersaulting, flipping, and at times you can see the mat on the floor.

There is not a single dull moment.  Right when you think it's about to fade, Lionman uses rings and does some awesome gymnastics fighting while Toad fights off a bunch of evil-doers with a big chain.

The Goods:
I picked up this Trash Palace bootleg DVD at Laurie's Planet of Sound in Chicago.  The quality is about what you'd expect from such a release.  It's definitely taken from a VHS, but the sound and video are good. I will definitely be hunting down more of their bootlegs.

You can also watch the whole thing on YouTube, in 8 parts: