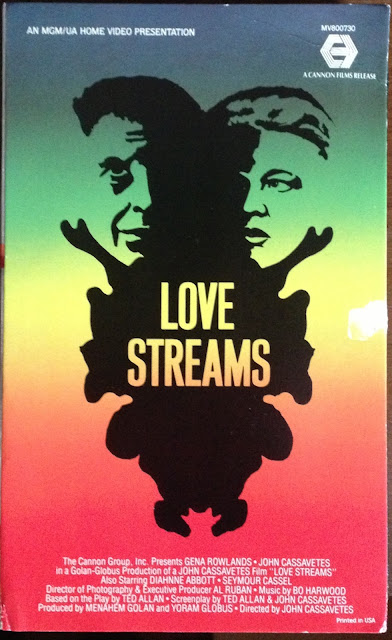 The 1970s was a golden age for American Cinema.  John Cassavetes should stand up next to Robert Altman  as one of the reasons that is so.  Unfortunately, he is too often over-looked by the likes of Spielberg, Coppola and Scorsese.  He is in every way their equal, but chose to work in decidedly unmarketable territory... reality.  Love Streams was made in 1984, but comes directly out of that 1970s tradition of character driven story-telling.

Cassavetes was famously generous.  He often worked with a small group of performers and friends.  His wife, Gena Rowlands, was a brilliant actress that often led the troupe both on and off camera.  They were known to work in their home, often cooking themselves for the cast and crew.  Some of them would live with the couple in hard times.  Cassavetes acted regularly in mediocre (and some brilliant, ie: Rosemary's Baby) films to fund his small budget, completely independent directorial efforts.

His films range from jazz surrealism (Shadows) to reflexive stage drama (Opening Night).  They are about social structures, family, love and the quiet moments we each have in our solitude.  And, every one of them is infused with compassion and humor.  He pulls the best possible performance out of every actor.  As a viewer, you almost feel as if you know each and every character.  You also feel as though you are watching a very rare performance.  The only other experience I can compare it to is P.T. Anderson's ability to draw out Daniel Day Lewis in There Will be Blood or Joaquin Phoenix in The Master.

Unfortunately, this film isn't available on DVD in the States.  That's absolutely ridiculous.  I really don't get it.  How is it that Caddyshack gets like 7 releases and this languishes in a dying format?  So, you either need to be willing to shell out some cash for a region-free DVD player or get it on VHS.

The Rundown:
In the vein of Cassavetes' A Woman Under the Influence, Love Streams is about mental illness and those who love the mentally ill.

Cassavetes plays Robert Harmon, a wealthy philandering writer who has no real commitments of any kind.  We see him in bed with two women as a third answers his door.  His life is made up of constantly feeding hedonistic inclinations.

Gena Rowlands plays Robert's sister, Sarah, and is mentally ill.  She is currently going through a divorce with her husband Jack (Cassavetes regular, Seymour Cassel), who has been unfaithful.  Her daughter chooses to live with Jack, and Sarah is completely destroyed.

It is a true vision of illness.  A film like Silver Linings Playbook is a sweet-natured little film, but it is in the end just a romantic comedy with lovable characters.  Robert and Sarah, on the other hand are not stuck in a formula.  We have no idea how their journey will end.  Ultimately, they are both mad and have so little to rely on, outside of their love for one another.  Sarah begins with a declaration and by the end the sentence turns to a question.

"Is love a continuous stream?  Does it stop?"

The Evaluation:
The BFI put this film as one of the top 250 films of all time (no. 231 to be exact), and it absolutely deserves it.  In reality, I think a number of his films deserve to be on that list.  (Faces being my favorite).

This film is two and a half hours of living with very flawed, real people.  It is, at times, excruciating.  Such as the scene in the backyard of Jack's house where Sarah tries desperately to make her husband and daughter laugh, and instead they stare blankly, without mercy.  Rowlands is so in tune with her character that I began to see her as Sarah by the end.

Cassavetes performance is a tour de force of hard emotional avoidance.  However, his performance is also funny and compassionate.  At one moment, he turns to his son that he hasn't seen since his birth (while giving him beer for breakfast) and explains, "I don't like men.  I don't make any money on them.  They're not interesting to me.  Someday, when you're 14, go hitch-hike across the country and see real men.  Not the ones here in suits.  See what they're really like."  A few moments later, he leans back and says, "I don't like women anyway, you know.  I like kids and old people.  They don't need anything.  They're innocent."

Matt and I had a conversation a little while ago about how we feel about comedies.  For the most part, they fail because you don't care about the story or what happens to any of the characters, you just wait for the next punch line.  The better option seems to be to make a drama or action film or whatever and add comedy.  This film is the perfect example of that.  The funny moments are so funny, simply because you are so invested.  In fact, the physical comedy here is far funnier than anything in a Woody Allen comedy.

Get yourself ready for 1980s decadence: